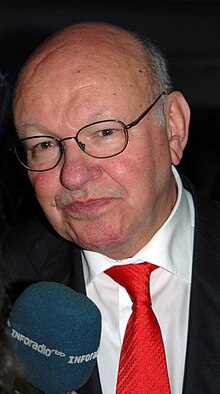 Walter Momper (born February 21, 1945 in Sulingen , County of Diepholz , Province of Hanover ) is a German politician ( SPD ) and political scientist . From 1989 to 1991 he was the 11th Governing Mayor of Berlin . The turning point and peaceful revolution in the GDR with the fall of the Berlin Wall and German reunification coincided with his term of office. From 2001 to 2011 he was President of the Berlin House of Representatives .

Momper spent his school days in Bremen . After graduating from high school in 1964, he began to study political science , history and economics at the Westfälische Wilhelms-Universität Münster , in Munich and at the Free University of Berlin , which he completed in 1969 as a political scientist.

He became a research assistant at the Institute for Political Science at the Free University of Berlin. In 1970 he moved to the Secret Prussian State Archives of the Prussian Cultural Heritage Foundation as a research assistant . From 1972 to 1986 he was a scientific employee and managing director of the Historical Commission in Berlin . After Momper was then exclusively politically active, he took over the management of Dr. Ellinghaus GmbH, a real estate company founded by the former SFB journalist and CDU member Gerd Ellinghaus. Since August 1993 he has been the managing partner of Momper Entwicklungsgesellschaft mbH in Berlin. Journalists and politicians, including the SPD, criticized the link between his political and entrepreneurial activities, for example when he advised the Ikea furniture company on its settlement plans in East Berlin.

In the 1989 election to the Berlin House of Representatives , the SPD emerged victorious under Momper's top candidacy , while the CDU / FDP coalition under the Governing Mayor Eberhard Diepgen (CDU) surprisingly suffered a heavy defeat. This was preceded, among other things, by the scandal surrounding the Charlottenburg City Councilor Wolfgang Antes (CDU), which was widely discussed in the media .

On March 16, 1989 Momper was elected mayor. He was able to rely on a red-green coalition between the SPD and the Berlin State Association of the Greens ( Alternative List) . The Momper Senate was the first state government in Germany to have more women than men (eight to six).

The chairman of the GDR Council of Ministers, Hans Modrow , Federal Chancellor Helmut Kohl , the Governing Mayor (West Berlin) Walter Momper (with daughter Friederike) and in the background between Kohl and Momper the Lord Mayor (East Berlin) Erhard Krack during the opening of the Brandenburg Gate on December 22, 1989

On the night of November 9-10, 1989, the Berlin Wall was opened - an event that the GDR government Momper claims to have been preparing since October 29, 1989 from a conversation with East Berlin's SED leader Günter Schabowski and the Lord Mayor of East Berlin, Erhard Krack , was informed and, in turn, made appropriate preparations. Momper's sentence “Berlin, now rejoice” went around the world. During this time, Momper became known beyond the borders of Germany. The basis for the growing together of the two halves of the city and Berlin with the surrounding area was laid on December 12, 1989: At a meeting Momper with DDR - Prime Minister Hans Modrow , the provisional Regional Committee was established as the first cross-border committee.

As the Governing Mayor of Berlin, Momper was President of the Federal Council from November 1, 1989 to October 31, 1990, and thus deputy to the Federal President.

Well-known decisions of his red-green Senate were a speed limit (100 km / h) on the AVUS , which had previously been free of speed limits, and the establishment of additional bus lanes for the BVG , Berlin's local public transport . After the end of a series of squatting by the evacuation of Mainzer Strasse by the police on November 14, 1990, the AL terminated the coalition with the SPD, as both Momper and the responsible interior senator Erich Pätzold (SPD) classified this operation as politically correct .

In the election of the governing mayor on November 23, 2006, the proposed SPD candidate Klaus Wowereit received only 74 of 149 votes. Although the required majority of 75 votes was not achieved, Momper asked Wowereit if he would accept the election. After that, Momper was about to take the swearing-in when he was pointed out to his mistake by heckling. The Berlin opposition parties then demanded his resignation as President of Parliament - also because Momper's swearing-in ceremony after the successful second ballot did not go smoothly. Momper publicly apologized but declined to resign.

Momper regularly appeared in public wearing a red scarf called the "Momper Scarf". The host of the Joe am Wedding nightclub gave it to Momper in 1989 when the red-green coalition celebrated its election victory there. Walter Momper is married to Anne Momper and has two children.

After the popularity of the former political nobody rose in the course of the fall of the Berlin Wall, the satirical magazine Titanic published regular "Mompersammelbilder" in which the ruler was depicted in particularly funny-looking poses.

President of the Berlin House of Representatives