Sulingen is a small town in the center of the Diepholz district , 50 km south of Bremen .

Core city and the localities of Sulingen

Sulingen consists of the following districts (population figures in brackets)

Sulingen is traversed by the Sule , the Kuhbach , the Kleiner Aue and the Allerbeeke (this is partly the eastern border river to the Siedenburg municipality ).

On May 30, 1029, the Sulingen settlement was first mentioned in a document. In this first document a castle-free upper court of the diocese of Minden in Sulingen was mentioned. The episcopal Oberhof fell to the county of Hoya at the end of the Middle Ages . Around the Oberhof formed in the late 15th century, the spots Sulingen. Presumably because there was no castle in Sulingen, the place was neither the seat of a bailiwick nor an office for a long time , but belonged to the Ehrenburg office , but was the most important place within this office.

In the years 1347 and 1349 Sulingen was ravaged by the plague . Only 27 families are said to have survived.

Sulingen was from 1300 to 1527 district of the archdeaconate . The archdeacons (from 1381 the Minden cathedral provosts) exercised ecclesiastical jurisdiction. With the Reformation the diocese of Minden with the diocesan part of Sulingen became Evangelical-Lutheran by the Minden prince-bishop Hermann von Schaumburg . Now a Protestant superintendent was responsible for Sulingen.

The first school was built in Sulingen at the beginning of the 17th century. Black plague, looting, pillage and billeting shaped the time in the Thirty Years' War (1618–1648).

At the beginning of the 18th century the superintendent, the cantor house, the council cellar and the house of J. Dencker burned down. On September 12, 1719, another major fire led to the almost complete destruction of the place. The church registers preserved today do not begin until 1719, supplemented by the so-called soul register (“referendum” by the pastor according to the names and dates of the residents).

The engineer-lieutenant Eden, who drew the city maps before and after the fire, was commissioned with the reconstruction. In the 18th century the place had five scythe smiths and new guilds were formed. In 1779 the Lüning grain distillery was established. In 1791 Chr. Friedrich Lüning received the post office certificate for the route Hanover-Nienburg-Sulingen-Diepholz-Osnabrück. At least 16 horses had to be entertained in the relay station. Lüning's property was designated as a manor after the purchase of the property opposite. On June 3, 1803, the Sulingen Convention was initialed, the ratification of which was subsequently refused by Napoleon, so that the surrender of Kurhannovers was only completed by the Artlenburg Convention on July 5, 1803.

In 1852 the royal Hanoverian office of Sulingen was formed with a district court . After the annexation of the Kingdom of Hanover by Prussia in 1866, the Sulingen district was established in 1885 . The first savings bank was opened and two public parks were created. Sulingen received a telegraph station, the first hospital and the power station on Südstrasse. The adult education center at Mühlenhof and a commercial vocational school were built. 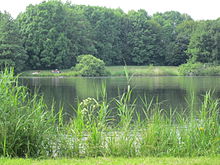 Dredged on the occasion of the construction of the bypass road: the city lake

The Rahden-Sulingen railway line was opened on September 29, 1900. In 1901 the line Sulingen - Bassum followed with a connection to Bremen . The place developed into an outlying train station. In 1904 the Sulinger Nachrichten came out. Electric street lighting began in 1911. Since 1925 there was a middle school in Sulingen. In 1927 the district hospital on Schmelingstrasse with 42 beds was put into operation.

As a result of the merger with the then Grafschaft Diepholz district, Sulingen had to give up the district seat for the Sulingen district to Diepholz in 1932 .

In 1929, 900 years after it was first mentioned, Sulingen was granted town charter . From 1923 to 1997, Sulingen was a railway crossing point thanks to another railway line that led from Nienburg to Diepholz . The last passenger train left Sulingen in 1994.

In 1990 the city lake was dredged in the course of the construction of the bypass road, which keeps traffic on federal highways 61 and 214 away from the built-up urban area .

The 27 seats of the city council are distributed as follows:

Previous mayor of the city

The exact meaning of the coat of arms is not known. It is assumed that the coat of arms carried by the city of Sulingen with the heraldic bear paw facing outwards and the broken letter "S" is only a local coat of arms, which indicates the former jurisdiction of the Counts of Hoya , who turned two away in their coat of arms Bear claws lead.

The logo of the city of Sulingen consists of a yellow and a red semicircle. In the yellow semicircle the outward facing bear claw of the city coat of arms is indicated.

Sulingen has partnerships with the Danish Galten (since 1986) and the Lithuanian Joniškis (since 2000).

Museum at the city lake

The Museum am Stadtsee is located north of the landscape and recreational lake “Stadtsee” and southwest of the Sulingen town center on the corner of Kurz Heide and Bachholzer Riede. The museum is supported by the Sulingen Heimatverein. A permanent exhibition is presented by a kitchen, a bedroom from 1924, a living room, a typesetting with a printer and a shoemaker's workshop . There are also changing exhibitions with main themes.

Museums in the Diepholz district

The city ​​archive is the administrative archive of the city of Sulingen. It is, so to speak, the “memory” in which the historical files (the archival material ) of the city of Sulingen are properly archived - collected, sorted and organized - and made available for viewing by users. For example, files, maps , documents , bequests and old editions of the regional newspapers are available for researching pupils, students, scientists and authors in the city archive . These unique items - this cultural asset - are housed in the community center, Lange Str. 67.

Municipal archives in the Diepholz district

The Jewish cemetery in Sulingen is a cultural monument . It is one of eight well-preserved Jewish cemeteries in the Diepholz district. There are 30 gravestones from the years 1844 to 1934 for the Jewish deceased in the cemetery on Memelstrasse .

Scattered are very different sculptures and objects by artists from the region:

Cinema in the town center (“Filmpalast Sulingen”) with three halls.

Sulingen is the headquarters of Volksbank eG, Sulingen . The largest employer is the shoe manufacturer Lloyd with currently around 550 employees, but in July 2020 the cessation of shoe production at the Sulingen location as well as a reduction in administrative staff were announced.

A large number of local companies have joined forces in the Initiative Sulingen association in order to coordinate specific projects and advertising measures.

The Informa Sulingen trade fair takes place regularly in Sulingen . More than 130 exhibitors from the region will be presenting themselves for the 10th time in 2010 on approx. 14,500 m² of indoor and outdoor space. The fair is visited by around 20,000 visitors on a total of three days.

Sulingen was awarded the Eurosolar German Solar Prize in Saarbrücken in November 1997 for its extensive initiatives .

Since the bypasses were released in 1991 and 1993, federal highway 214 has been running south of the center of Sulingen and connects the district town of Diepholz to the west with Nienburg (Weser) to the east. The federal highway 61 also creates a bypass connection to the north to Bremen and to the south to Minden .

There are the following bus routes from Sulingen:

The tariff of the Bremen / Lower Saxony transport association applies on the bus routes . There are also many school buses that go to Sulingen.

Today Sulingen is only connected to goods traffic. There is a rail connection to the route used by ExxonMobil sulfur and oil tankers via Sulingen, where the direction has to be changed, to Barenburg . There were plans to connect this branch of the line from Diepholz to Sulingen to the south-west via a connecting curve ( south loop ) with the one going south to the Exxon-Mobil company in Barenburg on the Bassum-Herford railway line north of Rahden, which was otherwise largely dismantled , in order to change the direction of travel avoid. The extensive, former station and track area is to be built on. A decision has not yet been made on the construction of the Südschleife. In the meantime, a report by the German Aerospace Center commissioned by the Lower Saxony Ministry of Economics recommends maintaining the route as an alternative route for freight traffic with the seaports. On the other hand, the chances of this are estimated to be rather low.

History of the Sulingen Cross

Sulingen used to be reached from four directions. The railway connection from Bremen to Bielefeld ran from north to south via the Sulinger Kreuz . Continuous hedge cable trains ran on this route from Cuxhaven , Bremerhaven or Wilhelmshaven to Frankfurt am Main , Paderborn or Hamm . Passenger traffic on the Bassum - Rahden railway , which was part of the aforementioned Bremen-Bielefeld connection, was discontinued in 1994, and freight traffic followed in 1997. Sulingen was also on the Diepholz - Nienburg railway from west to east . Passenger traffic was stopped here in 1966 on the western and in 1969 on the eastern section, and goods traffic to Nienburg in 1997.

Sulingen is a hospital location. The clinic is part of the Diepholz district clinic network . As an accident clinic, it was given a helipad.

Honorary citizen of the city

People who worked in this city