Lembruch is a municipality in the district of Diepholz in Lower Saxony ( Germany ). The place is officially recognized as a resort .

Lembruch is located in the Dümmer Nature Park directly on the eastern shore of the Dümmer between Osnabrueck and Bremen . The community belongs to the Altes Amt Lemförde , which its administrative headquarters in the spots Lemförde has.

In the 13th century there was a southern border castle of the noblemen of Diepholz in Lembruch , until it was moved to Lemförde in the course of the expansion of the rule . Material from Lembruch Castle ("Castrum Lewenbrock"), which is no longer needed, is said to have been used to build Lemförde Castle. Lembruch Castle is still mentioned in 1305. Later all the remains of the castle disappeared.

The local council from Lembruch consists of 11 councilors, who are organized in a voter community .

In 2003 the Dümmer Museum was reopened. It shows permanent multimedia exhibitions on the subjects of "landscape development", "flora and fauna" and "Stone Age settlement sites".

Every year on the last weekend in August, the big event Der Dümmer brennt takes place. On Saturday evenings the big brilliant fireworks are right over the lake.

The local carnival association takes part in the Dammer carnival parades once a year. 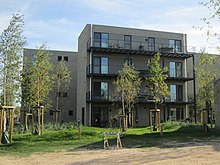 At the beginning of the 1950s, after the dyke construction work was completed (1952), a tourism boom began. As early as 1948 there was the striking, thatched “turret with the clock” and a large jetty at the Grawied estuary. 1957 followed the construction of the large gabled roof house "Hotel Strandlust" in a regionally based " Heimatschutz Style ", which is still recognizable today despite many renovations. The old boat harbor received a crane in 1966 and was fitted with a sheet pile wall in 1974. In the meantime, however, the "Seeblick" boat harbor (opposite the sailing school) is significantly larger. From an economic point of view, tourism is of the greatest importance because of the stupid situation, but there is also a boatyard and a large fish smokehouse.

The tourism industry receives a strong impetus from the construction of the “Marissa Park”, a new settlement with 476 holiday houses and apartments in the south of the Lembrucher Dümmerufers. The holiday park, which is in the process of being built, extends over 18 hectares on the site of the former Schoddenhof. The plant should be completed in 2021.

The federal highway 51 ( Diepholz - Osnabrück ) runs to the east in the immediate vicinity . Passenger trains stopped at Lembruch station on the Osnabrück - Diepholz - Bremen line, which is conveniently located close to the Dümmersee recreational area, until 1984. The train station is now a pure depot.