Twistringen ( Low German Twustern ) is a town in the Diepholz district in Lower Saxony . It is located around 30 kilometers southwest of Bremen on the south-eastern edge of the Wildeshauser Geest local recreation area . The Delme rises in Twistringen .

Core city and the localities of Twistringen

Twistringen is located 30 kilometers southwest of Bremen , 25 kilometers northeast of Diepholz and 40 kilometers west of Nienburg . The Delme flows through the urban area to the north and the Heiligenloher Beeke , which flows into the Hunte, flows to the west through Heiligenloh .

The town of Twistringen consists of eight localities, each with a local council .

Steel sculpture "Goldregen" above the Hunte to the south of the "Golden Bridge", which forms the border between the Rüssen and Goldenstedt district

Twistringen has gained national importance in geological terms. Until the 1990s, clay stones were mined in the pits of the Sunder brickworks on the outskirts . These are sediments from the primordial North Sea that were deposited in the Miocene , a stage of the Tertiary Age . This site is type locality of the Twistringer strata, a section of the Reinbek-Dingdener stage. The age of these deposits from the Middle Miocene is about 15 million years.

In the claystones there was a very diverse fauna of snails , mussels , burial pods (scaphopods) and corals . Sea urchins , vertebrate bones and teeth and cephalopod remains were less common . Overall, the fauna was small and not very spectacular. But due to the biodiversity (there are more than 250 species of snails from the Twistringer layers known and described), such an exact picture of the animal world of that epoch emerges that Twistringen is now one of the classic sites of paleontology . Finds from Twistringen can be found in numerous museums and private collections.

Development of the place

Twistringen was first mentioned in a document around 1250 as Thuisteringe . This document names all the places that had to make annual contributions to the maintenance of the Weser Bridge in Bremen.

A parish was in Twistringen been about 825. After the Christians in Niederstift Munster , the twist rings in the 16th century belonged, by Lutheran preacher in the wake of the Reformation strongly within the meaning of the Protestant denomination had been affected, the parish Twistringen was from 1668 successful re-Catholicised . In the evangelical region , initially Hanoverian (until 1866), then Prussian (until 1946) and finally Lower Saxony (since 1946), the parish of Twistringen has been a Catholic enclave and the seat of a deanery for centuries .

Until 1811 Twistringen belonged to the Vechta dominion in the Niederstift Münster. In 1811 the place became part of the " Départements de l'Ems-Supérieur " established by Napoleon I. During the French period (1811–1813) the place received a more modern road connection with Napoleon Street (today Bundesstraße 51 ).

In the course of the reorganization of Europe by the Congress of Vienna and after border negotiations between the Grand Duchy of Oldenburg and the Kingdom of Hanover , the political municipality of Twistringen was assigned to Hanover in 1817. The Catholic parish became part of the Osnabrück diocese in 1824 . Only with the construction of the Bremen-Osnabrück railway line (opening on May 15, 1873) did Lutherans settle again in Twistringen. They founded an Evangelical Lutheran congregation in 1891 and inaugurated their own church in 1894.

In Twistringen there was also a small Jewish community and until 1938 a synagogue , which is now remembered by a plaque. There is also a Jewish cemetery outside the town center . 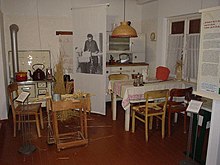 Kitchen from the 1950s in the Museum of Straw Processing: Home-made drinking straws

For centuries, straw processing played an important role in Twistringen . At times a third of the population (in factories and home work) was employed in this branch of industry. Manufactured u. a. Straw hats, jackets for wine bottles (so-called malottes ) and drinking straws. The articles were exported to numerous countries. The Museum of Straw Processing documents the history and development of this industry from its beginnings to the present.

To celebrate the 750th anniversary of the city of Twistringen in 2000, a huge straw hat was made in front of the town hall, which earned an entry in the Guinness Book of Records . With a diameter of around 5.5 meters, the hat is a 20-fold enlargement of a circular saw hat from the 1920s. The TV presenter Reinhold Beckmann , who comes from Twistringen, also came to the celebration . The hat can be seen today in the Museum of Straw Processing.

Entrance gate to the "Hünenburg"

The so-called Hünenburg is located in the district of Stöttinghausen . It is a prehistoric ring wall with a diameter of about 80 m. These are the remains of an early historical fortification from the 5th to 9th centuries. In 1932, an examination of the inside of the wall revealed that it had once housed several buildings. The local Heimatverein Scharrendorf-Stöttinghausen zur Hünenburg was founded in 2001 to reconstruct the Hünenburg and to acquire public funding for it. In 2005 the wooden entrance gate to the Hünenburg was reconstructed. The first building inside the facility followed in 2008. The conclusion in 2014 was the construction of a bakery. As a result, the ring wall was given an almost castle-like character. The local history association has taken on the care and maintenance of the facility.

On November 13, 1973, a Belgian starfighter crashed into a residential building in the Mörsen district. The pilot, a firefighter, the father, the mother and two girls of the family were killed. A boy in the family was able to escape from a hatch before the fire spread to the house. The misfortune left three young orphans.

The full-time mayor Jens Bley is also entitled to vote in the city council.

Jens Bley has been the full-time mayor of the city of Twistringen since June 2019 . As a non-party applicant, he prevailed against his competitor with 78.39% of the vote.

Previous mayors of the city:

Blazon : “The city's coat of arms shows a white Lower Saxony horse on a shield in the upper red field. In the lower yellow field there are three yellow gear wheels on a red crossbar - as a symbol of the industry. "

Description: The Twistringer coat of arms was designed in 1935/36 by Gustav Völker , a high school teacher and heraldist from Hanover. In the upper field it shows the white Lower Saxony horse on a red background . The lower field, consisting of a broad red bar on a golden background, shows the coat of arms of the Bishop of Münster . Three gears are incorporated in the red bar . The coat of arms shows that Twistringen was a welcome object of contention for counts and bishops for centuries . Most often the ownership of Twistringen changed between the Counts of Hoya and the Bishops of Munster. This multiple rule is reflected in the division into two fields: In the upper area the Lower Saxony horse of the province of Hanover can be seen, while the lower area shows the coat of arms of the diocese of Münster. Twistringen's independence is represented by the three cogwheels - as a symbol of what was then the largest industrial community in what was then the county of Hoya .

→ see also the list of architectural monuments in Twistringen

The Twistringen city archive in the town hall, Lindenstr. 14, is the administrative archive of the city of Twistringen. Files, cards , documents , bequests and old editions of the regional newspapers are available here.

Municipal archives in the Diepholz district

The Jewish cemetery in Twistringen is a cultural monument . It is one of eight well-preserved Jewish cemeteries in the Diepholz district. In the cemetery on the street Zur Poggenmühle there are 46 tombstones from the years 1839 to 1945 for the Jewish deceased.

In Twistringen there are companies that supply agriculture (e.g. Raiffeisen-Warengenossenschaft Niedersachsen eG , Best 3 Geflügelernahrung GmbH (the latter with 113 employees), Kraftfutter-Meyer GmbH , but also other sectors such as cosmetics 2016).

School at the market 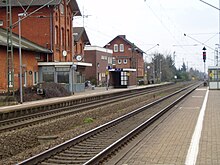 Rail The Twistringen station is on the Wanne-Eickel-Hamburg railway line . The connection to Bremen takes place every half hour ( RE  9 and regional S-Bahn RS 2, travel time 29 or 35 minutes); Osnabrück is connected every hour (RE 9, travel time 48 minutes).

Road The B 51 cuts through the urban area in a northeast-southwest direction and creates a connection to the north to Bremen and to the south to the district town of Diepholz and Osnabrück. The federal motorway 1 , which runs northeast at a distance of 18 kilometers , connects to Hamburg to the north and to Münster and the Ruhr area to the south .

Bus From Twistringen, bus routes 125 run via Barnstorf to Diepholz and 158 via Ehrenburg to Sulingen . There are also several school bus routes to the Twistringen school center.

Personalities who work on site

“Between Weserland and Hunte
Between mountains and the sea
Where in a wide, wide
circle of grain on fields as thick as ears,
Where fathers earthy
work with sons strength,
Where strangers found,
Gladly creates a home.

(Refrain :) Perle, you in Lower Saxony,
place of the most beautiful happiness,
Twistringen has grown
dear to my heart .

Work, trade, change, striving
mark us in our homeland.
Wives and daughters
decorate our lives with a dear hand,
happiness, cheerfulness and joy,
strong courage and ability , willing to
help in all suffering,
we are happy to vouch for that .

Once I was in a foreign land, I
slipped away from here as easily as a youth
,
The bonds should not tear, Those who made my homeland for me,
Blue stain under the distant sky, No matter
how much I would be liked,
I swear again and again:
Twisting my star of life.

Green skirts, green hats,
feather headdresses as colorful decorations
And a drink of old quality,
something a Sagittarius praises here.
On the price and king disk,
clear eyes and firm hand,
That it will still stay that way
Here in our fatherland.

During the Second World War , schnapps was illegally distilled on a large scale in Twistringen and also distributed in the surrounding areas. The schnapps distillery gave Twistringen the nickname Brenndorf in the vernacular . This name is partly still in use in the vicinity of Twistringen. In the 1960s Twistringen gained nationwide attention (even the picture reported) because three local pastors wanted to cordon off a cinema that wanted to show Bergmann's " Das Schweigen ".

Locations of the city of Twistringen