Goldenstedt is a municipality in the district of Vechta in Lower Saxony .

The community of Goldenstedt is located around 12 km south of Wildeshausen in the south of the Wildeshauser Geest Nature Park . It is bounded to the north by the Visbeker Bauerschaft Bonrechtern , the Wildeshauser Bauerschaft Hanstedt and the Denghauser Mühlbach , to the east by the Hunte , to the south by the Goldenstedter Moor nature reserve and to the west by the Vechtaer Moorbach and the Herrenholz forest area . The Goldenstedter Mühlenbach runs from west to east within Goldenstedt and crosses the eastern core before it flows into the Hunte. The upper course of the stream is designated as a landscape protection area.

Temperate maritime climate influenced by humid northwest winds from the North Sea. On a long-term average, the air temperature in Goldenstedt reaches 8.5 ° - 9.0 ° C and around 700 mm of precipitation falls. Between May and August, an average of 20 to 25 summer days (climatological term for days on which the maximum temperature exceeds 25 ° C) can be expected.

Barrows in the forest near one

The hoard find of Goldenstedt points to Bronze Age settlement . Prehistoric barrows can be found in one and Lahr . They were probably created in the 6th century BC. 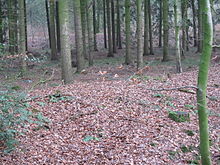 Outer (front) and inner (back) ring wall of the Arkeburg, taken before the reconstruction work

In the early Middle Ages, the Arkeburg was built in what is now the peasantry of the same name. There are no written documents about the castle from the Middle Ages. In 2017, a partial reconstruction of the castle complex with information boards was made accessible to the public.

The community was first mentioned in a document in 1080. According to a legend told by Carl Heinrich Nieberding , the name of the place as well as that of the "Golden Bridge" over the Hunte near Goldenstedt can be traced back to an event in 1011. The village of Lutten , which was incorporated against the will of the population as part of the Lower Saxony municipal reform in 1974 , is already mentioned in 872.

Goldenstedt became known through the Simultaneum mixtum . It was created in the period from 1650 to 1850. During this time the place was on the border of two domains with different denominations: the Catholic Niederstift Münster and the Protestant areas of Braunschweig-Lüneburg and Hanover . The dual power ended in 1817 , and in 1850, after the construction of the Evangelical Martin Luther Church in Goldenstedt, the Simultaneum mixtum as well. The writer Bernd Kessens wrote the sensational novel "... and a golden watch on my feet" on this subject .

When the National Socialists wanted to convert the denominational elementary schools into community schools in 1938 , resistance formed in Goldenstedt. Numerous Catholic and Protestant Christians boycotted the NS celebration on the “ National Holiday of the German People ” (May 1st) and instead gathered at the farm in Herbrügge in the Osterende farmers' community, where a court cross was inaugurated. An appeal was posted the following day:

“Citizens of Goldenstedt, on May 1st a new struggle begins, the religious struggle. ... We want to be Christians and not neo-pagans. "

Parents refused to send their children to school and gathered in front of St. Gorgonius Church . Thereon were Gestapo -Beamte and a train police from Wilhelmshaven according Goldenstedt sent. 14 men were arrested, twelve of them in the concentration camps Oranienburg and Buchenwald admitted.

The council of the community Goldenstedt consists of 24 councilors. This is the specified number for a municipality with a population between 9,001 and 10,000. The 24 council members are elected by local elections for five years each. The current term of office began on November 1, 2016 and ends on October 31, 2021.

The full-time mayor Willibald Meyer of the CDU is also entitled to vote in the local council.

The full-time mayor of the community of Goldenstedt has been Alfred Kuhlmann (independent) since November 1, 2019. Before that, Willibald Meyer (CDU) was elected mayor on September 11, 2011 with 74.5% of the vote. The turnout at that time was 58%. Meyer was honorary mayor from 1986 to 2005 and the municipality's first full-time mayor from 2005 to 2011. He was thus the longest serving mayor in Lower Saxony.

Description : In gold, a blue ax with the edge pointing to the right , accompanied by 6 red balls .

Symbolism: The coat of arms of the municipality of Goldenstedt shows a wooden ax with 6 coins. The ax indicates an ancient wooden dish . The coins on the right and left of the ax point to a legend that explains the name "Goldenstedt". Afterwards, the count's subjects from neighboring Diepholz received him with his young wife, daughter of a Swedish king, on the border of the parish, where the bridge over the Hunte still leads today. The newlyweds threw a lot of gold coins among the people here. Since then, the bridge has been called the "Golden Bridge" and the golden site has been called "Goldenstedt".

Since 1987 there have been contacts with the two French municipalities Bosc-le-Hard and Clères in Normandy , which led to an official municipal partnership in May 1989. The document was signed on May 7, 1989 in Goldenstedt and during a return visit on September 24, 1990 in France .

The Roman Catholic parish church of St. Gorgonius in the center of the community was built in 1908–1910 as a hall church in neo-Gothic style based on designs by the Bremen architect Heinrich Flügel . It is 60 m long and 30 m wide.

The Arkeburg in the Goldenstedter peasantry of the same name is the largest early medieval ring castle in northwest Germany . The complex, equipped with a double ring wall , probably dates from the second half of the 8th century. It has been expanding into a tourist attraction since 2017.

Bredemeyers Hof , an industrial monument located directly on the main road from Vechta to Twistringen , has also been upgraded for tourism .

The East German home and costume parlors are located in Ambergen.

In May 2014 the sandstone sculpture “Three Generations” and the wooden sculpture “Mother Earth” by Uwe Oswald were inaugurated on the occasion of the opening of the multi-generation park.

These and other sculptures in the center of Goldenstedt are stops on the "Goldenstedt Sculpture Mile".

On the outskirts of Goldenstedt, the steel sculpture "Goldregen" by the blacksmith Alfred Bullermann from Friesoythe has spanned the Hunte south of the "Golden Bridge" since 2013 .

A path with seven individual wooden figures and a triptych by Uwe Oswald has been included in the layout of the “Haus im Moor”, also on the outskirts of Goldenstedt .

The wind orchestra was founded in 1928 in Ellenstedt, a district of the Goldenstedt community. The orchestra performs around 35–40 assignments on various occasions each year. The repertoire ranges from classical marching music to folk music to medleys from well-known musicals. The board of directors and the conductor of the association expect its members to be trained at a local music school. The further training and the subsequent integration of young people into the orchestra is a main concern of the association.

View of an area of ​​the Goldenstedter Moors , the northernmost part of the Great Moors

On the edge of the Goldenstedter Moor nature reserve is the nationally known nature conservation information center with the house in the moor, or NIZ for short. A garden is attached to the NIZ in which regionally important fruit varieties that are threatened with extinction are grown. Between the NIZ in Goldenstedt and the “ Barnstorfer Umwelt-Erlebnis-Zentrum (BUEZ)” the little train Jan Spieker runs regularly in the warm season , and a light train for tourists into the moor.

Large parts of the municipality of Goldenstedt belong to the Wildeshauser Geest Nature Park, including the Herrenholz and the Goldenstedter Mühlenbach nature reserve, which extends from its source to the western edge of the town center. To the east of it, the Bachaue separates the multi-generation park in the north from Bredemeyers Hof in the south. A hiking trail to the Hunte and the Hartensbergsee recreation area runs along the Goldenstedter Mühlenbach through the multi-generation park .

The moor marathon has been held annually since 2003 .

The economic structure in Goldenstedt is characterized by small and medium-sized companies from the wood (including window construction, sawmills, catering facilities), mechanical engineering and metal processing industry (including conveyor and system technology, stainless steel processing, agricultural machinery and vehicle construction), as well as numerous craft businesses. The formerly dominant agricultural economy has differentiated itself into some highly specialized segments due to an increasing concentration process. It continues to represent a significant part of Goldenstedt's economic power, but due to the falling number of companies and the falling number of employees, it is not an industry of the future in the municipality of Goldenstedt.

Goldenstedt is located directly on the Delmenhorst – Hesepe railway line . There are train stations in Goldenstedt and Lutten, which are served every hour by the NordWestBahn trains (RB 58 Osnabrück - Bremen).

The passage through Goldenstedt has been closed to heavy traffic since August 2006. The Lutten through-road (Kreisstraße 254), on the other hand, is heavily burdened by truck traffic, which is why the population is now seeking a citizens' initiative to ban the passage. Delivery traffic is excluded.

The state road 881, which runs in a west-east direction, connects Goldenstedt with Lutten, coming from Twistringen (Diepholz district) and, before the Vechta northern bypass branches off, continues to Vechta city center.

There is a wind farm in Ellenstedt. A wind turbine with a hub height of 70 meters overturned there in 2002.

Municipalities in the district of Vechta

Districts and farmers of the community of Goldenstedt