The following important information is missing from this article or section:
Theories on the causes of voter turnout are lacking.
Help Wikipedia by researching and pasting it . 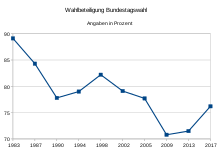 Participation in the German federal elections

The voter turnout reflects the proportion of eligible voters who actually voted in an election . Depending on the respective regional authority , those who have inserted an empty ballot paper or an invalid one are also counted among the voters. In public the term is mostly used in connection with political elections, but it can also be used in relation to other elections. In political elections, it is a form of political participation .

The turnout is usually defined as the ratio of participating voters to the total number of all eligible voters:

With this definition it should be taken into account that in some countries registration is required in order to be included in the electoral roll. In 2004, for example, the share of registered voters in the USA was 79% of those of voting age. The turnout based on all people of voting age was therefore only 55.27%.

At the federal, state, district and local levels, voter turnout has declined since its peak in the 1970s. The reasons for this downward trend, commonly known as electoral fatigue , are controversial. The normalization hypothesis refers to the historically and internationally unusually high voter turnout in Germany in the 50s and 60s and interprets the decline as normalization. Some political scientists and sociologists attribute this to the falling trust in party democracy due to broken election promises . In addition, the political differences between the parties are becoming more and more difficult to recognize (“ political disaffection ”). There is also the theory that falling voter turnout is a generational effect; In other words, a small number of the new cohorts entering the voting age would vote.

In order to illustrate the extent of this phenomenon, the image of a “party of non-voters” is sometimes used: If all non-voters had voted for another, fictitious party, this would be the strongest parliamentary group in some elections. The high number of non-voters and the increasing number of invalid votes result in a great potential for votes.

Overall, voter turnout in Germany is at a higher level than in other countries (see Japan, USA) - despite the rather large drop in participation in the 2009 Bundestag election compared to the 2005 election.

Overall, there is a decrease in the number of voters both among the entire population (1980: 88.6 percent - 2002: 79.1 percent) and among young people (up to 25) (1980: 79.65 percent - 2002: 69.15 percent) to observe. Since the up to 25-year-olds make up only eight percent of the electorate, they cannot be the only group responsible for the decrease in voter turnout. The difference between 1980 and 2002, i.e. the decrease in the proportion of voters, is somewhat greater among young people (10.5 percentage points) than among the population as a whole (eight percent). Broken down by gender, it can be seen that young and older women are always less likely to vote than men of the same age. As in the city, in rural areas there is a gap between the turnout of the general population (6%) and a lower level of trust in representative party democracy.

In the unfree elections to the Reichstag during the time of National Socialism and the People's Chamber in the GDR , significantly higher voter turnouts were officially shown than would have been possible with free elections. The turnout was portrayed in the respective propaganda as an expression of popular support for the regime.

Participation in the Reichstag elections under National Socialism, in which only one party ( NSDAP ) was allowed:

Participation in the Volkskammer elections of the GDR (examples, since the order of magnitude did not change):

Participation in the National Council elections of the first republic from 1919:

Participation in the National Council elections of the second republic from 1945:

Note: The particularly high voter turnout from 1945 to 1986 can be explained by the fact that (in some of the federal states ) voting was compulsory in Austria until the beginning of the 1990s .

The number of options for voting, the “ ballot box ”, is unique in Switzerland in the world - all government, cantonal and communal elections and referenda on constitutions, laws, financial proposals, popular initiatives, referendums, etc. combined.

In the “semi- direct democratic ” political system of Switzerland , those entitled to vote and to vote (the sovereign , the people , at the federal level not only men → women's suffrage in Switzerland ) are not only entitled to vote for their representatives ( municipality -, cantons - , National and Council of States , as well as the executive ), but also to exert direct influence on government and legislative activities through voting . There are four annual voting dates for this purpose. There are also elections for one of these “ ballots ” (in the usual rhythm of the legislature).

In Switzerland, voter participation is calculated by dividing the number of ballots or ballot papers submitted and inserted by the number of those entitled to vote. Votes or votes that have been made invalid are included in the voting / voter turnout.

In Switzerland, around 45 percent of those entitled to vote take part in votes and elections on average over many years, which in itself would be low in an international comparison. However, such comparisons do not take into account the fact that in a legislative period of (usually) four years there are sixteen voting dates, plus several voting topics ( proposals ). So it happens that political participation in Switzerland is massively underestimated in such comparisons.

More thorough, more in-depth political studies show a different picture - three quarters of all voters “more or less” regularly “go to the ballot box ”, as a study by the University of Zurich and the Center for Democracy Aarau showed that the data from the cantons of Geneva and St. Gallen evaluated. In the city of St. Gallen over a period of around half a legislative period (seven voting dates). The evaluation shows that during this period, 75% of those eligible to vote took part in at least one of the seven “ ballots ” (with several submissions) that the study recorded. Furthermore, around 25% of those eligible to vote take part in all elections and votes, 20% in none, and 55% irregularly.

The voter turnout in Switzerland is - in those studies that consider it by isolated ballot / ballot - considered to be the "lowest in a democratic country". The reasons for this are generally seen in their political system . The principle of concordance means that sudden, major changes of power - as was common in the early days of Swiss democracy - are ruled out. As a result, the elections, compared to other countries - where elections are the focus of political participation - lose their "explosiveness".

Political participation in Switzerland is "massively higher" - around 75% to 80%. The decisive factor here is the high “density” of political participation, which in Switzerland mainly takes place in votes (see also voting and voter participation above ). Those entitled to vote are “called” every third month to take part in referendums at communal, cantonal and federal level. The elections, also at the communal, cantonal and federal level, take place in addition to one of the voting dates, in the rhythm of the respective legislative period that is usual elsewhere (usually four years).

Participation in the National Council elections

The following table shows the turnout in National Council elections since the introduction of proportional representation :

The Principality of Liechtenstein is constitutionally defined as a “constitutional hereditary monarchy on a democratic-parliamentary basis” - with two sovereigns . The people on the one hand and the sovereign on the other. The people themselves can intervene in political events both directly and indirectly democratically. The state elections , in which 25 representatives are chosen, usually take place every 4 years.

Traditionally, voter turnout in the principality is very high. While it was over 90% in each case until the 1980s, it fell to around 85% by the state elections in 2009 .

The turnout in presidential and parliamentary elections in the USA is significantly lower than the European average. In the presidential elections, voter turnout fluctuated between 49% and 65% after 1900.

In France , it is customary not to indicate participation in the vote , but rather abstentions , i.e. the relative number of abstentions or non-voters , based on all (registered) voters.

In Spain elections always include the invalid ( esp . : nulos) and the empty ones (esp .: votos en blanco) , which are also invalid. As in Germany and Switzerland, they count among the electoral participants with the valid ones.

In various other countries, such as Belgium or Australia, voting is compulsory instead of the right to vote . Citizens who do not vote are then usually threatened with a fine , which means that voter turnout is high.

In Switzerland this affects the canton of Schaffhausen . A fine of six Swiss francs is levied.