Angelus Silesius ( Latin for Schlesischer Bote / Engel , actually Johannes Scheffler ; born and baptized December 25, 1624 in Breslau ; †  July 9, 1677 ibid) was a German poet , theologian and doctor. His deeply religious epigrams , close to mysticism , are counted among the most important lyrical works of baroque literature. 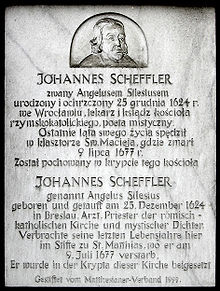 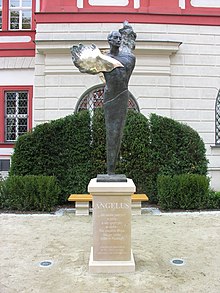 Johannes Scheffler was born and baptized on December 25, 1624. His father was Stanislaus Scheffler, a Polish nobleman who had to move from Krakow to Wroclaw because of his evangelical faith. Stanislaus Scheffler died in 1639, his much younger wife Maria Magdalena Hennemann two years later. The son attended St. Elisabeth High School in Breslau from 1639 to 1643 . Encouraged by his rector Elias Major (1587–1669) and his friend Andreas Scultetus , Scheffler began to write his first occasional Latin poems and to have them printed. He dedicated it to his rhetoric and poetics teacher Christoph Köler , friend and biographer of Martin Opitz .

Scheffler began studying medicine and constitutional law in Strasbourg in 1643 , then went to Leiden (1644–1647) and finally to the University of Padua (1647), where he received his doctorate in philosophy and medicine in 1648. In Leiden he came into contact with the mystic and theosophist Abraham von Franckenberg . This introduced Scheffler to the works of Jakob Boehme , which Silesius later described as the reason that he had come to the knowledge of the truth and confessed to the Catholic Church .

1649 joined Scheffler in Oels as personal physician to work for the strict Lutheran Duke Silvius Nimrod Württemberg-to Oels . When Franckenberg returned to Silesia in 1650 and lived near Oels, the old friends met many times. After Franckenberg's death in 1652, Scheffler wrote for him the memory of honor , his first poem, which is typical of his later work. In the same year he gave up his post as personal physician because of Franckenberg's death and a dispute with the court preacher Christoph Freytag in Oels, who refused him permission to print a small anthology with texts by older mystics. He settled in Breslau as a doctor.

Johannes Scheffler publicly confessed to the Roman Catholic Church on June 12, 1653 in the Church of St. Matthias in Breslau and took the name Angelus, a homage to the Spanish mystic Juan de los Ángeles (1536-1609, also Latinized as Johannes ab Angelis) or Johannes de Angelis ). He later added the name of origin "Silesius" (the Silesian) to avoid confusion. His change of denomination had caused a sensation and aroused harsh criticism from the Protestant side. So he felt compelled to publish a kind of justification in 1653, the Thorough Reasons and Motives why he resigned from Lutheranism and confessed to the Catholic Church .

In this writing he mentions as a motive for his conversion the reckless rejection of mysticism ( Theologiae mysticae ), which is the highest wisdom of Christians . He saw the idolatry of reason in the prevailing dogmatic Protestantism . The Catholic Church, which not only communicates with the saints in prayer, but also enjoys personal appearances and visits , is the body of the Holy Spirit.

After his conversion he consistently placed himself in the service of the Counter-Reformation of Silesia, which he supported with a total of 55 very sharply and polemically worded pamphlets against the Protestants. Even his first major polemic ( Türkenschrift , 1663) brought him an indictment of disturbing the peace. He called Martin Luther a Lucifer , who instead of heavenly light brought only hellish darkness ; He interpreted the Turkish threat as a threat to the Christian West as a divine punishment for the Lutheran heresy . The printing of his pamphlets was financed by Abbot Bernhard Rosa of the Cistercian Abbey of Grüssau . Some of his songs, according to me, speaks Christ, our hero or Auf, Christenmensch, auf, auf den warfare, were sometimes misunderstood in the 19th century as battle cries, which should encourage Catholics and especially the Catholic princes to fight against the Protestants. The texts, which use biblical metaphors to call for a fight against the devil, flesh and sin , as well as their broad reception in Protestant hymn books, however, refute this interpretation.

From 1654 Angelus Silesius held the honorary post of court doctor to Emperor Ferdinand III. and became a member of the Rosary Society . In 1661 Angelus Silesius was ordained a priest for the diocese of Breslau in Neisse . He was known to take part in spectacular processions while drinking ecstatically . The Jesuit Daniel Schwartz wrote in his funeral speech on Angelus Silesius that he had appeared on his first pilgrimage not as a private cleric and minor priest , but as a

Angel and God-Both, fearless and insurmountable, with a burning torch in the left hand, with a crucifix in the right, with a thorny cron on the head, with a seraphic eyfer and resolution in the heart.

From 1664 to 1666 Angelus Silesius was court marshal of the Breslau prince-bishop Sebastian von Rostock . After that he lived in seclusion until his death as a doctor for the poor and the sick in the Matthiasstift in Breslau . He gradually gave away all his fortune to the poor, provided for the education of orphans and, as a doctor, treated destitute patients free of charge.

From 1666 on, Angelus Silesius, after retiring to St. Matthias Abbey, set about writing numerous polemical-theological writings, which were printed in 1677 under his real name as Ecclesiologia . Angelus Silesius died after a long illness, which he had made worse by a strictly ascetic life, and was buried in the Matthias Church in Breslau .

The reference to the cherubim in the title of the collection of poems refers to the traditional hierarchy of angels and indicates that the attempt to describe the mystical path to God is being undertaken here in an intellectual, mind-pleasing manner. This corresponds to the pointed form of the Alexandrian epigram, which supports an antithetical representation and apparently paradoxical statements and assertions with which the unspeakable is to be put into words.

In Breslau, the Holy Souls Pleasure or Spiritual Shepherd Songs appeared (second edition, increased by a fifth book, 1668). Most of the melodies for the songs were written by the Wroclaw musician Georg Joseph . About 50 of the spiritual shepherds' songs were included in the Hallesches hymnal, including I want to love you, my strength.

In contrast to the first collection, the texts in this collection tend towards experiential poetry. The intensity of the religious concern enables the ego to make direct statements. The form of the text from pair of rhyming quatrains to the most elaborate stanzas varies the basic idea of ​​the soul's love for its Savior . Angelus Silesius takes up the Song of Songs , in which the allegorical interpretation of love between soul, the bride, and Christ, the bridegroom, is described up to the mystical union. Shapes and motifs of shepherd poetry are imitated and used for spiritual purposes.

God is nothing but good: damnation, death and pain,
and what is called bad, human, only has to be in you.

The light of glory shines in the middle of the night.
Who can see it? A heart that has eyes and watches.

God lives in a light to which the path breaks.
Who does not become one himself does not see him forever.

Stop, where are you going, heaven is within you:
if you search for God elsewhere, you are missing him for and for.

I am as big as God, he is as small as me.
He cannot be over me, I cannot be under him.

You are not in the place, the place is in you!
If you throw it out, eternity is already here.

There is no thing here
that is more beautiful than I am,
because God, beauty itself,
has fallen in love with me.

In Martin Scorsese's remake movie Cape of Fear , the criminal Max Cady (played by Robert De Niro ) corrupts a verse by Angelus Silesius: “I am like God and God is like me. I am as big as God and God is as small as me. He cannot stand above me, I cannot stand below him! "

In his poem “Der Spruch”, the expressionist poet Ernst Stadler refers to Angelus Silesius' verse: “Human beings become essential; because when the world passes, chance disappears, the essence that exists. "

Konstantin Wecker published 2015 Without Why with Without Why (sunder warumbe) , the title song of the album, a song, to which he was inspired by an epigram Silesius' in which a rose is described, which blooms for its own sake, without following a sense of asking.

Streets in Freiburg , Ingolstadt , Cologne and Landsberg are named after Angelus Silesius .

1675 expanded as a cherubin wanderer or spirit-rich sense and end rhymes. Schubarth, Glatz ( digitized and full text in the German text archive )