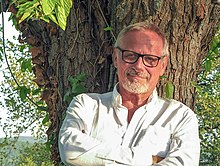 Konstantin Wecker at the Zelt-Musik-Festival (ZMF) 2017 in Freiburg

Konstantin Alexander Wecker (born June 1, 1947 in Munich ) is a German musician , songwriter , composer , actor and author . He is considered one of the most important German songwriters.

From 1968 he made a name for himself in the cabaret scene, co-founded the rock-soul band Zauberberg and went on tour with the German version of Jesus Christ Superstar . He became known as a pianist and singer , but was also convincing as a composer of film scores (e.g. Schtonk! ) And musicals as well as an author ( poetry and prose ). His songs, sometimes melancholy, but often accusatory, sometimes influenced by the blues , mainly reach a left-wing audience. As an actor, he worked in the nurses report and six other sex films from 1972 to 1974 .

In 1974 he founded the Musikon team , with whom he produced his own records and concerts until 1985. In 1980 he moved to Tuscany with the musicians and friends . In 1977 he made his breakthrough with the album Enough is not enough . Wecker was awarded the German Cabaret Prize for this in the same year . The ballad on this LP to a friend Willy who was slain by right-wing extremists became a cult. In an interview with the Allgemeine Zeitung (Rhein Main Presse) on March 24, 2015, he stated that the real Willy was still alive and partly sold CDs at his concerts. It is his friend and co-author of his biography Günter Bauch. In 1979 Wecker composed and played the music for the album Hagenbuch has now admitted by cabaret artist Hanns Dieter Hüsch . In 1980 he married the actress Carline Seiser , from whom he divorced in 1988. After his first success as a songwriter, Konstantin Wecker began to use cocaine . A literary treatment of this topic can be found for the first time in the heretic letters of an addict (1983).

He worked with many well-known German and foreign artists, including Joan Baez and Mercedes Sosa . Between 1986 and 1993 he gathered a band, some from the German jazz scene, around the United Jazz and Rock Ensemble . Among them were u. a. Wolfgang Dauner , Charlie Mariano , Johannes Faber , Frank Diez , Stephan Diez , Norbert Meyer , Wolfgang Haffner and Jo Barnikel , but also the English musicians Colin Hodgkinson and Pete York . On June 13, 1987 Wecker took part in the press festival of the SED central organ New Germany in East Berlin in front of around 10,000 East German listeners.

In the mid-1990s, Wecker's drug addiction escalated - according to his own statements, from 1994 until his arrest on November 29, 1995, he consumed up to 7 grams of freebase / cocaine base and cocaine and suffered from delusions . Already in his 1993 novel Uferlos with recognizable autobiographical features, he made the subject of drugs a clear theme . The following court hearings dragged on for years. In April 2000, he was sentenced to one year and eight months suspended prison sentence in the third instance. His lecture on drug addiction, given to neurologists in Erlangen in 1997, was published two years later under the title There is no life without death in book form.

On February 3, 1996, Wecker married Annik Berlin from Bassum near Bremen, 27 years his junior , whom he had met at one of his concerts. In 1997 and 1999 the sons Valentin and Tamino were born.

From the year 2000, Wecker appeared together with Hannes Wader . On the occasion of Wader’s sixtieth birthday in 2002 there was a concert by Konstantin Wecker, Hannes Wader and Reinhard Mey in Bielefeld, in which Jo Barnikel also took part as a pianist. It was released in 2003 on CD under Mey, Wader, Wecker - das Konzert . In 2010 a German tour with Hannes Wader, Jo Barnikel, Nils Tuxen and Hakim Ludin took place under the title “No end in sight” .

With Christopher Franke he composed the musical Ludwig² , which premiered on March 11, 2005 in Füssen , and before that the Hundertwasser musical (2004). In recent years he has appeared increasingly as a soloist or with Jo Barnikel as an accompanist.

In the festival season 2006 and 2007 Konstantin Wecker was musical director for the theater performances Faust I and Faust II at the Bad Hersfeld Festival . He composed the musical accompaniment for these pieces and gave a concert at the beginning of rehearsals in the monastery ruins .

In the 2007/2008 winter semester, Wecker accepted an official teaching position at the Julius Maximilians University of Würzburg ; In 2007, 2013 and 2018 he taught composition and arrangement in the songwriting workshop .

In February 2010 he was appointed to the Munich tower scribe.

Konstantin Wecker 2015 at the Tollwood concert

On June 26, 2013 Konstantin and Annik Wecker announced their mutual separation. They later became a couple again, but kept this out of the public eye.

In 2013 Wecker, Dieter Hildebrandt and Georg Schramm founded the stoersender.tv format . In the same year Wecker founded the independent record label " Sturm & Klang " based in Munich .

In November 2013, Wecker and the Austrian opera singer Angelika Kirchschlager undertook the Liedestoll tour through Germany and Austria, during which his songs from Schubert to Schumann were performed. In 2013 he sponsored the third season of a street musician casting show. NRW's most popular street musicians were searched for as part of the WDR program daheim + on the go . The prize winners Simone Oberstein and Thomas Schlüter won the competition and thus an appearance at a concert by Konstantin Wecker.

Wecker has been visiting professor at the University of Koblenz-Landau (Campus Landau) since June 13, 2018.

Konstantin Wecker was also politically active over the years of his artistic career. In 1982 he took part in the concert series Artists for Peace . In many of his songs, Wecker deals with daily political events. His well-known ballad Willy deals with the confrontation of the 1968 movement with right-wing ideas.

In January 2003, two months before the start of the Second Iraq War , Wecker went with a group of Western artists to the country ruled by the dictator Saddam Hussein to perform in Baghdad at a solidarity concert that was politically instrumentalized by the Iraqi regime. Wecker explained: “That is a price that you have to pay. I don't know what the Iraqi press is doing with our visit from a journalistic point of view, I don't care either. The central newspaper is unofficially called the 'disinformation sheet'. Everyone knows that too and knows how to read between the lines. And what can the Iraqi government do with it if it wants to capture Konstantin Wecker? ”After his visit to Iraq, he founded the web magazine Behind the Headlines , which is directed against racism, militarism, authoritarianism and dogmatism.

Konstantin Wecker appears at rallies of the peace movement . With the motto Nazis out of this city , Wecker toured together with the songwriters Strom & Wasser in 2006 through East Germany . The cancellation of the concerts in Hoyerswerda and Halberstadt attracted attention and discussions . According to press reports, the concert in a grammar school in Halberstadt in Saxony-Anhalt was not approved due to pressure from NPD politicians and the announcement of disruptive actions. District Administrator Henning Rühe explained that they did not want to risk the NPD claiming the right to be able to hold events in the school as well. The NPD justified the action with the danger of an election campaign for the Left Party.PDS in the run-up to the state elections.

On June 17, 2006 there was finally an open-air concert in Halberstadt (Düsterngraben). There were also Hannes Wader, Hans-Eckardt Wenzel , Strom & Wasser ( Heinz Ratz ) and the Afghan percussionist Hakim Ludin .

As a result, the confrontation came at the request of the Greens - fraction to a debate in the Bundestag on the right-wing extremism in Germany. Wecker canceled the concert in Hoyerswerda due to a dispute over the motto of the performance. The proposed theme of the organizer Nazis out from the minds displeased alarm clock that when Nazis get out of this town wanted to stay. Konstantin Wecker is occasionally also a guest at the UZ press festival . On June 16, 2007 he appeared at the party congress of the party Die Linke . In 2007 he took part in the initiative Rheinhessen against right.

In 2010, in an interview with the magazine Graswurzelrevolution , Konstantin Wecker confessed to the rule-free society: "I always felt that I belonged to the anarcho-camp, even in the 68s, because as a young man I was deeply impressed by Henry Miller ." He continues: "We have to hold on to our utopias of a society free of domination and violence, and develop them further together with others."

Despite continued political involvement, Wecker was never a member of any party. In a double interview with Hannes Wader in the Sunday edition of the Frankfurter Allgemeine Zeitung on August 8, 2010, Konstantin Wecker confesses that a party can never be a home for him. “I've always been of the opinion that the artist's chance lies in being able to paint in bright colors, in contrast to the black and white of politics. For me, party membership would have always been a restriction. "

In the run-up to the Bavarian state election in 2013 , Wecker advocated a change of government in favor of the SPD .

In 2015, he supported a declaration calling for the Association of Those Persecuted by the Nazi Regime - Association of Antifascists of Bavaria to be deleted from the Free State's report on the protection of the constitution . He also supports the Coordination against Bayer Risks (CBG). 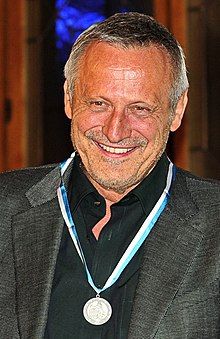 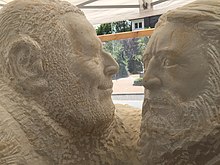 Alarm clock with the artist Gautam , sculpture in front of the town hall in Kirchhundem in the Sauerland

Concert and reading in Vienna, 2009 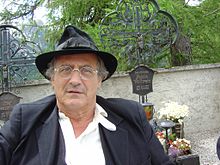 The documentary Wader Wecker Vater Land by Rudi Gaul about Hannes Wader and Konstantin Wecker, who went on tour together in 2010, won the Audience Award as the most popular film at the Munich Film Festival in 2011.