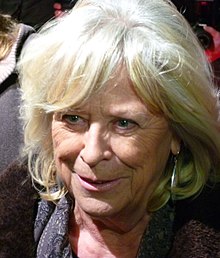 As a stateless person, Margarethe von Trotta spent her childhood and youth with her mother Elisabeth von Trotta , descendant of a German-Baltic noble family, in Düsseldorf . Her father is the painter and illustrator Alfred Roloff . After passing secondary school , she attended high commercial school for two years and then worked in an office. She gained her first film experience in the late 1950s when she was in Paris . She made up her Abitur in 1960 at the Theodor-Fliedner-Gymnasium in Düsseldorf-Kaiserswerth and then began to study art in Düsseldorf. She moved to Munich to study German and Romance languages . She also broke off this course in order to take lessons at an acting school. In 1964 she had her first major appearance in Dinkelsbühl . Through her marriage to the publishing editor Jürgen Moeller, she received German citizenship in 1964. Their son Felix comes from this marriage. The marriage ended in divorce in 1969.

After appearances in Stuttgart , she played at the Kleiner Theater am Zoo in Frankfurt am Main in 1969/1970 . During this time she also took on roles in four films by Rainer Werner Fassbinder . In 1971 she married the director Volker Schlöndorff (divorced in 1991).

She has directed it herself since 1977. After separating from Volker Schlöndorff, Margarethe von Trotta first lived in Italy and now in Paris and Munich.

In 1978, together with Alice Schwarzer , Erika Pluhar , Inge Meysel and four other women, she sued unsuccessfully against what they believed to be sexist covers in the tabloid Stern magazine . While this trial was lost, it is considered a popular start in the fight against pornography and misogyny .

With her film Die Bleierne Zeit "for the first time a woman's film attracted international attention" by winning the Golden Lion at the Venice Film Festival in 1981 .

In the winter semester 2013/14 Margarethe von Trotta took over the Mercator professorship at the University of Duisburg-Essen .

At the German Film Prize 2019, the director received the honorary award for her "outstanding services to German film" for her life's work.