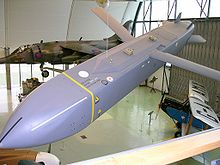 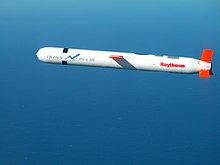 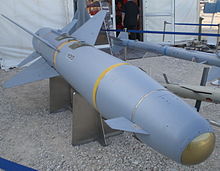 A cruise missile ( English cruise missile , eingedeutscht: Cruise Missile ) is an unmanned military missile with a warhead , which itself controls to the finish.

It differs from a ballistic missile in that it is permanently propelled during the entire flight and in its aerodynamic flight, often supported by wings - in contrast to tactical and strategic surface-to-surface missiles .

The propulsion is generally carried out by a jet engine , as a turbofan or also as a ramjet , sometimes also by a rocket engine, as is often the case with fast anti-ship missiles .

The weapon can be launched from submarines , ships , airplanes or from land and, at a height of 15 to 100 meters, flies so low that it is difficult to detect by the enemy radar . Also for infrared - sensors , it is difficult to see because of their low heat emission.

Modern cruise missiles can be categorized according to their size, speed and range. 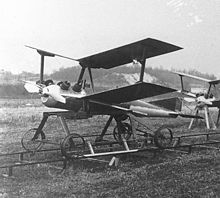 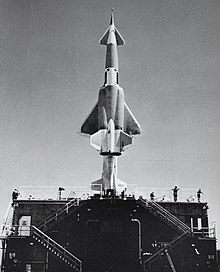 Already in the First World War there had been various attempts by the warring armies. From 1917 to 1920 the Kettering Bug was developed in the USA . An independently controlled unmanned aerial torpedo  - not to be confused with the German name Lufttorpedo  - this reached a range of over 100 km with a weight of around 250 kg. The missile was not ready for series production during the war and development was later abandoned.

In Porz- Westhoven near Cologne, the Mannesmann-MULAG developed around 1918 under the direction of Villehad Forssman on behalf of the Reichsmarinamt under the code name Fledermaus a wire- remote-controlled guided missile, which at the time was also known as an “air torpedo”. The tests took place on a military training area at Wahn und Spich . After moving from Siemens, Forssmann worked in Westhoven on the construction of the giant Riese von Poll aircraft , which, however, was never completed.

In the 1930s, various types of air-throwable torpedoes with the designation "LT F5b" were tested in Germany, which were also known as " air torpedoes ". In 1942, the Blohm & Voss company developed the L 10 "Friedensengel" , which was attached to the outer wing of the Ju 88A-4. 450 pieces of this further development of the F5b were produced. Later there was the successor type "L 11 - Snow White".

The forerunner of the modern cruise missile, the German “retaliatory weapon” V1 , which was used for attacks on London and Antwerp during World War II , then went in a completely different direction and dimension . In contrast to the modern cruise missiles, this one was only equipped with a simple autopilot . This could control the cruise missile according to compass course , flight time and altitude. The target accuracy achieved at a combat range of 250 km was 12 km. That may seem small, but is completely sufficient for an area target like London (40 km × 50 km).

In the 1950s, both the USA and the Soviet Union developed a number of long-range cruise missiles with intercontinental ranges (USA: SM-62 Snark and SM-64 Navaho ; Soviet Union: Lavochkin La-350 "Burja" ). The US Pluto project , which provided for a nuclear ramjet, was particularly technically ambitious . After the bombs were dropped at Mach  3, the missile should orbit over enemy territory for a further minutes or hours in order to radioactively contaminate other areas and destroy them with the supersonic pressure wave. The project was discontinued in 1964 after successful test runs, however, because the US government found it too provocative. All these projects were due to the introduction of ballistic intercontinental missile ended (ICBM).

In 1972 General Dynamics (now Raytheon Missile Systems) began developing the AGM / BGM / RGM / UGM-109 Tomahawk, the aim of which was to develop a cruise missile that could be used from ships, submarines, aircraft and vehicles could be. It should be used against strategic land targets as well as ships. The cruise missiles have been delivered to the US armed forces in Europe since 1983. Along with the Pershing 2, they were the subject of the controversial NATO double decision .

From 1982 onwards, the United States developed the AGM-129, a nuclear-armed cruise missile that, thanks to stealth technology , was difficult to detect even by Soviet flying radar systems. After the completion of 460 pieces, production was discontinued in 1993, as the original opponent had disbanded with the Soviet Union in 1991 .

A number of cruise missiles emerged in the Soviet Union during the 1980s as counterparts to the American Tomahawk and CALCM : the airborne Ch-55 , the submarine-based SS-N-21 Sampson and the vehicle-mounted SS-C-4 Slingshot . In the 1990s, the strategic cruise missile Ch-101 was developed in Russia .

Modern cruise missiles of the Tomahawk and CALCM types formed the first wave of US attacks in both the Second and Third Gulf Wars in order to neutralize the Iraqi air defense with a low risk for one's own troops. The system price for the sea-based BGM-109 Tomahawk cruise missiles used was between 600,000 and 1 million US dollars.

Together with Russia, India has developed the BrahMos missile, which with a takeoff weight of 3,000 kg and up to Mach 2.8 is the largest and fastest cruise missile (as of 2015). The first test took place in June 2001; production began in 2004. The BrahMos II missile, which is currently (June 2015) still under development, is supposed to reach hypersonic speeds at speeds of Mach 5 to 7 ; the first test flights were planned for 2017.

In Germany , work was already being carried out on the development of cruise missiles during the Cold War, which was done at the state-owned DFVLR, the predecessor of today's DLR . Companies such as MBB , Rheinmetall and Dornier were also involved in this work . Later developments took place together with Sweden and resulted in the Taurus cruise missile , which went into series production in 2005.

In August 2005, Pakistan successfully tested its Hatf VII Babur cruise missile with a range of 700 km, which can be armed with nuclear warheads .

South Korea developed its own cruise missiles and put the Hyonmu-3A (also known as Cheon Ryong) into service in 2006 with a range of up to 500 km.

In March 2013 and October 2014 India tested a newly developed long-range cruise missile with the name Nirbhay for the first time .

In March 2018, Russian President Vladimir Putin dedicated a third of his speech to the nation with the presentation of supposedly invincible nuclear weapons, including a nuclear-powered cruise missile ( Burewestnik ) with unlimited range.

Since October 2018, the USA, and since December all NATO countries, have accused Russia of developing a nuclear-armed cruise missile with the designation Novator 9M729 ( NATO code name SS-C-8 Screwdriver ) and thus of violating the INF Treaty . Russia denies the possible range.

With modern air-to-air missiles such as the AIM-120 AMRAAM , interceptors can fight cruise missiles. This is possible from the ground using several networked and radar-controlled anti - aircraft missiles and anti - aircraft cannons , for example a 35 mm Oerlikon twin cannon with AHEAD ammunition .