The Messerschmitt-Bolkow-Blohm GmbH (MBB) was one of the largest aerospace and defense contractors . Its best-known products include the Bo 105 and BK 117 helicopter types . Today's MBB SE is not a successor company to the "old" MBB, but got its name from the takeover of a former subsidiary (MBB Gelma Industrieelektronik GmbH).

Former headquarters of the management in Ottobrunn

Messerschmitt-Bölkow-Blohm GmbH was created in 1969 through the merger of Bölkow GmbH with Messerschmitt AG and the subsequent takeover of Hamburger Flugzeugbau GmbH , a subsidiary of Blohm + Voss .

After the takeover of Hamburger Flugzeugbau GmbH on May 14, 1969, the following investments were made:

In 1980, on behalf of the Federal Ministry for Research and Technology , MBB developed the Monopteros wind turbine , a single-wing aircraft.

In 1981 MBB took over the company Vereinigte Flugtechnische Werke , a successor to the companies Focke-Wulf , Focke-Achgelis and Weser-Flugzeugbau . As a result, the MBB Group expanded to include the following companies:

As a result, the following were involved in the MBB Group: Werner Blohm family 0.67%, Messerschmitt Foundation 6.75%, Ludwig Bölkow 1.57%, the Free State of Bavaria (direct) 7.02% and, through the Bavarian State Agency for Development Finance, 16.50% %, the Free and Hanseatic City of Hamburg via Hamburger Gesellschaft für Beteiligungsverwaltung mbH (HGV) 18.23%, Siemens AG 7.5%, August Thyssen Hütte AG 7.5% and Aérospatiale 10.69% via Fides Industrie- Beteiligungsgesellschaft, the Free Hanseatic City of Bremen 3.80% and Friedrich Krupp AG 6.20% via VFW-Verwaltungsgesellschaft as well as Allianz AG 6.78% and Robert Bosch GmbH 6.78% via ABM Beteiligungsgesellschaft.

After leaving the MBB board (December 1977), Ludwig Bölkow founded the Ludwig Bölkow Foundation in 1983, based in Ottobrunn. Since then, the aim of the foundation has been to promote sustainable energy and economic structures in all areas of society, with a focus on energy, agriculture and mobility.

In 1985 Bayerische Vereinsbank AG and Dresdner Bank AG each acquired a 5.0% stake in MBB through BD-Industrie-Beteiligungsgesellschaft .

With the establishment of the Energy and Industrial Technology division in 1985–1986 within the MBB Group, new technologies such as efficient energy and automation technology were brought into the focus of business activity. 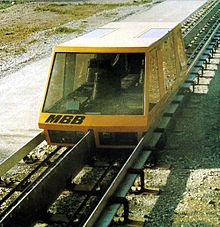 Magnetic train on the test track in Ottobrunn (1974)

MBB played a decisive role in the development of the Transrapid and the InterCityExperimental .

In August 1984, MBB confirmed that it had delivered two transport helicopters to members of the government during the First Gulf War in Iraq . 24 from the Construcciones SA Aeronáuticas built (CASA) in Spain under license helicopter equipped with Oerlikon - machine guns , have also been delivered to Iraq. On September 20, 1984, MBB department head Manfred Rotsch , who was also involved in the development of the Panavia Tornado multi-purpose fighter , was arrested for espionage for the Soviet intelligence service KGB .

In 1989 the Daimler-Benz subsidiary DASA took over MBB. At that time, MBB had around 40,000 employees and a turnover of 7.1 billion DM.

Messerschmitt-Bölkow-Blohm GmbH was fully integrated into DASA in 1992 and also merged with it under company law. In 2000, DASA was merged with the French Aérospatiale-Matra and the Spanish CASA to form the European aerospace group EADS - European Aeronautic Defense and Space Company (now Airbus Group ).

MBB, like DASA, were each the largest arms exporters in Germany .

Spin-offs and subsidiaries outside the aerospace industry

MBB Business Development GmbH (MBB-BD) was founded in 1996 from MBB's environmental technology division on the initiative of long-term Bölkow and MBB employees , to which DASA provided initial help . Around 40 active and retired employees took part in MBB-DB . The company's projects included wastewater treatment plants, biogas plants and solar parks . MBB was already building photovoltaic modules based on amorphous silicon in the 1980s . However, the project was unsuccessful and the newly founded company went bankrupt in December 1996. In October 1996, the environmental systems sub-division was separated from MBB-DB and became an independent company, MBB Business Development Umweltsysteme GmbH . Other successor companies such as MBB Projects GmbH , MBB Clean Energy AG or MBB Sun AG have now been dissolved.

Betriebsdatenerfassungs- , time and attendance - and access control systems were one of the main activities of the MBB business division cybernetics . At Bölkow GmbH in Ottobrunn, the first large-scale test with flexible working hours was carried out as early as the 1950s . In the 1970s, MBB tried to integrate time recording into the IT system . The "BESSY system" arose from this development. In 1977 the company Gelma (company for electro-mechanical devices) for the production of BESSY systems was acquired by MBB.

As early as 1954, Ludwig Bölkow was interested in glass fiber reinforced plastics (GRP) and the associated possibilities of new types of construction and manufacturing processes. In the following three decades, fiber composite materials were used in all areas at MBB (e.g. for rotor blades for wind turbines and helicopters , gliders and motorized aircraft , floor assemblies for vehicles , ceiling and side wall cladding for passenger coaches and railcars as well as for components for military and motor vehicles Airliners , helicopters , missiles and satellites ).

With all these activities, it was only a logical development that a fiber composite material (FVW) division was created at MBB over the course of time: The FVW project group of the former rotary wing and traffic division from Ottobrunn joined the joint venture MBB- after a short stop in Garching . Kunststofftechnik GmbH (MKT) based in Laupheim, which was founded in 1985 together with Freudenberg . Freudenberg held 24.9% and MBB 75.1% in the company. But the joint venture was terminated on December 31, 1986 . MBB took over all shares. The MBB Kunststofftechnik GmbH ceased to exist when it merged company law with the DASA 1995th

In 1933 Henrich Focke was ousted from Focke-Wulf - Albatros AG, which he co-founded . In 1937, he founded Focke, Achgelis und Co. GmbH in Ganderkesee (Hoykenkamp), which initially dealt with the development and later also with the manufacture of helicopters (for example Focke-Wulf Fw 61 and Focke-Achgelis Fa 223 ). After the war, caravans and conveyor and lifting systems were manufactured at this location. In 1944, Weser Flugzeugbau GmbH took over Focke-Achgelis. In 1961, the "Weserflug" finally merged with Focke-Wulf to form the United Flight Technical Works (VFW).

As a result of the merger of MBB with VFW, the two companies MBB Liftsystems AG and MBB Förder- und Hebesysteme GmbH emerged from the MBB special technology division at this location in the 1980s .

The MBB Lift Systems AG and its subsidiary operating in the military sector MBB handling and lifting systems GmbH in 1996 sold by DASA to a German investment group. A French investor joined the company in 2001 in connection with a capital increase. The MBB Lift Systems AG was founded in December 2007 by the Salzburg crane manufacturer Palfinger acquired, changed its name first among MBB Palfinger GmbH and today under the name Palfinger Tail Lifts GmbH . It primarily produces lifting systems for trucks and vans. The MBB handling and lifting systems GmbH (since 2004 FHS handling and lifting systems GmbH ) develops innovative special techniques. In the civil sector, wind power plants were developed and produced in the 80s and 90s (for example Monopteros , which managed with just one rotor blade). In the military sector, innovative special technologies (especially in lifting technology ) are developed for the air force, the navy and the army .

In the mid-90s, DASA and its chairman Jürgen Schrempp introduced the “Dolores” (Dollar Low Rescue) program - Daimler wanted to concentrate more on its core business. Over 16,000 DASA employees were laid off; Among other things, the development of wind turbines and production at MBB was discontinued.

Employees at Bölkow GmbH began to investigate the effectiveness of laser beams in 1968. A 25 watt Nd: YAG laser for material processing was created in 1971 . In cooperation with the dermatological department of the Biederstein Clinic in Schwabing, MBB received its first research contract from the Federal Ministry of Education and Research in 1971 . MBB developed the "mediLas" devices for surgical medicine in the 1970s. In 1975, bleeding, especially in haemophilic patients after tooth extractions , was brought to a standstill for the first time in the University of Munich Clinic . In 1977 the first bladder tumors were successfully destroyed endovesically. The MBB Medizintechnik GmbH was founded in 1978 as an independent subsidiary MBB. In 1987 more than 1,000 "mediLas" systems from MBB had been sold worldwide. In 1992, MBB-Medizintechnik GmbH was merged with the similar activities of Dornier Medizintechnik GmbH within DASA . The Dornier Medizintechnik GmbH was founded in 1996 Technologies to Singapore Pte. (today Accuron Medical Technology Group) sold and now operates under the name Dornier MedTech GmbH .

In MBB's Process and Nuclear Technology division, MBB dealt with micromechanics , radionuclide batteries and vacuum super insulation (VSI). In the early 1970s, MBB developed an automatic assembly machine that assembled parts with a precision of at least one thousandth. This machine was freely programmable in eight axes and represented a special feature among the assembly machines known in the world. Research and development of the radionuclide battery was stopped at MBB at the end of the 1970s because of the high costs and the safety risk. In the 1980s, several product lines emerged from vacuum super insulation (e.g. thermos flasks made of stainless steel and large containers as heat storage ).

The first production of airbag - gas generators in Germany took place in 1981 in works of Bayern-Chemie GmbH in Aschau am Inn and in Ottobrunn. By mid-May 1987, the MBB subsidiary Bayern-Chemie had already delivered over 200,000 airbag gas generators to the automotive industry. From 1985 Bayern-Chemie was also able to offer gas generators for belt tensioners . In June 1992, the entire area of ​​airbag gas generators and the associated business activities from Aschau and Ottobrunn were brought by DASA into the newly founded company TEMIC Bayern-Chemie Airbag GmbH - as a direct subsidiary of the Daimler-Benz group. On January 1, 1997, the American technology group TRW Inc. acquired the company. In May 2015, took ZF Friedrichshafen the area TRW Automotive TRW Inc. The ZF leads since then the production of airbag inflators in Aschau as an independent business unit "Active and Passive safety technology" continues.