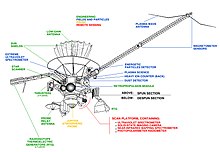 Diagram of the Galileo probe

Diagram with detailed labeling of the Galileo probe

Diagram of the daughter probe

The daughter probe throws off its heat shield (artist's impression)

The Galileo spacecraft was launched by NASA on October 18, 1989 to study Jupiter and its moons. The probe takes its name from the Italian inventor and scientist Galileo Galilei , who was the first to describe the Galilean moons of Jupiter .

Before this mission, the planet Jupiter had never been continuously observed by a space probe for a long time. Four space probes had flown past him before ( Pioneer 10 and 11 and Voyager 1 and 2 ), but they could only provide brief snapshots during their flyby . In contrast, Galileo orbited Jupiter permanently as an orbiter in order to observe both the planet itself and its moons .

Before the arrival, a daughter probe was decoupled, which penetrated Jupiter's atmosphere and provided various data on temperature , pressure , wind speed and chemical composition. The mother probe served as a relay station to send the information to earth .

According to initial plans from 1977, Galileo was to start in January 1981. Various delays in the original space shuttle launch vehicle , financing uncertainties and finally the Challenger disaster led to several years of delays and changes to the probe and flight path. Originally, Galileo was supposed to be brought into space in May 1986 on the canceled STS-61-G mission . But on October 18, 1989 the time had finally come. The space shuttle Atlantis brought Galileo into orbit on the STS-34 mission , where it was launched. In order to leave the earth orbit, the solid upper stage IUS was mounted on Galileo, which also served as a drive stage for heavy satellites and space probes in other space shuttle missions. Before starting her journey to Jupiter, Galileo performed three swing-by maneuvers to gain momentum through the orbital movement of the planets Venus and Earth. In February 1990, Galileo passed Venus 16,000 km away, at the beginning of December of the same year it passed the earth for the first time and two years later again. Meanwhile, she was able to send spectacular images from both Venus and Earth to the ground station.

On the way to Jupiter, Galileo passed the asteroid Gaspra in 1991 at a distance of only 1,600 km and Ida in 1993, with detailed images of the celestial bodies being taken. In the latter, an asteroid moon was discovered for the first time . The 1–2 km large chunk was called " Dactyl ".

A year later, Galileo saw a dramatic event. The comet Shoemaker-Levy 9 crashed into Jupiter, which is still 238 million km away. Despite the distance, Galileo was able to capture unique images of the direct impacts that occurred on the far side. On earth itself, the effects could only be observed after the planet had continued to rotate. Had Galileo not been sent to Jupiter three years later as a result of the Challenger catastrophe , the probe would have been able to follow the comet's impact at close range in Jupiter's orbit.

When in mid-April 1991 the ground station radioed the command to unfold the 4.80 m large parabolic antenna , it could only be partially opened. The possibility of data transmission with more than 130 kbit / s was no longer possible. One tried the development several thousand times, but in vain. The probe was then reprogrammed in such a way that the received data were temporarily stored on the central computer as well as on a tape drive and then sent in portions by the much weaker round antenna to earth. However, since this only allowed a very low transmission rate, the probe was given new software - including algorithms for data compression  . This enabled a considerable amount of scientific data to be transmitted despite the failure of the parabolic antenna. There were also other problems: The rewinding mechanism of the magnetic tapes often got stuck, but the tape could always be made to run.

At a distance of 82 million km from Jupiter, the daughter probe separated from the mother ship in July 1995. Their journey came to an end on December 7, 1995. At a speed of 170,000 km / h, the daughter probe plunged into the atmosphere of Jupiter at an angle of about 9 °. Within just two minutes, the speed was braked to about Mach 0.9, the deceleration of the probe being up to 230  g . Approximately 2/3 of the material of the ablative heat shield ( carbon fiber / phenolic resin ) was removed, whereby it was exposed to temperatures of up to 14,000 K. Well, at a dynamic pressure of 6 kPa a first braking parachute opened and pulled off the blown off rear fairing with the pocket of the main parachute. The heat shield was thrown off and measurements began. At a depth of 50 km below zero level (defined at 1 bar pressure), wind speeds of over 500 km / h could be measured. These winds did not only occur horizontally, there were also strong downdrafts and turbulence in the vertical. And that although the probe went down in a "fair weather area" in which the nephelometer (fog meter) registered clear weather .

Radio contact broke off about an hour after entering at a depth of 160 km. In the last few seconds the probe registered a pressure of 22 bar (up to 10 bar should be examined at least) and a temperature of 152 ° C.

Meanwhile, after a 50-minute main engine ignition, the mother probe turned into an elliptical Jupiter orbit. The point closest to Jupiter (Perijovum) was 185,000 km and the furthest (Apojovum) 19.3 million km. The Apojovum was flown through in March 1996; then the perijovum was raised to 786,000 km with a 24-minute re-ignition to avoid the probe being endangered by particles ejected from volcanoes on Io . The other orbits were carried out in different orbits in order to be able to better observe the moons of Jupiter .

Exploring the moons; Burning up in 2003 in Jupiter

After the failure of the main antenna, the originally planned permanent observation of the Jupiter weather had to be abandoned. This was adopted by the Hubble Space Telescope and only those cloud formations that were considered particularly interesting were also observed by Galileo.

Instead, the main task of the probe was to observe the four Galilean moons . Evidence of an ocean of water under the ice crust of Europe has been provided, as well as zones of liquid water in the mantles of Ganymede and Callisto and the volcanoes on Io. Both Io, which is constantly kneaded by the tidal forces of Jupiter, and the largest moon in our solar system , Ganymede, have an iron core; Surprisingly, Ganymede has a strong magnetic field .

The mission part at Jupiter was originally only planned for 23 months until December 1997, but was then extended a total of three times because the equipment and drive were still functional and good results could be expected. The focus of the first two mission extensions was the moon Europa, while in the last part of the mission two fly-bys of Io inside the Jupiter system - dominated by dangerous radiation - were dared. When Cassini-Huygens used Jupiter for a swing-by acceleration on its way to Saturn at the end of 2000 , interesting parallel measurements were made.

On September 21, 2003, Galileo was directed into Jupiter's atmosphere and burned up there, as the probe would later not have been steerable due to lack of fuel and failure of the electronics due to the high radiation dose received from Jupiter over the past few years. There was a risk that Galileo could fall on the moon Europa and contaminate it with terrestrial microorganisms. This would have made future missions to study traces of life on Jupiter's moons difficult.

The following important information is missing from this article or section:
Information on the on-board instruments, drive, power supply, etc. is missing
Help Wikipedia by researching and pasting it .

Missions to the outer solar system

Space probes to comets and asteroids

Overview: Chronology of the space probes for comets and asteroids