Dactyl is a small moon of the asteroid Ida , which belongs to the S-type main belt in the Koronis group, an asteroid belt between Mars and Jupiter .

It is the first asteroid moon to be discovered. Its mean diameter is 1.4 km.

Dactyl was discovered on February 17, 1994 by Ann Harch from the Galileo mission team while looking through pictures taken when the Galileo spacecraft flew by on August 28, 1993. These images provided the first direct evidence for the existence of an asteroid moon. The discovery was announced on March 12, 1994; the moon was given the provisional designation S / 1993 (243) 1 .

On September 26, 1994, the moon was officially named by the International Astronomical Union (IAU) after the dactyls , demons from Greek mythology who lived on the Ida Mountains on the Greek Mediterranean island of Crete . The dactyls protected the young god Zeus after he was hidden and raised by Ida on the mountain. Other mythological sources say that the dactyls are the children of Ida and Zeus themselves.

Dactyl is the English singular form of "Daktyloi" (Greek for "finger").

Dactyl orbits Ida in a prograde orbit at a mean distance of 108 km from its center (3.44 mean Idaradien). The orbital eccentricity is 0.2; the orbit is 8 ° inclined to the equator of Ida .

However, Dactyl's orbit is not precisely known. Galileo was in the orbital plane of the moon when most of the recordings were made, which made it difficult to determine the exact orbit. In addition, the distance covered by Dactyl was too short at the time of the recordings, as Dactyl was moving around Ida at only 22 km / h. 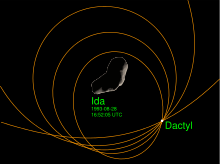 Possible orbits of Dactyl around Ida

At the time of the flyby, Dactyl was about 85 km from Ida. Based on computer simulations, the periapsis of the dactyl orbit must be at least about 65 km to ensure a stable orbit. The bandwidth of the calculated orbits was limited by the necessity that they had to pass through the points observed by Galileo at 16:52:05 UT at 85 ° longitude.

The exact orbital time could not be determined and is estimated at 37 hours.

The self-rotation is at least eight hours, but may be in sync with the orbital time . The long axis of the moon was aligned with Ida at the time of the flyby, which suggests more of a synchronous rotation. 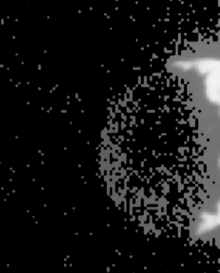 Dactyl in reflected light from Ida

Dactyl is an irregularly shaped, but remarkably evenly ellipsoidal body with an extension of 1.6 × 1.4 × 1.2 km, based on the assumed retroreflective power of 21%. The deviation from a perfect ellipsoid is no more than 130 meters. The mass of Dactyl is estimated at 4 · 10 12  kg.

Assuming a mean diameter of 1.4 km, the surface area is around 6 km 2 , which is just about the size of the German North Sea island of Baltrum .

Like Ida, the surface of Dactyl is saturated with craters, which indicates old age. It has at least a dozen craters larger than 80 meters. The biggest two were Acmon and Celmis called. Acmon is located exactly on the day-night boundary (138 ° E, 39 ° S) on the best- resolution image and measures 280 meters, Celmis is slightly below the center of the image (220 ° E, 46 ° S) in the shade and measures 160 meters . At least six craters in a linear chain indicate locally formed debris that may have been blasted off by Ida and hit the moon. In contrast to the ones found on Ida, Dactyl's craters most likely have central mountains. This and the rounded shape indicate that Dactyl is gravitationally bound despite its small size. The mean surface temperature of Dactyl, like that of Ida, is estimated to be −73 ° C.

In the spectrum, Ida and Dactyl are similar to the rest of the members of the Koronis family. Small spectral differences suggest that space-induced weathering is less active on Dactyl than on Ida. Its small size would make the formation of large quantities of regolith impossible, in contrast to Ida, which is covered by a thick layer of this material. In addition, it is assumed that the proportion of pyroxenes and olivine in the composition of the two bodies is higher in Dactyl.

The creation of the Dactyl are two theories: either Dactyl was at a turning blasted another small body of Ida of the asteroid in comparatively recent past, or Ida and Dactyl are the remnants of an even larger source body which completely shattered in a collision with another asteroid and thereby formed the Koronis family. It is also possible that about 100 million years ago there was a major impact on Dactyl, which reduced its size.

Capture by Ida is highly unlikely. According to the laws of celestial mechanics , an object approaching Ida would only be deflected by this asteroid, but never be captured, if there were no third body that would slow this object down. 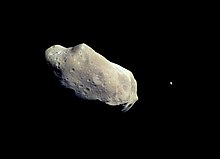 On August 28, 1993, Galileo recorded a total of 47 images of Dactyl over a period of 5.5 hours. When the first picture was taken showing Dactyl the probe was 10,760 km from Ida and 10,870 km from Dactyl; 14 minutes later the closest approach (2,393 km from Ida) to the system took place. The best resolution with Dactyl was 39 meters per pixel.

On April 26, 1994, the Hubble Space Telescope observed Ida for eight hours. Dactyl could not be observed, however, because he was outshone by the close proximity of Ida.

Since the discovery of Dactyl, which was spotted on the second pass of an asteroid, it has been assumed that asteroid moons are not an uncommon phenomenon in the asteroid belt . As early as November 1998, a second asteroid moon called Petit-Prince was discovered from Earth , orbiting (45) Eugenia .