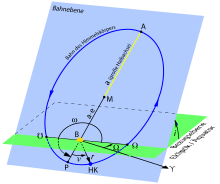 In celestial mechanics, the orbital inclination or inclination of a celestial body is the angle between its orbital plane and a reference plane . The orbit inclination is one of the six orbit elements of classic orbit determination and is denoted by the symbol in this context . Together with the length of the ascending node , it defines the position of the path plane in space. Orbital inclinations between 90 ° and 180 ° characterize a retrograde (opposing) orbit.

The orbital inclination of a celestial body is related to the direction of the orbital angular momentum vector of the body. By definition, this is perpendicular to the plane of the orbit. If no torque acts on the celestial body as a whole, as is the case with central forces, the orbital angular momentum and thus its direction do not change. In this case the body has a temporally unchangeable orbit plane in which it moves. Therefore, in these cases, with a fixed reference plane, the path inclination also remains constant. This is e.g. B. in the case of Kepler orbits (only two bodies in a vacuum ), and the orbit plane remains stable in its alignment under the fixed stars . In the case of gravitational disturbances by third bodies , a torque is exerted by them, so that the angular momentum vector changes. As a result, the orbit inclination, like other orbit elements, suffers small, sometimes periodic changes. The orbital elements are therefore specified as a series of oscillating terms with respect to an epoch , i.e. as an approximate solution that is valid at a certain point in time .

The reference plane of the orbit inclination depends on the celestial body under consideration: