The title of this article is ambiguous. Further meanings are listed under Hebei (disambiguation) . 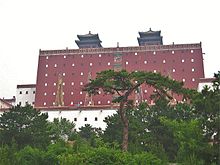 Replica of the Potala Palace in Chengde

Hebei ( Chinese  河北 , Pinyin Héběi , W.-G. Ho-pei , formerly after Post Hopeh ) is a province in the north of the People's Republic of China . The abbreviation for the province name is jì (冀), which is derived from the prefecture and the ancient state of Ji , in which the province was once located.

Zhili was the old name of Hebei before 1928, when the province was directly under the imperial court.

Hebei encloses the cities of Beijing and Tianjin . In the northeast, Hebei borders on Liaoning Province , in the north on Inner Mongolia , in the west on Shanxi , in the south on Henan and in the southeast on Shandong . In the east, Hebei is bounded by the Yellow Sea .

Hebei is bounded in the north by the Yanshan (Mountain Yan) and in the west by the Taihangshan (Taihang Mountains). In the southeast there are three plains that are part of the North China Plain .

The province is rich in coal and iron ore .

Hebei has a continental monsoon climate with an annual rainfall of 400 to 800 mm. Heavy rains are common in summer.

The provincial capital is called Shijiazhuang .

The Hebei plains were home to the Peking man , a subspecies of Homo erectus , 450,000 years ago . Since the 5th year of reign (1406) of Emperor Yongle and during the Qing dynasty , the province was called “Bei Zhili” ( 北 直隸 , Běi Zhílì , Pei Chih-li  - “North Zhili”), earlier Pechili or Pe-Tschili transcribed, and became 直隸 , Zhílì  - "directly ruled" (by the imperial court). After the Xinhai Revolution , (Bei) Zhili was the home province of various generals in the Beiyang government .

In the course of the Chinese reunification , the province was given its current name. After the occupation of Manchuria in 1931 and the establishment of Manchukuo in 1932, Hebei became a buffer zone between the Republic of China and the northern neighboring provinces of Rehe and Chahar, which were occupied by Japan . In 1935, the Japanese occupying power continued Tongzhou one of collaborationist Chinese warlords formed Autonomous Military Council of East Hebei one. After the Tongzhou incident in 1937, Japanese troops completely occupied Hebei and Beijing by 1945.

As part of the administrative reorganization of the People's Republic of China after 1949, the province was enlarged to include Chengde (Jehol) and Zhangjiakou (Kalgan), the former capitals of the dissolved provinces of Rehe and Chahar. On July 28, 1976, Tangshan City was struck by a violent earthquake , with a series of smaller tremors over the course of the decade. According to official figures, a total of more than 240,000 people were killed (see Tangshan earthquake in 1976 ).

Hebei is made up of eleven prefecture-level cities :

This article or section needs to be revised: Numbers do not reflect the current status
Please help to improve it and then remove this marking.

The district-free cities consist of 36 districts, 108 districts, 6 autonomous districts (three for the Manchu , two for the Hui and one for the Mongols and Manchu), 22 independent cities.

Xu Qin has been the governor of the province since 2017.

The ten largest cities in the province with the actual urban settlement population as of the 2010 census are as follows:

Of the 66,684,419 inhabitants of Hebei Province determined in the 2000 census, 95.65% were Han Chinese. In second place were the Manchus with 3.18% of the population , and in third place were the Muslim Hui with over 0.8%. The four autonomous counties established for the Manchu minority ( Fengning , Kuancheng , Qinglong , Weichang ) - three of them in the Chengde administrative unit (Qinglong belongs to Qinhuangdao) - make up 12.3% of the provincial area compared to the two autonomous districts established for the Hui circles Dachang (Langfang) and Mengcun include (Cangzhou) that only 0.3% of the area.

Mongolians are also worth mentioning, mainly in the north of Hebei and making up over 0.25% of the population. They share the Weichang autonomous district (4.8% of the province's area) with the Manchus. Of the 56 officially recognized nationalities of China, only one is not represented among the inhabitants of Hebei.

Hebei has the densest network of national highways and railways. Shijiazhuang and Shanhaiguan are the two main railway junctions in the province. Qinhuangdao is one of the most important ports in northern China while Shijiazhuang is the air traffic hub.

In Shanhaiguan , near Qinhuangdao is the end of the Great Wall . It runs through the northern part of the province. The Shanhaiguan is the most important pass in the east of the Great Wall. On the eaves of the east gate hangs a wooden plaque with the inscription: "First gate on earth" (天下第一 关, Tiānxià Dìyī Guān). It was made in 1472 by a graduate of the imperial exams.

The city of Chengde with its temples is a World Heritage Site of the United Nations . Chengde, formerly known as Jehol (also deer = hot river), is located 250 kilometers northeast of Beijing . The summer palace of the emperor was located here in the Qing Dynasty , where he resided with his court from May to October. The building complex covers 5.6 square kilometers and includes nine courtyards, eleven Lamaist temples, gardens and pavilions. The temples are replicas of famous temples from all over China, e.g. B. from Tibet .