This article covers the Chinese province. The asteroid named after her is described under (2631) Zhejiang .

Zhejiang is located south of the Yangtze River Delta in the southeast of the People's Republic of China and borders Jiangsu and Shanghai in the north, the East China Sea in the east, Fujian in the south and Jiangxi and Anhui in the west . Zhejiang is one of the smaller provinces of China with a north-south and east-west extension of about 450 kilometers, Zhejiang's share of the total area of ​​China is only 1.1%. Zhejiang is divided into six zones: a plain in the north, hill country in the west, a basin around the cities of Jinhua and Quzhou , hill country in the south, the hill country on the coast and the islands off the coast.

Zhejiang has a complex relief and is a mountainous province despite its coastal location: 74.6% of the area is mountains, 20.3% are basins and plains and the remaining 5.1% are bodies of water (lakes and rivers). The relief slopes from southwest to northeast. Three mountain ranges stretch across the province from southwest to northeast. The western Huaiyu Mountains range from the border with Jiangxi to Tianmu Shan and Qianligang Shan . The middle mountain range consists of the Xianxia Ling on the border with Fujian, the Siming Shan , the Kuaiji Shan , the Tiantai Shan and the archipelago around Zhoushan . The eastern chain includes the Donggong Shan on the Fujian border, the Dayang Shan , Kuocang Shan , and the Yandangshan . The highest point in the province with 1929 meters is called Huangmaojian and is located in the area of ​​the city of Longquan .

The most important rivers in the province are the Qiantang River , also known as the "Zhe River", which gave the province its name, the Ou Jiang , Ling Jiang , Tiao Xi , Yong Jiang , Feiyun Jiang , Ao Jiang and Caoe Jiang , in addition, parts of the Kaiserkanal run through the province. The four largest natural lakes of Zhejiang are the West Lake near Hangzhou, the Baltic Sea near Shaoxing , the Zhejiang near Jiaxing , and the Dongqian Hu near Ningbo . In addition, the Qiandao Hu, the largest reservoir in the province, was created through the construction of the hydropower plant on Xin'an Jiang . Zhejiang is the province with the most islands in China: Zhejiang has 2878 islands with an area of ​​more than 500 square meters, of which 26 are larger than 10 square kilometers. With just under 503 square kilometers, Zhoushan is the third largest island in the People's Republic of China after Hainan and Chongming .

Zhejiang has a subtropical , warm and humid climate with four seasons. The average temperatures rise from north to south and are between 2 and 8 ° C in January, between 27 and 30 ° C in July and between 15 and 18 ° C on an annual average. The annual amount of precipitation is between 1100 and 2000 millimeters, the annual sunshine duration between 1100 and 2200 hours. Most of the precipitation falls in the months of May and June. Typhoons often occur in summer and autumn, and on August 10, 2006, the province was badly hit by typhoon Saomai . 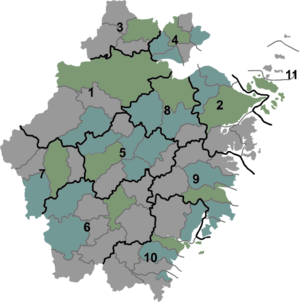 The following parts of this article appear since 2019 is out of date to be : Outline from the district level down outdated
Please help with to the missing information research and insert .

As of the end of 2018, Zhejiang was made up of the two sub-provincial cities of Hangzhou and Ningbo as well as the nine district-free cities of Huzhou , Jiaxing , Jinhua , Lishui , Quzhou , Shaoxing , Taizhou , Wenzhou and Zhoushan . At the district level there were 19 independent cities , 37 urban districts and 33 districts , one of which was an autonomous district . At the municipal level, the administrative units just mentioned are made up of 269 municipalities , 639 large municipalities and 467 street districts. The numbering in the following table corresponds to that on the adjacent card.

Due to the relatively high urbanization, Zhejiang already had six megacities in 2010. The ten largest cities in the province with the actual urban settlement population as of the 2010 census are as follows:

In 2010, the average life expectancy was 77.3 years (women: 80.2 years, men: 75.6 years), making Zhejiang well above the average for China of 74.8 years and the province with the highest behind the cities directly under the government Life expectancy is.

The Han Chinese make up the overwhelming majority of the population at 99.2%; according to the 2000 population census, 399,700 ethnic minorities lived in Zhejiang. The most important groups were the She (170,993 people), the Tujia (55,310 people), the Miao (53,418 people), the Buyi (21,457 people), the Hui (19,609 people), the Zhuang (18,998 people) and the Dong (17,960 People). Of these, only the She and the Hui were resident in Zhejiang before the establishment of the People's Republic, the other minorities came to the province through migration after 1949. The She live mainly in the rural areas of Wenzhou and Lishui . Zhejiang has 18 nationality communities for the She minority, there are around 400 villages where the She make up at least 30% of the population.

The average income per capita of the urban population is 18,265 RMB (2006) and has been in 3rd place for 6 years (behind Shanghai and Beijing).

The most important economic city in the province and one of the richest cities in the country is Hangzhou .

Zhejiang is known as the "land of fish and rice". The plain in the north of the province is an agricultural center and the largest producer of silk in China. The Zhoushan area is the largest fishing area in the country.

Zhejiang has developed its own development program promoting entrepreneurship, giving high priority and a focus on small business development, investment in infrastructure and mass production of cheap products for both consumption in China and export. Zhejiang has become one of the richest provinces in China. However, some economists doubt that the model is sustainable.

There are several railway lines and a dense road network in Zhejiang. Ningbo , Wenzhou , Taizhou and Zhoushan are important ports from which there are especially many connections to Shanghai .

The 6-lane Hangzhou Bridge , which runs 95 km to the east over the great Hangzhou Bay , was opened on May 1, 2008 after around 10 years of planning and construction. With a length of 35.673 km, it is the second longest overseas bridge in the world. This shortens the road distance between Shanghai and Ningbo by 120 km. Construction of the stay cable structure began in November 2003 and cost 11.8 billion yuan (US $ 1.1 billion).

The capital Hangzhou is the center of tourism in the province with the West Lake (西湖), the Liuhe Pagoda, the tomb of Yue Fei and the Lingyinsi Temple. Other important destinations for tourists are

Zhejiang is home to numerous monuments of the People's Republic of China .