The title of this article is ambiguous. Further meanings are listed under Typhoon (disambiguation) . 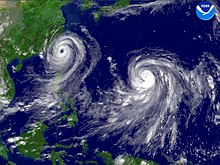 Typhoon refers to a tropical cyclone in East and Southeast Asia as well as in the northwestern part of the Pacific , west of the international date line and north of the equator. It is formed by a powerful low pressure area .

The modern word Taifun (English typhoon ) goes back to the overlap of at least two unrelated words with similar pronunciation and meaning. The term Tiphoon for strong storms and whirlwinds can be for the year 1555 show and derived from the Greek Τυφών Typhon from which can be translated as "whirlwind" and in Greek mythology, also the name of the giant Typhon is. His role as father of the winds suggests the origin of the Greek typhen . There are various etymological explanations for the modern term typhoon.

In the early Middle Ages, the Greek term in the form of ṭūfān ( Arabic طوفان'Sturm') have been adopted into Arabic and Persian , although a derivation as a noun from the Arabic tafa “to turn around” also seems possible. This word has been widely used regardless of its origin and is also the origin of the Portuguese tufão , which in turn may have had an influence on the modern term and is still used today to describe a typhoon. In the course of the infiltration and later conquest of the Indian subcontinent by the Arabs in the 11th and 12th centuries, it also spread to the local languages, especially Urdu . The significance of a severe storm, primarily in the Indian Ocean, then appears for the first time in 1588 in the English translation of an Italian travelogue by Thomas Hickocks. The basis of the report was the journey of the Venetian trader Cesar Fedrici in the 1560s to 1580s, where he mainly stayed in the cities of Bago (Pegu) and Martaban in Myanmar (then Burma) and there probably came across descendants of the Arabic term. As a result of the translation into Italian and later English, forms such as touffon and tufan became widespread in the English-speaking world.

The Cantonese tái fung ( Chinese  颱風  /  台风 , Pinyin tái fēng ), which denotes the severe storms in the China Sea and is quite similar to the Arabic term, is of great importance. The modern spellings typhoon and typhoon probably only represent its Latinization in their origin . However, this connection is still controversial today and ultimately not proven. For its part, tái fēng refers to a combination of 大 , dà  - "big" and 風 , feng  - "wind", but also has connections to 風 篩 / 風 颱 hong thai ( Min dialect ) or the Japanese taifū ( Shinjitai : 台風 , Kyūjitai : 颱風 ) and Indonesian taufan , all of which more or less mean "big wind". As an English equivalent, the word tuffoon appears for the first time in 1699 , which interacted with the various other forms and finally resulted in the current spelling typhoon . This first appeared in Shelley's Prometheus Unbound in 1819 and was widely used in the course of the 19th century. The name "Taifun" is a Germanization.

Typhoons are some of the most serious natural disasters in the Northwest Pacific. Every year they wreak havoc with hundreds of deaths. Serious damage is caused not only by the high winds , but also by the often very heavy precipitation falling in a very short time , which leads to floods and landslides . Typhoon Nari on September 17th and 18th 2001 brought up to 800 mm of rain in Taiwan within one day , which corresponds to the approximate annual average in Germany. Typhoon Morakot brought 1600 mm of precipitation in Taiwan in 24 hours regionally in August 2009 and claimed 673 lives. On the mainland , typhoons bring strong gusts of wind and rain, but then quickly weaken the further they penetrate inland. In a global comparison with hurricanes in the Gulf of Mexico and cyclones in the Indian Ocean , the tropical cyclones in the Northwest Pacific are the strongest in terms of meteorological parameters such as wind strength and diameter.

The Joint Typhoon Warning Center in Hawaii classifies typhoons with wind speeds from 241 km / h or 67 m / s as super typhoons, which corresponds to a category 4 storm on the Saffir-Simpson hurricane wind scale .

The most devastating typhoon of the 20th century was Typhoon Nina in China in August 1975. The typhoon broke two large dams and 10 smaller ones. The tidal waves that were up to 10 meters high killed 100,000 people.

The most expensive typhoon in terms of insurance claims was Typhoon Mireille from September 1991 in Japan, which caused comparatively few fatalities with 51 people, but caused costs of 9 billion US dollars, making it the tenth most expensive natural disaster. In this regard, it was only exceeded by various hurricanes such as Hurricane Katrina 2005, Hurricane Andrew 1992 and the Northridge earthquake (USA 1994).

The most famous typhoons are probably those that destroyed the two attempts at invasion of Japan by the Chinese Mongol emperor Kublai Khan in the 13th century. Since then they have been called "divine wind", "breath of God" in Japan 神 風 , known and notorious as kamikaze in another context.

Well-known typhoons of the last decades are for example:

The British circumnavigator and privateer William Dampier once described a typhoon in which he found himself off the Chinese coast on the afternoon of July 4, 1687:

“The storm came up from the northeast, the rain fell in torrents. Towards midnight there was a violent thunder and lightning. The next morning the storm subsided. The sea was unnaturally calm, there was no wind. At noon the wind came up again, from the opposite direction, from the southwest. Just like the previous night, it rained and stormed, but not as badly. It stayed that way until around 10 p.m.-11 p.m. Dampier and his crew were able to go very fast in front of the wind the whole time, although they only 'sailed' with bare masts. "

A detailed and very impressive description of a typhoon in the China Sea can be found in the short story Typhoon by Joseph Conrad .