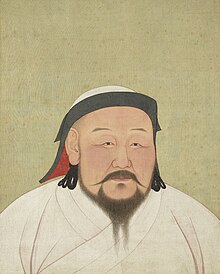 Kublai Khan , also Qubilai Khan , Kubilai Khan or Setsen Khan ( Mongolian ᠬᠦᠪᠢᠯᠠᠢ ᠰᠡᠴᠡᠨ ᠬᠠᠭᠠᠨ Kublai Sezen Chaan , born September 23, 1215 , † February 18, 1294 in Beijing ), was a grandson of Genghis Khan and an important Mongol ruler from 1260 to 1294 . From 1271 he was Emperor of China and thus founded the Yuan Dynasty . Kublai was the son of Tolui , the fourth son of Genghis Khan, and a brother of Möngke Khan . His successor was Timur Khan .

Childhood and reign in Northern China

Although the prince had, among other things, Chinese educators and advisers, he still lived permanently in Mongolia in his youth . When it came to maladministration in his Chinese lands, he moved permanently to China in the 1240s and soon became a representative of Chinese interests.

Immediately after his brother, the khagan Möngke Khan, came to power, Kublai was appointed governor in northern China; as such he conquered the kingdom of Dali in Yunnan in 1253/54 . Even then, a number of capable officials gathered around him (among others: Lian Xixian, Liu Bingzhong) and also the Chinese military who tried to improve the Mongolian administration in China. Kublai's relationship with the relevant people in the capital Karakorum such as Bolgay and Alamdar, on the other hand, was bad: The traditionally set tribal nobility accused him of his China-friendly attitude, so that Möngke had him temporarily removed from the period from 1257 to 1258.

Furthermore, the princes Goden (son of Ögedeis ) and Kublai, who professed Buddhism , were instrumental in handing over the administration of Tibet to the Tibetan monastic scholar Phagspa between 1251 and 1253. They thus established the rule of the Sakyapa on the roof of the world, which lasted until 1354 . Later Phagspa was also appointed imperial teacher and spent a long time at Kublai's court. It was initially Kublai Khan who made Buddhism the state religion of the Mongols. At the same time, this religion had a protective effect for his empire against all other kinds of influences and thus contributed not insignificantly to the cohesion of the empire. Tibetan wandering monks later achieved the conversion of the shamanistic Mongols into the 16th century .

After Möngke's death in 1259, Kublai Khan declared himself a Mongolian Khagan in a power struggle against his younger brother Arigkbugha, contrary to tradition . He was elected by an assembly called by himself on May 5, 1260, but this assembly was not representative, as the majority of the princes who were actually entitled to vote alone stood on the side of Arigkbugha, and it also did not take place in Mongolia. With the help of the troop leaders gathered in northern China, including quite a few Chinese, he won a four-year fratricidal war (1260 to 1264) militarily against the traditionally oriented part of the tribal nobility in Karakorum, who had favored Arigkbugha as Khagan.

Mainly his brother Hülegü , the ruler of the Ilchanat in Persia , was ready to recognize him as a khagan . The relations of Kublai Khan with his cousins ​​on the Volga ( Golden Horde ) remained fruitless, those with the masters in the Chanat Chagatai were repeatedly hostile. Despite these differences, the Mongols were still able to keep the great empire under control.

Kublai Khan gradually moved his capital to Beijing between 1256 (the beginning of the construction of Shangdu ) and 1274 (the completion of the palace complex in Beijing) and adopted the administrative practices of the Chinese and, to a certain extent, their culture . He was well aware of the risks of a Sinization of the Mongols in China, which is why he divided the population into four groups and, despite repeated petitions , did not reintroduce the traditional official examination , the decisive means of legitimizing Chinese dynasties. Nevertheless, his politics together with his change of residence earned him the disapproval of a significant part of the Mongolian nobility, as they preferred a leader living in the steppe to a "son of heaven" living in Beijing.

In addition, Kublai's dynastic aspirations drove other princes from power. The disapproval of his policies, also combined with personal vanities and claims, repeatedly led to high-ranking princes in Kublai's immediate sphere of influence rebelling. The khagan's toughest opponent was Ögedei's grandson Qaidu , who had established himself on the Ili and knew how to benefit from these rebellions .

On a campaign against Qaidu, several princes like Toqtemür, Shirki and others from the Toluis family quarreled with two of Kublai's sons, captured them and then moved east to Mongolia. In the following year, in the summer of 1277, they were defeated by Kublais General Bayan († 1295) at the Orkhon in Mongolia and dispersed, soon becoming enemies among themselves. Although the khagan benefited from the impermanence of his opponents, the rebellion did not end until around 1283 with the capture, surrender and flight of their leaders.

Another major rebellion broke out in Manchuria in 1287 . Several princes from the descendants of Genghis Khan's brothers, such as Nayan and Singktur, rose after administrative measures in their camps and sought contact with Qaidu, who then advanced to Mongolia. Kublai Khan acted quickly and personally defeated Nayan on the Liao River in the summer of 1287 , while Qaidu's army was forced to retreat near Karakoram in the summer of 1289. These successes were based on the numerical superiority of Kublai's troops , but were not enough to persuade Qaidu to give up. 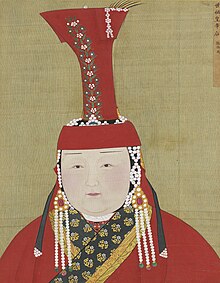 With the help of his generals, Kublai Khan conquered the state of the Southern Song Dynasty in southern China after a long war from 1267 to 1276/79 . Disputes in the central administration and in the State Council of the Song Empire under Chancellor Jia Sidao (executed 1275) had undermined the loyalty of the civil servants and ultimately the army command, so that Kublai was able to resume his brother Möngke's plans to conquer. After a long siege of the forts on the Han River in Sichuan Province (especially Xiangyang , besieged from 1268 to 1273), the Yuan army advanced into Hangzhou . The Song capital, Hangzhou, surrendered in 1276, the last followers of the dynasty held out until 1279, when the little heir to the throne, Song Bing, drowned in a sea battle.

Kublai thus reunited the country after more than 300 years of division and proclaimed the Yuan dynasty in 1271 , as its first emperor he ruled under the Chinese name Shizu (元世祖). He was also accepted into the line of legitimate Chinese rulers.

Two Mongol invasions in Japan in 1274 and 1281 were unsuccessful (cf. Kamikaze ), so that the further expansion of the Mongol Empire now also came to an end in the east.

At the time of Kublai Khan's death, the Mongol Empire was the territorially largest state structure in world history and extended over almost the entire Eurasian continent. The population benefited from an organized civil administration, the effects of which were later summarized under the term Pax Mongolica . Although the yuan administration also had its downsides, which became apparent in Kublai's last years of life, for example, and did not achieve the reputation of other great Chinese dynasties, it was in any case a significant improvement over the policies of the previous khagans.

In Europe it was and is considered to be particularly significant that the Pax Mongolica opened up new trade opportunities in connection with the economic recovery in Persia and China. The book of Marco Polo deserves a special mention here: In 1266 the Venetian traveling salesmen Niccolò and Maffeo Polo arrived at the court of the Mongol rulers in Beijing, where they were welcomed and received by the Khan, according to their own statements. He gave the Polos three gold tablets and, with a message to Pope Clement IV , instructed them to send him anointed oil from the Church of the Holy Sepulcher in Jerusalem and about a hundred Christian scholars to spread the Gospel among his subjects.

According to his own travel report ( Il Milione ), Marco Polo later stayed with his father and uncle on a second trip to Asia from 1271 to 1295, now on the official mission of the new Pope Gregory X. for several years at the court of Kublai Khan, became a very close confidante, traveled even traveled through China several times on behalf of the khagan and reported on returning to Italy on the high culture of the east. However, there is no clear evidence of this in the well-preserved chronicles of the Yuan period.

Kublai's second main wife, Chabi, had a great influence on his politics while he was still alive . But after their death in 1281 and the death of Crown Prince Dschingkim in 1286, as well as due to his own illness, Kublai left the government in his last years to unpopular favorites such as the finance minister Ahmad Fanakati , Lu Shirong and Senge . Tax increases and inflation as well as the introduction of new paper money in 1287, the value of which was only 1/5 of the old one, intrigues in the administration and repeated military expenditure marked these years. In contrast, the construction work on the northern section of the Kaiserkanal was rated positively.

Kublai Khan died on February 18, 1294 in Beijing, successor as Khagan and Emperor of China was his grandson Timur Khan .

After his death, the following khagans were only chosen from among his descendants, other princes were excluded from the line of succession (→ Yuan dynasty ). These rulers continued Kublai's policies and largely focused on the administration of China. There were renewed conflicts of interest between pro-Chinese and pro-Mongolian parties at court, but the representatives of China usually had the longer breath. Attempts to renew the Mongolian idea of empire, around the time of Külüq Khan or Qoschila , therefore remained a marginal phenomenon .

After mismanagement and a series of natural disasters around the middle of the 14th century, the Mongols were driven from Beijing. In 1368 the Ming dynasty came to power and the Mongols withdrew to the steppes. Only a decade after the death of Biligtü Khan , the founder of the "Northern Yuan", their old Mongolian capital Karakoram was also destroyed by the Chinese in 1388.