Ruins of Shangdu, the ancient capital of the Yuan Dynasty 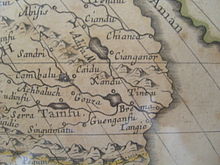 Shangdu ( Ciandu ) on a map by the French geographer Nicolas Sanson , around 1650

Shangdu ( Chinese : 上 都, Shàngdū or 元 上 都Yuán Shàngdū ), also known as Xanadu , was the summer residence of Kublai Khan , the emperor of China , during the Mongolian Yuan dynasty . It was created in 1256. Early Western knowledge of Shangdu dates back to an alleged visit by Marco Polo in 1275. In 1369, Shangdu was captured by Ming troops and then completely destroyed. The last Mongolian emperor of China, Togan Temur , was able to escape the city before. The ruins of the former city were partially uncovered, archaeologically examined and made accessible to the public as an open-air museum . The ruins have been recognized as a UNESCO World Heritage Site.

The ruins Shangdus now lies about 29 km north-east of Duolun on the shore of Luan River , which here, where he a bow by the Inner Mongolia pulls Shandian He (闪电河) is called. It is also located in the administrative area of ​​the Wuyi State Livestock Farm on the northeast border of the administrative area of ​​the Shangdu Municipality in the Zhenglan banner of the Aimag Xilin Gol of Inner Mongolia, People's Republic of China .

In 2012 the ruins of Shangdu were included in the UNESCO list of World Heritage Sites under the title Site of Xanadu , in German "Ruins of Xanadu" . In the application, this is justified with four criteria: The ruins show an urban planning which illustrates the integration of the culture of the Mongols and the Han; The surrounding landscape and the former gardens show the symbiosis of nomadic culture and agriculture and they remind of the role of the city as the venue of a great debate between Buddhists and Taoists in the 13th century, which resulted in the spread of Tibetan Buddhism in Northeast Asia.

Shangdu's reception in the west as "Xanadu"

Manuscript of the poem Kubla Khan by Samuel Taylor Coleridge

In the west, the city is also known as Xanadu, which goes back to the 1816 poem Kubla Khan by the romantic English poet Samuel Taylor Coleridge . Its first stanza is:

In Xanadu, Kubla Khan did
A stately pleasure-dome decree:
Where Alph, the sacred river, ran
Through caverns measureless to man
Down to a sunless sea.

In a German adaptation by Wolfgang Breitwieser :

In Xanadu, Kubla Khan created
A pleasure palace, proud and heavy with a dome:
Where Alph, the river of salvation, ran
Through caves that no one can measure
In the sunless sea. 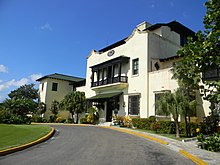 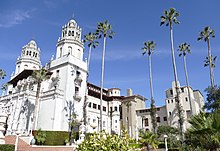