This article covers the empire that existed until 1912. For a later attempt at restoration, see the Chinese Empire (1915–1916) .

Empire of China at the time of the Qing Dynasty , 1820

The Chinese Empire was founded in 221 BC. Founded by Emperor Qin Shihuangdi . He formed it from several kingdoms which he had gradually conquered. In its long history, the empire split up into numerous partial states several times and was reunified three times: in 280 by the Jin dynasty , in 589 by the Sui dynasty and in 1279 by the Mongolian Yuan dynasty .

The empire existed (with interruptions) for 2132 years until the proclamation of the Chinese republic by Sun Yat-sen on January 1, 1912; the last emperor Aisin Gioro Puyi abdicated on February 12, 1912. Yuan Shikai , the first President of the Republic of China, made himself "Emperor of China" in 1915. This “Kaiserreich”, which was abolished in 1916, and later restoration attempts are of little historical significance.

The partly mythical rulers of the early days (see Chinese mythology ) have gone down in history and are sometimes referred to as “ primordial emperors ”, especially in Western representations ( Chinese partly as huang ,皇, partly as di ,帝). 1 In the narrower historical sense, they were not emperors ( huangdi ,皇帝). The rulers of the pre-imperial Zhou dynasty are considered kings ( wang ,王).

Traditional chronology of the ruling dynasties

→ Main articles : History of China  and the chronological table of China

There have been different dynasties in Chinese history . The partly mythological "dynasties" before the emergence of China as a unitary state - i.e. before the establishment of the Chinese Empire - were:

The dynasties of the Chinese Empire that began in 221 BC BC was founded by the ruler of the then Kingdom of Qin (秦國) and for the first time united the whole empire, were: 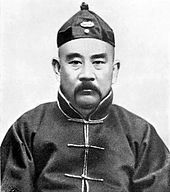 In the first half of the 20th century there were several attempts to restore the monarchy in China: