This article or section needs revision: very few sources and evidence
Please help improve it , then remove this flag.

This article covers a section of Chinese history. At the same time in Japanese history, see Sengoku period .

When the Warring States Period ( Chinese  戰國時代  /  战国时代 , Pinyin Zhanguo Shidai ) the time between 475 v. BC and 221 BC In Chinese history .

At the beginning of the period there were 16 remaining powerful principalities. Around the middle of the period, seven stronger empires remained until, after years of intense fighting, the Qin empire under Qin Shihuangdi subjugated the other empires and unified China. Qin's unification of China is considered by historians to be the end of ancient times in China and the beginning of the era of the imperial dynasties.

The Warring States Period, like the period before it, was the season of spring and autumn annals, a time of upheaval and change. Traditions were overturned, new ideas emerged. The competition between states for better technologies, administration and ideas allowed philosophy, literature and science to flourish. Commerce and cities grew to a size previously unseen. Many of today's Chinese cities emerged during this period.

The division of the time from 770 BC Until the unification of China by the Qin dynasty in 221 BC. The two periods of the spring and autumn annals and the warring states can be traced back to the Han dynasty .

However, this division is more of a traditional nature, since the transition between the two epochs was fluid: At the beginning of the spring and autumn annals, China was a feudal union of hundreds of small principalities under the sovereignty of the Wang (King), the had lost power and had to be supported by a strong prince, which was reflected in the office of the hegemon . From the decay process of the Eastern Zhou kingdom who went to the middle of the 5th century Warring out: A few, powerful princes at the external border secured the northern Chinese central plain before, barbarians' and competed at the same time for supremacy without possible nor hegemony was .

The beginning of the Warring States Period was linked to various events that took place in the 1st half of the 5th century BC. Took place: the conquest of the state of Wu by the state of Yue (473 BC), the division of Jin into three new principalities (475-453 BC) and a dynastic change of power in Qi (the de facto Rule of the Tian clan in place of the Jiang princely family was consolidated around 481 BC). But other upheavals were also used for the subdivision, in the Song dynasty the historical work Zizhi Tongjian ( 資治通鑒 , Zīzhì Tōngjiàn ) only set the division to the year 403 BC. Chr.

At the beginning of the period there were around 16 princely states. At that time, the Zhou royal family had largely sunk into insignificance and performed mainly ceremonial tasks. 403 BC However, the royal court confirmed the division of the powerful state of Jin ( 晉 ) into the three successor states Wei ( 魏 ), Zhao ( 趙 ) and Han ( 韓 ). In addition to Wei, Zhao and Han, the states Qi ( 齊 ), Yan ( 燕 ), Chu ( 楚 ) and Qin ( 秦 ) were among the most powerful parties of this period. The Warring States name primarily refers to these seven states.

Other empires were rather small and lasted until 300 BC. Incorporated the great: In Luoyang , surrounded by the state of Han, resided the royal house of the Zhou. South of Qi was the state of Lu , home of the thinker Confucius , and again south of the state of Song , which kept the deposed royal house of the Shang , and where the most important trading city of the era was, Dingtao . The states Wey , Zheng and Zhongshan were also contested by the major states .

Wei was the first state to introduce social reforms. Above all, the civil service system was reformed. An office should no longer be passed on from father to son, instead only capable people should take over an office. The origin was no longer paid attention to, so that even non-nobles could hold high office. In the military, too, the tradition that only nobles were allowed to serve as officers was interrupted. For the first time, a performance factor was made compulsory for the military career: the rank of an officer was determined according to his success - if he was successful, he was promoted to a higher rank, otherwise he was demoted. Even normal soldiers could rise to the rank of officer in this way. A new agricultural policy encouraged farmers to grow more grain. The judiciary was also reformed and a code of law was issued. This was intended to standardize case law.

The reforms in Wei resulted in a strengthening of the state, so that Wei soon became the strongest state. The example was immediately imitated by the other states, especially Chu and Qin. Chu and Qin were two states on the edge of what was then Chinese territory. Chu's center was south of the Yangtze River . It did not originally belong in Zhou territory at all. Qin was only raised to a princely state at the beginning of the eastern Zhou dynasty. He was on the north-western border of the country. At that time, both states were viewed as semi-barbarians and even laughed at. Qin's reform was the most radical. So the peasants' ties to the land were lifted and the loan system was completely abolished. Instead, the land was distributed directly to the farmers. With this, the peasants were freed from serfdom and gained personal freedom. Officials were no longer enfeoffed with land, instead they were given pay. This system also strengthened the loyalty of the civil servants, since without their office they no longer had a livelihood. Military service was given special emphasis. Nobles who had no military successes automatically lost their status. In military service, the reward was determined by killed enemies. Those who killed more enemies received more rewards, which could also be expressed, for example, in the form of a rise to the nobility. Here, too, the judiciary was reformed. So the laws now applied to all people. Although nobles, and that means with Qin those who were especially distinguished in military service, enjoyed a lighter sentence, they too were measured with equal rights. With the abolition of the feudal system, the administration of the country also had to be changed. The administrative unit rural district ( 縣 , xiàn ) was introduced for this purpose. The reforms laid the foundation for the later unification of China by Qin.

In the middle of the time period, all of the smaller states were annexed by the big ones, so that the buffer zones between these states fell away. The fight between them became increasingly bitter. The military strength of Qin in particular became more and more apparent, so that at times the other six states concluded alliances against Qin. However, through skillful diplomacy, intimidation, bribery and due to opportunism, rivalries among themselves and the short-sightedness of many rulers, Qin was able to break these alliances again and again.

247 BC 13-year-old Zheng came to the throne of the Qin King. At 22 he gained full government power and began his war of conquest. 230 BC As the weakest state, Han first fell victim to the Qin army. 228 BC The capital was captured by Zhao and the king captured. A prince could flee and continue to resist, but he too was defeated in 222 BC. Caught in BC. An assassination attempt on the Qin King, initiated by the Crown Prince of Yan, was taken by the Qin King as a welcome occasion for the attack on Yan. Yan's capital fell in 227 BC. BC 225 BC BC attacked Qin Wei. After a three month siege of the capital, the king of Wei gave up. 224 BC It was the turn of the Chu in the south. When finally 221 BC BC Qin's army invaded Qi, they met hardly any resistance.

After the unification of the country, King Zheng proclaimed himself First Emperor of China and founded the first imperial dynasty of the Qin .

During the Warring States Period, almost all states implemented reforms that abolished the feudal system and freed the peasants from their ties to the land. In agriculture, the huge farms were increasingly being replaced by family businesses. The tax system had to be reformed accordingly. From then on, the farmers had to pay taxes to the state depending on their land ownership. 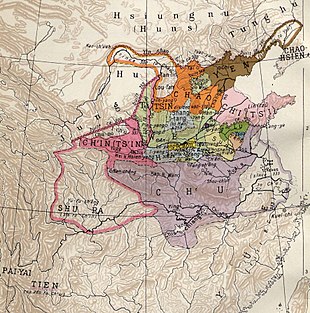 The trade experienced a particular boom . The wealth of some merchants could be compared with that of kings. They maintained trading posts and information networks in several states. The trader Lü Buwei was even offered the position of Grand Vizier of Qin. The first knife and spade coins were minted at the time of the Warring States .

Salt and ore extraction was particularly important in the craft sector.

The greatest technological advance during the Warring States' era was the introduction of iron tools. Iron became the predominant material not only in handicrafts, but also in agriculture and military technology and replaced bronze .

Some very important irrigation systems have survived from the Warring States period , including the Dujiangyan ( 都江堰 , Dūjiāngyàn ), which to this day averts the spring floods and summer drought from the Sichuan basin . Sections of the great Chinese canal were already laid out at this time.

The three northern states of Qin, Zhao and Yan have built a wall to defend against the nomads from the north. It forms the basis of the later great wall .

During the Warring States' era, the Chinese discovered the use of magnets to indicate the direction of the compass. They made a spoon out of magnetic iron and placed it on a smooth copper plate. The spoon was shaped so that its handle always pointed south.

The use of acupuncture was recorded for the first time in medicine .

At that time, warfare was vital for states. Accordingly, many innovations in warfare were introduced at that time. The liberation of the peasants from their bondage to the land and the opening of military service to them also increased the number of foot soldiers. The army on foot became the predominant force. Yan was the first state to introduce cavalry , the technique was adopted by the nomads. The fast-moving horsemen soon replaced the chariots . An early form of the crossbow was also invented during the Warring States Period . There were also improvements in siege and defense techniques, which meant that cities, for example, could be besieged for years.

However, the Warring States Period was also a heyday of Chinese philosophy . In an atmosphere in which the royal houses competed with one another for power, technology and ideas, many thinkers and their disciples and followers moved from state to state in the hope of finding a ruler who would like their ideas. Many of these philosophers were also gifted writers and left behind numerous works that are still teaching material for ancient Chinese in Chinese schools today.

Particularly noteworthy at this point are the poems of the Chu poet Qu Yuan (340 BC to 278 BC), whose work is unique for that era. Instead of the then common poems of only four characters and relatively shortness, Qu Yuan wrote very long and relatively free poems that are full of emotions. Of the 20 or so poems ascribed to him, The Sorrows of Separation ( 離騷 , Lí Sāo ) and Questions to Heaven ( 天 問 , Tiān Wèn ) are particularly noteworthy. In The Sorrows of Separation , he expressed his grief over being separated from his beloved King. In Questions to Heaven , the desperation of the persecuted poet is represented with questions to Heaven. The emotionality of the poems is unique for the circumstances at the time.

The oldest finds of Chinese painting also date from the Warring States period .

States at the time of the Warring States