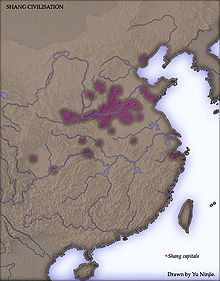 The Shang Dynasty ( Chinese  商朝 , Pinyin Shāngcháo ) is traditionally regarded as the second dynasty in Chinese history . She ruled China between the 18th century BC. Until about the 11th century BC. It followed the Xia dynasty , which was controversial in its existence, and was replaced by the Zhou dynasty . The Shang Dynasty is the first Chinese dynasty to leave contemporary written documents. The later period of the Shang dynasty, the Yin period ( 殷 ), has now been very well researched. In total, names of 30 kings from 17 generations have been passed down. All these names were found on the oracle bones from Yinxu , so that most historians assume that these kings actually lived.

The Shang Dynasty was founded by a tribal leader who had successfully rebelled against the last Xia ruler. Its capital was called Háo and was believed to be in what is now Shandong Province . Later documents suggest that the Shang rulers moved their capital six times. The last time from King Pan Geng ( 盤庚 , Pán Gēng ) to Yin ( 殷 ). Since no remains of the other five capitals apart from Yin have been found so far, some historians still consider the story of Pán Gēng to be unsecured. 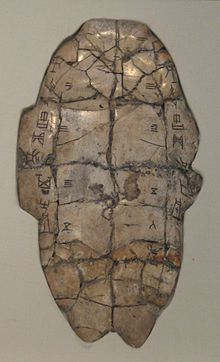 The Yin period is considered to be the peak of the Shang Dynasty, so this is sometimes also called the Yin Dynasty.

The last king of the Shang dynasty Dì Xīn ( 帝辛 , also known by the name Zhòu, 紂  /  纣 ) was considered particularly wasteful and sadistic. He took his own life when his army defected to the rebels in a decisive battle. The name Zhòu is still a synonym for tyranny and tyranny in China.

After the fall of the Shang dynasty, the members of the royal family swore allegiance to the new Zhou kings and took the family name Yin, which was the result. They became vassals of the Zhou kings and also served them as ministers in high offices. According to later reports, both of Chinese and Korean origin, a Yin prince and his retinue settled near what is now Pyongyang and founded the first Korean state there. The Kong family originated from an offshoot of the Yin clan, from which the Chinese philosopher and wisdom teacher Confucius descended and which is still in its 75th generation today.

The remains of the city of Yin

Yinxu , the remains of the capital of the later Shang Dynasty, were discovered near Anyang City in Henan Province in the early 20th century . In addition to the foundations of palaces and temples, eleven royal tombs were found there. Over ten thousand objects made of bronze, jade, stone, bone and ceramics have been excavated so far. In addition, there are more than 20,000 oracle bones that provide insights into politics, economics, culture, religion, geography, astronomy, calendar, art and medicine of that time. The remains of the city of Yin are the most important archaeological discovery related to the Shang research.

The territory of the Shang stretched from the coast of the East China Sea to the western border of today's Shaanxi Province, to the south to the Yangtze River and to the north to today's Liaoning Province . It included the middle and lower reaches of the Yellow River and parts of the Yangtze River.

The kings of the Shang Dynasty were regarded as representatives of God on earth and thus enjoyed not only the highest worldly power, but also the highest spiritual authority. The excavated royal tombs are rich in additions for the dead, so it can be assumed that the Shang people believed in life after death . Hundreds of slaves were buried with the kings; these should probably continue to serve the dead kings after their lives.

The civil service was divided into secular administrators and clergy officials. For example, clergy officials were responsible for offerings and oracles . There is also evidence that shamanistic Wuism was very widespread and belonged to the Shang religion . The first written Chinese documents were oracle bones , which were primarily used to consult a divine judge. Spirits as well as ancestors were worshiped .

Women apparently enjoyed a high position in society. So many oracle bones came from high-ranking noblewomen. One of these noble women was General Fu Hao , wife of King Wu Ding .

It is noticeable that the remains of weapons have been found at all the excavation sites in Yin. The oracle bones report clashes with the nomads from the north and west.

Crimes were punished with imprisonment or with cruel physical punishment. 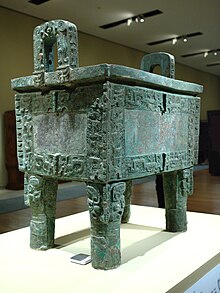 Houmuwu Ding , made in the Shang Dynasty, is the heaviest piece of bronze work found in China to date

Agriculture was the most important branch of the economy. It was operated on a large scale and organized. There is evidence of the brewing of alcoholic beverages with grain . The use of silk can also be proven .

Intensive trade was made with neighboring peoples and tribes. A good road network favored traffic and the formation of the first Chinese cities.

The first preforms of the Chinese script have come down to us from the Shang period. Many of the characters found on the oracle bones have survived to this day (albeit in a modified spelling). In addition to yin, oracle bones have been found in other areas along the Yellow River. The brush, with which Chinese characters are written, was also invented during this period.

Unearthed figures depict musicians and dancers. However, it can no longer be verified whether music and dancing were performed as a religious ceremony or for pleasure.

The Shang Dynasty was a state structure in what is now China, which interned prisoners of war for the purposes of "excessive human sacrifice" and for forced labor. The mass human sacrifice was "a central part of the political self-expression in China of the Bronze Age (..) Nobles and vassals asked the king for permission for human sacrifices, which he granted if an oracle promised favorable conditions. Sometimes 30 people were asked for the one deity, times ten sacrificed for someone else. If the king died, several hundred people were even killed ".

Thousands of sacrificed people were buried in the capital of the Shang Dynasty, called Yinxu . A total of over 13,000 human casualties are estimated, the remains of which are in the royal cemeteries of the Shang period and which have been excavated since the 1930s. Christina Cheung from the Canadian Simon Fraser University used isotope measurements on excavated bones to show that they were prisoners of war who had been interned for a long time and were held for occasions when there was a need for human sacrifice.

The earliest Chinese iron tools were found in yin. Very ingenious bronze containers and tools have already been made. Vessels made of white ceramic were also excavated.

Records of comets have been found on the oracle bones . Movements of the planet Mars have also been identified.

Notes on diseases were also found.

Ruler of the Shang Dynasty

The ruler of the Shang dynasty was appointed king during his reign and emperor only after his death.

* All dates come from documents that were created much later; therefore they are not historically secured and are often given differently, if at all. The absolute chronological classification is given here on the one hand based on the historical tradition according to Liu Xin and in an incomplete column on the basis of the information determined by the Chronological Project Xia-Shang-Zhou
** These names may not be the actual names of the kings. They seem to be a kind of posthumously given honorific name.