The title of this article is ambiguous. Further meanings are listed under Henan (disambiguation) .

Henan ( Chinese  河南 , Pinyin Hénán , W.-G. Ho-nan , German: Henan / Honan) is a province in the eastern center of the People's Republic of China . Henan is home to the cities of Luoyang and Kaifeng , both of which were capitals of the Chinese Empire at different times . Henan has 94.02 million inhabitants and was the most populous province in China until the last census in 2010. Today Henan ranks third after Guangdong and Shandong . The name, composed of hé (河 - "river") and nán (南 - "south"), means "south of the river" and refers to the Yellow River (Huáng Hé). 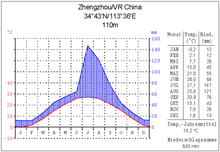 In 1954, the capital was moved from the old Kaifeng Cultural Center to the industrial city of Zhengzhou . The province lies on both sides of the Yellow River , which flows through the province over a length of 700 km; however, most of it is south of it. Henan is clearly demarcated from the other provinces of China by mountains and rivers as natural barriers to the west, northwest and south, while in the east it opens up to the Great Plain, which offers very good conditions for growing grain.

The neighboring provinces are Anhui , Hubei , Shanxi , Hebei , Shandong and Shaanxi . In addition to the provincial capital Zhengzhou , the cities in the province also include the old imperial cities of Kaifeng and Luoyang .

Henan's climate is continental with cold and relatively dry winters and hot and humid summers. Temperatures and precipitation increase from north to south. Henan is threatened by natural disasters to a great extent. Nearly 1,000 drought and flood disasters have been reported in the past 2,000 years . On the one hand, the various shifts in the riverbed of the Yellow River in its lower reaches had an impact on agriculture in the province; on the other hand, the heavy rainfall in summer quickly leads to an increase in the water flow in the rivers, which can then overflow their banks. The dikes and canals that have been built since the 1950s have led to an improvement in protection and thus also the conditions for agriculture.

This article or section needs to be revised: concerns "community level" in info box: is not up-to-date or has a named status.
Please help to improve it and then remove this marking.

The population figures are based on the 2010 census and refer to the actual urban settlement. The province's urbanization rate is below the Chinese average. 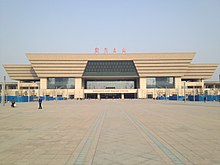 The Zhengzhou East Station, which opened in 2012, has 32 tracks

Agriculture continues to play an important role in the province's overall economy; Henan is considered the most important granary in central China. Around 82% of the province's population live in the countryside, only 18% in cities.

Of great importance are the Beijing – Guangzhou and Xuzhou – Lanzhou high-speed lines crossing Henan , which meet in Zhengzhou, making this city the second largest railway junction in terms of traffic volume in China in 2014 and the Zhengzhou East station the largest transfer station in Asia in 2015. Industrialization is concentrated along the high-speed routes, while in the rural areas with little traffic there is still great poverty.

The small town of Nanjiecun has received international attention in reporting due to its original collectivism and economic successes.

On June 14, 2007, the Chinese police said they had freed over 200 slaves from brickworks in the province of Hénán; 29 children were among them. During the three-day raid , 35,000 officers examined 7,500 brick factories in the area and arrested 120 suspects. The slaves were beaten and forced to work without pay. Previously, an online petition from around 400 fathers had caused a sensation, denouncing the inaction of the authorities because of the kidnapping of their children.

Henan opera is a well-known form of Chinese opera . Near Luoyang are the Longmen Grottoes , since 2000 the UNESCO - World Heritage belong.

Henan is considered the region of origin of the Chinese culture and nation. Its inhabitants see themselves as descendants of the Yellow Emperor . 19 dynasties had their seat here: near Anyang , in Luoyang and in Kaifeng . Accordingly, Henan was home to many historical and literary personalities ( Laozi , Zhuangzi , Han Fei , Lü Buwei , Shang Yang , Li Si , Yue Fei , Du Fu , Bai Juyi ...). With the invasion of the Jurchen and the Mongol invasion, Henan's central function ended. The center of power was moved to northern China and Henan lost its key position.

Stupas at the Shaolin Temple

There is only one real attraction around the provincial capital Zhengzhou , the Shaolin Monastery. It was built 1500 years ago, at the time of the Northern Wei Dynasty , at the foot of the Song Shan Mountains not far from the Yellow River and is quiet and deserted in the mountains. The emperor at the time had it built in honor of the Indian monk Ba Tuo, who had advised him well on political issues. About 20 years later, the Indian monk Bodhidharma (Chin. Da Mo, Japanese Daruma) arrived in Shaolin to spread his conception of Buddhism, which is now known as Chan or Zen Buddhism . He was shocked by the poor physical condition of the Buddhist monks (caused by sitting for long periods of time while meditating) and devised an exercise system to train the monks' bodies and keep them healthy. Exercises like Xi Sui Jing (washing of the marrow) and Yi Jin Jing (transformation of tendons and ligaments) were the origin of Shaolin Quan Kung Fu . The pagoda forest , Talin, is just under a kilometer southwest of the Shaolin Monastery . It is the cemetery of the monastery complex with 220 small pagodas that contain the ashes of famous monks. The differently designed pagodas all face south, the home of Buddha .