This article covers the Chinese province. For the asteroid named after her see (2632) Guizhou . 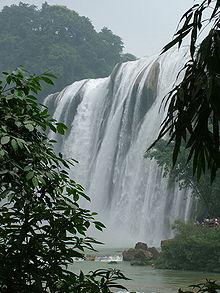 The province is a mountainous basin that, according to an old saying, has " no three feet of flat land, no three days without rain, and no man with three yuan ." It was difficult to access from the outside world and is considered the poorest province in China.

Here, with the Huangguoshu waterfall, is the largest waterfall in Asia . The pronounced karst landscape is the central settlement area of ​​the Bouyei .

About 73% of the area are pending limestone . The basin of the karst formations is only small. There are numerous caves and underground rivers in the limestone .

The climate is subtropical and humid with blurred contrasts between the seasons. The annual average temperature is 15 ° C and the average annual precipitation is 900 mm – 1500 mm. Guizhou is cloudy on 220 days a year, making it the province with the most cloudy days. The name of the provincial capital Guiyang means "precious sunshine".

Guizhou came under Chinese rule 2000 years ago. The province was founded in 1413 . The immigration of Han Chinese began during the Sui and Tang dynasties , i.e. between the late 6th and early 10th centuries, initially only to the western part of today's province. Han Chinese immigrated to the entire province in increasing numbers from the late 14th century, during the Ming and Qing dynasties . The Tunpu (屯堡 人) in particular , a group of Han Chinese whose ancestors immigrated around 600 years ago, have preserved many peculiarities of the Ming culture to this day.

After the fall of the empire and the collapse of the central power that began with it, warlords ruled the province in the first half of the 20th century . Around 1920 Liu Xianshi (刘显世) dominated, around 1926 General Tang Jiyao (唐继尧), who ruled the neighboring province of Yunnan, also controlled Guizhou. In 1935 the Zunyi Conference took place in Zunyi . Only then was the Kuomintang national government able to assert itself . During the Second World War, numerous merchants, officials and intellectuals fled here from the Japanese; they played an important role in the development after the war. On November 15, 1949, the capital Guiyang was captured by the People's Liberation Army , and on December 26, 1949, the People's Government of Guizhou Province was founded.

There are 17 different ethnic minorities in Guizhou, 14 of which can be described as autochthonous . The latter are mainly the Bouyei , Miao and Dong , but also Bai , Gelao , Maonan , Mulam , Qiang , She , Sui , Tujia , Yao , Yi and Zhuang . The Hui , Manchu and Mongols have immigrated in large numbers in the course of Chinese history . Together, the ethnic minorities make up 37% of the population and have regional autonomy on 55% of the area. The three autonomous districts in the south of the province deserve special mention: Qiannan , Qianxi'nan and Qiandongnan . Most of the autochthonous ethnic minorities live in the mountains, where they retreated when the Han Chinese advanced . 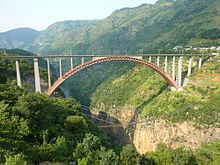 A village of the Bouyei , one of the hill tribes of Guizhou

Several million people live below the official poverty line, including a large proportion of people belonging to national minorities. Almost all of the new jobs and private businesses were taken by immigrants from Sichuan . The economic center of the province is the capital Guiyang. Thanks to the mild climate, agriculture in Guizhou is well developed. The main crops are rice, corn, potatoes, tobacco and sugar cane. The province produces a large number of different medicinal herbs and is one of four major medicinal herb growing areas in China.

Guizhou has a multitude of mineral resources. The province has the most important mercury deposits in China. The reserves of bauxite , phosphorus , manganese , antimony and coal are among the most important in the country. That is why branches such as mining , iron and steel industry , non-ferrous metal industry , chemistry and mechanical engineering dominate the industry. The food and tobacco industries are other important industries. But the best known is the Maotai liquor.

The economy in Guizhou is generally poorly developed despite the rich raw material deposits and the favorable location in the country. The GDP per capita in 2002 (according to CHINA currently 8/2004) was 3153 yuan (approx. 295 €) and was thus by far the lowest of all provinces in China. The difficult geographical conditions, which make economic development difficult, are probably responsible for this. In the wake of the sharp rise in demand for raw materials for the Chinese industry, the extraction was intensified and in the course of this, the GDP per capita rose in 2006 (according to a brochure of the provincial government from autumn 2007) to 5750 yuan (approx. 537 €). The government is increasingly striving to develop Guizhou economically. The traffic infrastructure is to be expanded.

Tourism is seen as having good development potential. Most of the transport infrastructure required for this is already in place.

About 170 kilometers by road south of the provincial capital Guiyang , near the municipality of Dawodang , the largest and most precise radio telescope in the world called the Five hundred meter Aperture Spherical Telescope ( FAST for short ) was completed in September 2016 .

The company Guizhou-Cloud Big Data Industry Development (GCBD) is based in the provincial capital Guiyang. Among other things, the iCloud data of Chinese Apple customers is stored there.

The ethnic minorities in Guizhou are among the most artistically and musically gifted in China. The Han also have a long and varied cultural past here. Various types of folk drama are widespread in the parts of the country, some of which are also combined with folk dances . Some Han folk dramas such as huadeng ("flower lantern ") in the north and dixi in the south of Guizhou are also popular with the minorities. Festive activities over the New Year include buffalo fights , particularly among the Miao, Yao, and Zhuang people. The Miao often sing about their revolutionary history and heroes, the folk songs of the Miao and Dong are very well known. For all minority groups, paper cutting and embroidery are important forms of folk art . The Buyi and Gelao are particularly known for their batik , the Miao and Buyi for their intricate, colored cross-stitch work and the Miao for their heavy silver ornaments .

Guizhou has numerous tourist attractions, and tourism in the region seems to be gaining more and more importance. The most notable sights include the Huangguoshu Waterfall , the largest waterfall in China and Asia; the Zhijin Cave , China's largest stalactite cave complex; the gorges of the Wuyanghe and the surrounding karst landscape ; the Dragon Palace Cave (Longgong), in which the individual chambers are lined up like a pearl necklace; and the building where the Zunyi Conference was held in 1935 .