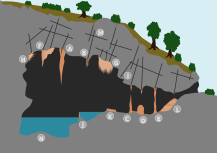 Different structures in a stalactite cave

A stalactite cave is colloquially referred to as a cave whose contents are marked by stalactites . Many show caves , i.e. caves that are open to the public and in which guided tours are offered, are known as stalactite caves. A well-developed network of paths enables safe viewing of the representatively illuminated natural structures. In this context, the imaginative naming of such stalactite formations is also popular, for example as Calvary, elephant, Mary with the child or mountain spirit.

Dripstones that grow from the cave ceiling towards the floor are called stalactites . Those growing upwards from the ground are called stalagmites . If both connect, one speaks of a stalagnate . The material that forms the dripstones is called sinter . The prerequisite for the formation of stalactite caves is a high content of dissolved minerals - usually lime - in the water, which are deposited in the cave.

The dragon's cave in Mallorca

The term stalactite cave is caving not in use.

In many scientific books, both historical and contemporary, the term is not mentioned at all, whereas it is still used today in popular scientific works. Ernst W. Bauer defines the stalactite cave as "a cave in which stalactite formations determine the character of the cave".

If you look at the list of show caves in Germany , you can see that 6 out of 50 caves have the term in their name. Of these, three are karst caves and the other three are so-called tuff caves, i.e. caves that were formed as primary caves when the tufa was deposited . This name is presumably derived from the fact that tufa can also be called dripping stone (stalactite); So it is about caves in stalactite. This is the only way to justify the fact that all three tuff caves under the show caves in Germany have this promising term in their names, even though they either have no dripstones or are extremely inconspicuous.

Today's use of the term is limited exclusively to the tourist and museum-educational aspect of the occurrence of stalactite formations .