from Wikipedia, the free encyclopedia
This is the spotted version , flagged on April 13, 2020 . There are 2 pending changes that have yet to be viewed.

The title of this article is ambiguous. Further meanings are listed under Cave (disambiguation) .

The brilliant stalagmite in the Postojna Caves , Slovenia (2007)

A cave is a naturally formed underground cavity that is large enough to be entered by humans and is longer than five meters. This definition of the term in caving ( speleology ) differs from the colloquial use.

Caves in the sense of this article are exclusively naturally formed cavities. Caves are created through geological processes.

Accordingly, cavities such. B. mines , earth stables , rock tombs , hypogea , catacombs , air raid tunnels , basement or artificial caves no caves. Lately the term Subterranea has been used for this (derived from the Latin word for “underground”), but so far mainly in English.

Primary cave with root threads in lava rock in Hawaii 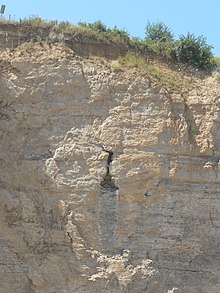 Outcrop with a small secondary cave in the Swabian Muschelkalk

Primary caves are caves that were created at the same time as the rock surrounding them.

Lava caves are also common . Often there are smaller cavities that were created by gas bubbles in solidifying lava. Most of the time, these cavities are only opened by accident. But there are also lava caves many kilometers long. These so-called lava tubes are lava channels whose surface has cooled and solidified, while the liquid lava continued to flow underneath until the eruption came to a standstill. Such caves can be found in Hawaii , Iceland and the Canary Islands .

Secondary caves are caves that were formed later than the rock surrounding them.

This category includes caves that have been created by corrosion (chemical weathering), erosion (mechanical weathering), tectonics (movements of the earth's crust or rock layers) or a combination of these influences.

Secondary caves are found in rocks that are water-soluble in the broadest sense, especially in the various types of limestone . Rainwater contains carbon dioxide , which it can dissolve depending on its temperature. Colder water can dissolve more carbon dioxide. Depending on the carbon dioxide concentration in the water, carbonic acid weathering of the lime occurs. By capillary action , the water penetrates into fine cracks in the rock and dissolves lime. That alone does not explain any significant cave formation. However, since the ability of water to dissolve lime does not run linearly with the carbon dioxide concentration, so-called mixed corrosion occurs : If two different solutions saturated with lime meet in the mountain and these mix, a new concentration of carbon dioxide is created, which is an additional Can dissolve lime. This can create a larger cavity at this point. This is the key to cave formation, so to speak. 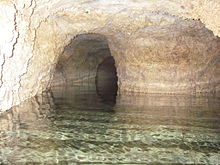 The Silberloch in Pleigne in the Swiss Jura : in the front part a flooded former mine (picture), in the back part an active water cave

The erosive (mechanical) forces of the water continue to appear in a formative manner, both in the secondary caves, which are primarily formed by dissolution processes, and in the primary caves ; one then speaks of active water caves . If the cavity is sufficient so that large amounts of water can flow through, it is possible that the water will carry away fragments of rock broken from the ceiling and thus significantly change the cave space. In the course of time, water penetrates deeper and deeper areas of the mountain and the previously flowed through become more or less anhydrous.

During this educational process one can distinguish:

In large cave systems, those with considerable height differences, one can find all three appearances. The deepest parts are often completely under water, the middle floors are traversed by water and the highest are dry. This is also where the cave begins to slowly decay: parts of the ceiling can collapse. If this happens just below the surface of the earth, this can be recognized by means of sinkholes (collapse funnels) (see also: Cenote ).

The cleft joint cave is also called a cleft cave or crevice cave . It is a tectonically created cave along fissures , which was created by corrosion in karstification-capable rocks (e.g. dolomite ) along a fissure.

Half caves are also called balms . Most of them are outbreaks in rock faces that are only caused by erosion. The main feature of these caves is that their depth is less than the width of the portal and they do not have a lightless cave part. From a great distance, such half-caves often look like portals of normal caves. Half-caves were occasionally used as dwelling caves in earlier times ( abri ), until more recently also by hunters or poachers.

Other types of caves

The Ogof Craig A Ffynnon cave
in Wales

Many caves have several names depending on how you look at them.

Designation according to the origin

Designation according to the shape

Name after the rock

One speaks of a cave system in connection with longer caves in which one can distinguish a main passage and a few side passages.

If it is possible to prove a connection between two neighboring systems, the name of the previously larger system is usually adopted for the entire system. One example is the Sac Actun underwater cave system in Yucatán . At the time of unification in 2007, Sac Actun was 14.3 km longer than the neighboring Nohoch Nah Chich system . The official name is therefore Sistema Sac Actun (with 222.7 km the second longest underwater system).

If you connect several caves by artificial connecting passages, a cave system is also created. In this case, the names of the caves are mostly retained. The name for the entire system is then, for example, “Bergerhöhlen-Platteneckeishöhlen-Bierloch-System”. This system consists of three originally separate caves in the Tennengebirge in Salzburg.

The following data may not be current. One of the reasons for this is that it often takes longer for research results to be published. Since caving is almost exclusively done by people as a hobby in their free time, the evaluation and documentation of the data obtained often takes longer. It is customary to publish data only after a conscientious survey of the discovered caves or cave parts has been carried out. The spaces traveled are not always measured immediately.

The mentioned records should also not be understood in a sporting sense. Exploring a very long cave, provided it has a larger number of entrances, can be much easier than exploring a cave that is much shorter but only has a single access point. The exploration of deep shafts has also been simplified since the introduction of the single-rope technique , at least from above. On the other hand, ascending a cave from below still places extremely high demands on the performance of the researchers and the amount of material required. 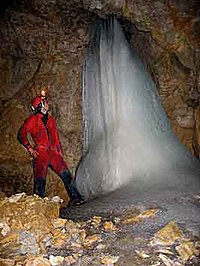 In the ice palace of the Grünbergalm ice cave, Ebensee ( Salzkammergut , Austria )

Caves were sometimes used for the permanent residence of people, e.g. B. as a dwelling ( dwelling cave ). Corresponding traces were found in the Stefánshellir in Iceland. In southern Europe and other warmer countries there were and are people who live in artificial caves, for example in Greece (e.g. Meteora monastery ).

Natural caves were also visited by ancient people who used them as places of worship and, if necessary, designed them as such ( cave paintings , petroglyphs ). Caves are the frequent sites for well-preserved cave finds from the Stone Age and are therefore of great importance for archaeological research. Entire cave groups were grouped together in this sense, such as the caves of the oldest Ice Age art on the Swabian Alb . A current example of an archaeologically actively researched cave is the leaf cave in Hagen. Cave finds also serve to research fauna and flora as well as a climate archive , in which, in addition to stalactites , duct shapes and sediment deposits can provide information about climate development.

Today the tourist use in the form of show caves is also important. Even the stretched and intermittent illumination with artificial light allows vegetation with chlorophyll, such as the mosses that spread through fine spores, to germinate , starting at the points of high illuminance , visible in the green.

The use as a quarry is less desirable , especially for the purpose of mining stalactites for sale to stone collectors or for making jewelry. In large areas of the Third World, caves that are often still unknown to science have been completely emptied. Another breakdown product from caves is bat guano .

The use of caves for caving is controversial .

In all forms of use, there are considerable conflicts between economic use and the interests of cave protection .

Cave as a motif

Caves often appear as a motif in myths , dreams or fairy tales . According to the analytical psychology in the tradition of Carl Gustav Jung , this is a special form of the mother archetype .