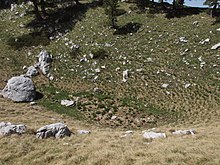 A sinkhole (from Slavic dolina "valley"), sink cave or karst funnel is a chimney, funnel or bowl-shaped depression with a mostly round or elliptical shape in karst areas . Their diameter usually varies between 2 and 200 meters, but can also be more than a kilometer. Their depth ranges from 2 to more than 300 meters. Dolines give karst areas their characteristic appearance. They can occur in high density: 782 sinkholes per square kilometer were described at most from the Alps, 187 in the Taurus . Solutions are always predominant over shaft dolines. Such sinkhole landscapes form a so-called polygonal karst, in that the catchment area of ​​the individual dolines is often interlocked with the others and these can thus fill the entire space of a landscape. Sinkholes can even dominate state areas by taking up a major part of the country's area; for Montenegro, for example, the value of 60% which lies within the edges of the sinkhole is often given.

The geomorphological term sinkhole was coined by the Serbian geographer Jovan Cvijić . In his doctoral thesis ( Das Karstphänomen , 1893) at the Vienna Geographic Institute under Albrecht Penck , he borrowed “sinkhole” from the South Slavic term for solution forms in the karst, the diagnostic form of which is the sinkhole itself. The term and general definition found their way into geomorphological terminology. The term sinkhole is applied to recent formations or paleo solution forms. In Das Karstphänomen, Cvijić related most of the description (53 of 112 pages) to the representation of sinkholes. Their predominantly corrosive emergence brought from their quantitative importance in the karst landscape an integration of karst into the idea of ​​the existence of geomorphological erosion cycles, which postulate a temporal development and different stages of the earth's surface. Alfred Grund (1914) and Cvijć (1918) formulated models for erosion cycles in the karst within the view coined by William Morris Davis that erosion cycles form the face of the earth's surface . Further improved models in the interpretation of the development of karst landscapes showed that the typical image of a karst landscape with its hollow and solid forms emerges through solution processes alone, even if tectonic processes have a role in regional development. In addition to the solution doline, Cvijić defined other shapes such as the suffusion sinkhole, collapse doline, snow sinkhole and the uvala .

Particularly in the case of the less soluble carbonates, strong fissures or the presence of numerous faults in the rock have a favorable effect on the formation of sinkholes, because this offers the weathering solutions a larger attack surface.

The rock is dissolved from the surface of the terrain. Dissolving dolines (also known as corrosion dolines ) are limited to carbonate karst, at least in humid regions, since evaporites, especially rock salt, are already dissolved in the subsurface before they can even be exposed over a large area on the earth's surface. Dissolving dolines also rarely arise in terrain that is too steep, as the surface runoff of the water here usually happens too quickly for chemical dissolution processes to be set in motion.

Collapse doline of the New Eisinger Loch with shell limestone in the sinkhole wall, Enzkreis, Baden-Württemberg

The mechanism for the formation of sagging and collapsing dolines is subrosion , that is, the dissolution of karstable rocks in the subsoil, accompanied by cave formation. The sinkhole is finally created by breaking down (part of) the cave ceiling, which can only manifest itself on the surface of the earth in the form of a funnel-shaped depression or in the creation of a high-lying cave entrance. In the case of sagging dolines, the cover rock itself is not capable of karstification, in the case of collapsed dolines it is capable of karstification. Sack and collapse dolines are also grouped under the name sinkhole dolines . They can be connected to widely ramified cave systems. In the meantime, the originally regional term cenote , used for karst holes on the Yucatan peninsula, is a synonym for collapse dolines.

Not to be confused with the Erdfalldolinen are also as subsidence or expressing, but anthropogenic by underground mining caused pinging or Bingen . There is an overlap with the term Mardelle : Mardellas can be (periodically) water-filled dolines, but can also arise differently (including anthropogenic).

In the case of alluvial dolines (also called alluvial dolines or erosion dolines), relatively old solidified surface layers do not break down into a cavity, but rather young, unconsolidated sediments are washed out via a path that already exists in the karstified subsoil. The sliding down of loose sediment creates a depression funnel on the surface of the terrain.

A special case of the alluvial doline is the ponor doline. A surface water runs over them directly into an underground cave system. A rather uncommon term for ponordoline is therefore search doline , which refers to the fact that the sinkhole is "visited" by flowing water.

The Valovito do is a tub-shaped giant doline with the lowest temperatures in Montenegro. It lies below Bobotov kuk and Bezimeni vrh

Often sinkholes occur in high mountains that were previously or recently glaciated. Formerly glaciated karst landscapes are counted as the glaciocarst type. That is why there are forms in the Glaziokarst that can be traced back to the effects of glaciers and those of dissolution processes in limestone. In addition, periglacial and fluvioglacial processes are involved in the genesis of karst landscapes in the high mountains. Under glaciers and in the trough valleys and Karen, which were formerly filled with glaciers, there are often giant dolines, which are called in the Slovenian Konta, in the Serbo-Croatian Dolovi and in the Spanish Jou (Picos de Europe). Such giant dolines are paleo sinkholes, the development of which no longer takes place under today's climatic conditions. Giant dolines can be found in the eastern Limestone Alps, the Hochdinarides and in the Picos de Europe. They can have a sharp-edged boundary in a glacial alpine ridge. In the glacial periods they were often a center of glaciation, as some giant dolines below alpine ridges in the Dinarides are still filled with snow and ice to this day (including Debeli namet in the Durmitor). Well-known giant dolines such as the Valovito do in Durmitor on the west side of the Bobotov kuk are nationwide cold spots. 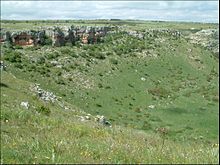 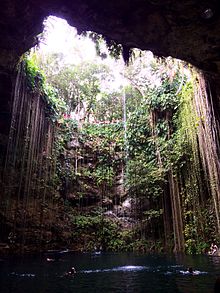 Sinkholes as typical karst forms occur wherever there are enough powerful karstable rocks underground. In Europe they are characteristic of the Dinaric limestone mountains on the western Balkan peninsula, especially in Slovenia , Croatia , Montenegro and Bosnia and Herzegovina , the type region of the karst and karst research. One of the most impressive sinkholes here is the Red sinkhole that collapsed around Imotski about two million years ago , the Red Lake , which is 280 meters deep. In their vicinity is the blue sinkhole , which is up to 100 meters deep when the water level fluctuates strongly. The greatest density of sinkholes in the Dinaric High Karst is achieved in the rain-rich western Montenegro. With almost 5000 mm of precipitation, a multiple of the amount registered in Central Europe, sinkholes dominate the relief. Their most distinctive forms can be found in the hinterland of the Bay of Kotor , where a landscape of the Polygonal Karst with a particularly large number of steep-walled sinkholes that are reminiscent of tropical cockpits has formed. The deepest water-filled sinkhole in Europe is the Pozzo del Merro in Italy near Rome.

There are also sinkholes in all other Mediterranean countries such as Greece , France (e.g. Gouffre de Padirac ), on Sardinia ( Su Suercone ), in southern Italy ( Murge ) and in Spain .

Numerous sinkholes also formed in areas of Central Europe affected by karstification, including the Alpine region, for example in the Rhenish Slate Mountains in areas with larger near-surface occurrences of Devonian limestone ( e.g. in the Linderhauser Senke in the east of the Wuppertal on the northern edge of the Remscheid-Altenaer Saddle), in the southern Harz foreland ( Zechstein limestone and gypsum karst), in Kraichgau (both burglar and dissolving dolines in Muschelkalk : sinkholes Eisinger Loch , Neulinger Berg, etc.), in the central Swabian Alb and in the Swiss Jura (both White Jura limestones), in the Moravian Karst ( Karbon Limestones) and in the Northern Limestone Alps , with u. a. the "Wolfsgrube" near Flintsbach am Inn (Upper Bavaria), various sinkholes in the Dead Mountains (Styria / Upper Austria) and the Grünloch near Lunz am See (Lower Austria).

Extensive sinkholes are also known from other continents and countries, such as the cenotes of the Yucatán Peninsula (Mexico) and the "sinkholes" in the karst of the Florida platform (USA). The largest sinkholes in America by volume are the Sima Major des Sarisariñama-Tepui in Venezuela and Sótano del Barro in Mexico .

A large cluster of giant sinkholes is found in the South China Karst . The Xiaozhai sinkhole in the province of Sichuan is probably the largest sinkhole in the world with an area of ​​537 × 626 m and a depth of 662 m.

Due to the sometimes considerable depth, the exchange of air is sometimes significantly restricted, which can lead to the formation of specific microclimates . One of the most famous phenomena are cold air lakes . They are caused by negative radiation balances that cannot escape in calm weather, especially at night and after fresh snow , due to the accumulation of cold air in the sinkhole and due to the heaviness and inversion formation. For example, frost is measured in the Swabian sinkhole Weidenwang ( Sonnenbühl municipality ) on more than 220 days a year. In 1932 in the Grünloch sinkhole near Lunz am See in Lower Austria , the lowest recorded temperature in Central Europe was measured at minus 52.6 degrees Celsius.

As a decisive factor in the strength of the inversion, i.e. H. the height of the temperature difference between the lowest point of the sinkhole and its surrounding area, the unhindered long-wave radiation from the sinkhole compared to the surrounding mountains has been identified. Only if the horizon overhead (engl .: sky-view factor ) is low, as the expression for the visible portion of sky hemisphere is from the center of the sinkhole of still visible, a long-wave return radiation from the surrounding slopes remains low and the cooling down is correspondingly high . 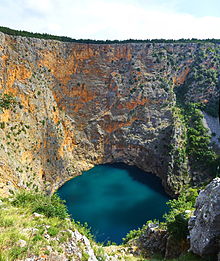 Many well-known sinkholes are characterized on the one hand by their striking dimensions or special features in the climate and in the biosphere. In particular, collapse dolines are landscape elements that arouse particular interest due to their vertical walls or the water filling.

Austria
In the Grünloch , a shallow sinkhole on the Dürrenstein plateau in the Ybbstal Alps , the lowest known temperature in Central Europe was measured between February 19 and March 4, 1932 at −52.6 ° C.

Italy
The sinkhole Busa Nord di Fradusta at 2607 m. ü. M. holds the temperature record in Italy with a temperature of −49.6 ° C.

Croatia The Red Lake at Imotski is spectacular . The collapse doline is over 200 m deep and filled with water. The deep blue of the lake contrasts with the reddish limestone walls.

Montenegro
The Opuvani do below the Velika Jastrebica at 1580 m altitude in the Orjen Mountains is a favorable microclimatic location for glacial relics and cold-loving animal and plant forms, along with the Mediterranean Sea.

In the high mountains, similar to crevasses in glaciers , the mouths of deep and steep sinkholes hidden under snow pose a danger for mountaineers and hikers . In addition to the high risk of injuring yourself from a fall, there is the difficulty of being able to climb out of such a sinkhole independently . The possibility of visually or acoustically communicating with passers-by is then often poor, and mobile phone reception is usually even more limited in such a situation than in other mountains.

In the Dachstein Mountains , people who fell into a sinkhole and were trapped in a sinkhole were searched for at least twice over several days: