The Cenote de los Sacrificios in Chichén Itzá is one of the most famous cenotes on the Yucatán Peninsula.

A cenote ( Spanish ; Mayathan ts'ono'ot , in place names mostly dzonot ) is a doline- like limestone hole that was created by the collapse of a cave ceiling and is filled with fresh water.

The term comes from the Maya of the Mexican peninsula Yucatán and means sacred spring . More than 1000 cenotes are known in the Mexican state of Quintana Roo , a far smaller number in the neighboring state of Yucatán and in Belize . Overall, the number of cenotes is estimated at over 10,000. On average, they have a depth of around 15 meters, occasionally even over 100 meters.

Origin, properties and use

Cenotes (Spanish plural; in German also often called cenotes ) arise in karst areas . As the limestone dissolves, caves and underground watercourses are formed. If the ceilings of these caves collapse , day openings ( Aston Collapse ) arise , which are called sinkholes in technical language and can reach down to the groundwater ( aquifer ). The Maya viewed them as entrances to the underworld ( xibalba = place of fear ) and often used them as religious sacrificial sites. The huge caves were considered to be the seat of gods of the underworld. 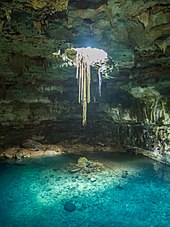 Many cenotes in Yucatán are connected to what is probably the largest contiguous underwater cave system on earth. The two longest systems, Ox Bel Ha (256.6 km) and Sac Actun (222.7 km), are each accessible via more than 140 cenotes. The total length of all explored underwater cave systems in Quintana Roo is 1085 km according to the current (January 2020) knowledge.

Researchers believe that these cave systems, most of which are under water, were the reason for the development of the Maya civilization, especially in the northwestern part of the Yucatán. The Maya used the cenotes as wells, they served as a water supply, which in almost all other high cultures came from large overground rivers, such as the Nile , Euphrates , Indus or Ganges . That is why some researchers also refer to the cave system as the “great river of the Maya”. Even the dense forest cover of the Yucatán despite the long periods of drought is attributed to the underground supply from the caves.

During the rainy season , the water masses flow into the aquifer . Fresh water is deposited near the sea within the cave passages on the salt water , so that both exist on top of each other, but do not mix ( freshwater lens ). A thermocline, the so-called halocline, forms inside the caves . The depth of the halocline increases continuously from a few meters near the sea to around 30 meters inland. By mixing corrosion occurs in the region of the halocline to a widening of the cavity cross section. The cenotes are often the only water holes in the Yucatán during the dry season and are therefore inhabited by a diverse fauna .

There is great interest all over the world to explore the cave system more closely. In the 2010s, the Christian-Albrechts-Universität Kiel also carried out a project to study the cenotes, in which scientists from various fields of research (biologists, geologists, geographers) and cave divers were involved. Among other things, they found offerings such as jewelry, ceramic vessels and human remains. These are considered to be a sign that the Maya sacrificed people in order to please the gods, which is already known from research at the Chichén Itzá cult site . The caves were also used as cemeteries. The researchers made all of these findings near the cave entrances. In lower regions prehistoric evidence of human activities was also found. These include an 8,500-year-old fireplace and a skeleton that has not yet been examined in detail. The caves did not fill up with water until a few millennia later, the sea level was initially around 100 meters below the current level. As a result of the Kiel project, the film documentary Hidden Worlds - The Cave of the Dead , which is available on DVD.

Even amateur divers have repeatedly gone down into the cave system, several hundred of them are said to have died. A particular challenge is the extreme depth of some tunnel systems, plus complete darkness, narrow passages and the sometimes sharp-edged structure of the walls and ceilings. Movements or even the air bubbles in the diving equipment can loosen deposits and cause avalanches.

The banks of the cenote openings are covered with marsh plants and water lily plants (Nymphaeaceae), the bare rock under water with crusting growing red algae (Rhodophyta). Pond turtles of the subspecies Trachemys venusta venustra live on the banks, and the vicious mud turtle Kinosternon leucostomum is almost always in the water . The fish fauna includes the cichlids Amphilophus robertsoni , Rocio gemmata and Friedrichsthal's cichlid ( Parachromis friedrichsthalii ), which are endemic to the east of the Yucatan , Paraneetroplus synspilus and the black-banded cichlid ( Rocio octofasciata ). In addition, the blind Brotulaart Typhliasina pearsei which poecilia sphenops ( Poecilia sphenops ) Poecilia mexicana , the poecilia velifera ( Poecilia velifera ), the Zweifleckkärpfling ( Pseudoxiphophorus bimaculatus ), the sleeper goby Gobiomorus dormitor that Guatemala catfish ( Quelen Rhamdia ) and tetra species Astyanax aeneus , Astyanax fasciatus and Astyanax mexicanus . From the latter, the cenotes are populated by the "normal form", while the blind cave form known as the blind cave tetra occurs only in three caves in the central Mexican state of San Luis Potosí . 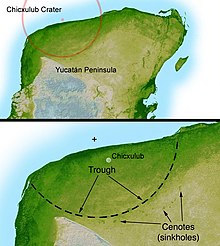 In the northwest of the Yucatán, the water-bearing layers and thus the caves follow the fractures and faults caused by the impact of the Chicxulub meteorite . The associated semicircular ring of cenotes still recreates the crater rim, which is otherwise long since buried.