The title of this article is ambiguous. For the Roman deity Fauna see Faunus , for the board game see Fauna (game) . 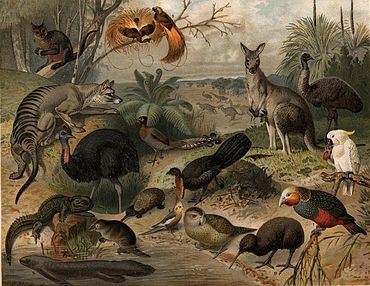 Fauna (also animal world ) refers to the totality of all naturally occurring animals in an area or, in the narrower sense, all animal species in this area. Exploring the fauna is the task of faunistics , the associated science is the biogeography . If the entire planet earth is considered, the fauna includes all animal species, for example in paleontology , where one speaks of a "fauna of the Cretaceous period ".

The name is derived from the name of the Roman nature goddess Fauna . The equivalent of the fauna in the plant kingdom is the flora .

Schematic example: fauna on an island, divided into four groups according to habitats

Occasionally, aquatic wildlife is referred to as aquafauna . It makes sense, however, to distinguish between the habitats salt water (sea) and fresh water ( rivers and lakes).

According to systematic large groups

According to body size

This classification is mainly made for animal species that live in the ground or on land.