The title of this article is ambiguous. Further meanings are listed under animal (disambiguation) . 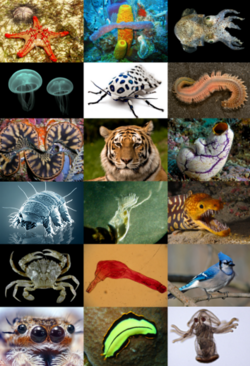 Animals are organisms with a cell nucleus ( eukaryotes ) that do not get their metabolic energy from sunlight like plants do, need oxygen for breathing , but are not fungi . Animals feed on other living beings for energy and material production ( heterotrophy ). Most animals can move actively and have sensory organs . The science of animals is zoology , the animal world is described as fauna , the plant world with flora . Taxonomically the animals form the realm of Animalia (derived from the Latin animus the soul in the sense of animated beings, biologically heterotrophic living beings with nerve-sense functions).

"Animals" are not a phylogenetic unit in the biological system . Mostly the group of multicellular animals (Metazoa) is referred to in taxonomy as the “animal kingdom” . Despite the great external differences between vertebrates , insects , starfish , jellyfish and all the other multicellular animals, these actually form a uniform systematic group with a common ancestor according to the current state of knowledge. The term Metazoa was originally coined as a contrast to the Protozoa , the unicellular animals. However, as is known today, the latter are not a group in terms of their tribal history. For example, the are ciliates used according to current knowledge in more detail with the plants (both groups among the Diaphoretickes ) than with the multicellular animals.

Although humans are also an animal from a biological point of view, in non-biological usage, including in legal contexts, they are not counted among animals.

The term animal ( Latin animal ), in German going back to Old High German tior (soul animal, wild animal) and related to Gothic dius (breathing being), was coined in ancient times and is the basis of the taxonomy established by Carl von Linné as well as the biological systematics . Until the 19th and the beginning of the 20th century, a distinction was only made between animals ( Animalia ) and plants ( Plantae ); this division was long held in introductory textbooks.

After analyzing their DNA sequences, the animals, the fungi and some essentially unicellular kin groups form a community of descent within the eukaryotes called opisthokonta . Characteristics of the opisthokonta are among others: Cell with only one flagellum (if not secondary regressive), this always without mastigonema and with two centrioles . Single-celled types or stages have mitochondria with flat cristae . The Opisthokonta then comprise two sister groups. One of them, the Nucletmycea, includes the fungi and some (mostly unicellular) related groups. The other, called the Holozoa, includes the animals and some related groups. These groups are:

The unicellular forms in most of these groups are characterized by long and unbranched cell processes (pseudopods) with a rigid inner skeleton made of actin filaments , while most of the other "protists" (e.g. the Amoebozoa ) develop broad, branched pseudopods. The filaments could correspond to the cell processes ( microvilli ) of the “collar” of the flagellates. The group most closely related to the multicellular animals are the frilled flagellates (Choanoflagellata), which have a lot in common with the choanocytes of the sponges (Porifera), a cell type within the vortex chambers.

The possible relationships of the groups examined in more detail so far and thus the closer relationship of the animals could look like this:

The systematics of animals currently used in Wikipedia can be viewed in the article Systematics of Multicellular Animals . At this point only the more recent developments in the system should be briefly presented. The systematics of animals is currently being intensively researched. The following presentation is therefore certainly not the final version. It is based on a number of current phylogenomic works, with more weight being given to the more recent / more extensive publications.

In the current system presented, it is particularly noticeable that the coelenterata are taken into account again. This is done according to Philippe et al. (2009) and contradicts, for example, Dunn et al. (2008). In addition, some common group names are no longer used for various reasons:

Animalia is often used as a synonym for Metazoa . The one to few cell Choanoflagellata are therefore not regarded as real animals, but as a sister group to the Animalia / Metazoa. The monophylum , which combines Choanoflagellata and Metazoa, then has no name.

Legal status of animals in Germany

In the tradition of Roman law , animals were long considered things under civil law. In Germany, in 1990, with the addition of Section 90a in the German Civil Code , they were separated from things, but are generally still subject to the provisions of property law. In Austria, a comparable amendment came into effect in 1988 with Section 285a of the Austrian Civil Code; in Switzerland it took place in 1993 with Art. 641a of the Civil Code. The German § 90a BGB reads:

“Animals are not things. They are protected by special laws. The regulations applicable to things are to be applied accordingly to them, unless otherwise specified. "

Animal protection is a national goal in Germany according to Art. 20a GG . The implementation is regulated in the Animal Welfare Act. There are also many other laws and ordinances such as the Federal Nature Conservation Act and the Federal Hunting Act as well as the Animal Welfare and Farm Animal Husbandry Ordinance or the Calf Conservation Ordinance , some of which also implement European law.

“The purpose of this law is to protect human life and well-being out of human responsibility for animals as fellow creatures. Nobody should inflict pain, suffering or harm on an animal without a reasonable cause. "

Depictions of animals in architecture 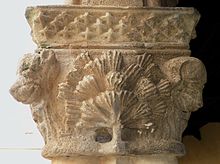 Animal figures appear in buildings and buildings frequently ornamental or decorative, such as Beast column , drolleries , Figurenkapitellen and Onigawaras . Some architectural elements always show a certain type of animal, including the Bukranien (cattle) , which were already widespread in antiquity, and the horse heads on Low German house gables. As Running dog one will meander -like Fries called.