The ciliates ( Ciliophora , outdated also called ciliata ) are unicellular eukaryotes that occur in fresh water , sea and soil and whose cell surface is wholly or partially covered by eyelashes , which are used for locomotion and for the swirling of particulate food . Eyelash animals are a tribe of the Alveolata , to which about 7500 species are counted. They are considered to be the most highly developed and most differentiated protists . Their special organization is also discussed as a further development of a syncytium .

Their length is between ~ 10 and 300 micrometers . In certain species , the length is even more than 1 millimeter. A network of contractile cytoskeletal filaments , such as actin myosin and microtubule filaments , enables the ciliate animals to change their surface structure and thus react to chemical and physical stimuli . Eyelashes react especially to changes in the oxygen and carbon dioxide concentration by changing the direction of movement ( taxia ) until they are in an area with more favorable conditions.

Trichocysts, which are arranged in a similar way to the eyelashes, are able to throw a long protein thread outwards when stimulated, although the function of this is not yet entirely clear. In addition, so-called toxicysts can occur in predatory species , which, like the nettle capsules of cnidaria, discharge, penetrate through the membrane of the victim and inject toxic substances in order to immobilize them.

A special characteristic of all ciliates is the so-called nuclear dimorphism , which means that they have cell nuclei of different sizes : a diploid small nucleus, the micronucleus , and a polyploid large nucleus ( macronucleus ). The macronucleus controls the soma , i.e. it represents the vegetative center of the cell, and can be regenerated by the micronucleus, which forms the germ line . If the micronucleus is removed from an individual, it is still viable but loses the ability to reproduce.

There are forms of ciliata with several micronuclei and also those that have several nuclei, but in which the soma and germ line have not yet been separated. Especially because of the species with several macronuclei and because of the very differentiated structure of the soma, it is discussed whether the ciliates did not emerge from a syncytial multicellularity. That speaks u. a. the multitude of cilia, which are structured like flagella, and the copulation behavior. The division of the whole body speaks against this in asexual reproduction.

Ciliata occur in the oceans and in fresh water as well as terrestrially in moist soil. There are free-floating and fixed forms. Some can live commensally , like the enodinia in the rumen of ruminants. With the help of cellulases, these can break down the cellulose from the ingested food. Some also live symbiotically with green algae ( zoochlorella ) stored in the inner layer . Still others are purely parasitic , such as Ichthyophthirius multifiliis , an important parasite of freshwater fish.

Most species are distributed worldwide, but more and more endemics are being discovered. Some species are only from the narrowly limited biocenoses of the Phytotelmata , e.g. B. the water funnel of the bromeliads or from the zootelma in the gill space of landlice known.

In general, all behaviors are coordinated by signal processes.

Asexual reproduction occurs in many species by a transverse division, in peritrichal ciliates by a longitudinal division. The species of the genus Colpoda show a specialty; these form division cysts in which several daughter cells arise. During sexual reproduction, ciliate animals exchange genetic material between different individuals during conjugation using a so-called plasma bridge . This exchange only takes place between individuals who belong to different mating types . This prevents members of the same mating type from exchanging genetic material. The mating types are defined by glycoproteins on the surface.

In this process, the conjugation, the macro nucleus gradually dissolves and from the micronuclei both partners of both are caused by division processes meiosis four haploid nuclei. With the exception of one of these haploid nuclei, all nuclei thus created also dissolve again. The two remaining nuclei now divide in a further mitosis into two haploid nuclei, a stationary nucleus and a wandering nucleus. The stationary core, also known as the female core, remains in the respective individual; the migrating nucleus or male nucleus penetrates the conjugation partner via the plasma bridge and merges there with its stationary nucleus. So every individual now has a diploid nucleus.

After the two sexual partners have separated, the diploid nucleus is doubled through a further mitosis , the macronucleus is built up from one of the two daughter nuclei through polyploidization , the other daughter nucleus remains unchanged as a micronucleus.

Nivaliella plana is one of the smallest ciliate species and feeds on soil fungi.

The food spectrum of the eyelash animals is wide. Many species feed on bacteria, others on flagellates, amoeba, algae or fungi, and still others are predatory and eat other ciliates. The diet extends over a cytostome , a mouth-like opening in the cell membrane. In front of the cytostome there is a characteristic depression in the cell surface, the buccal cavity . The food particle, packed in a so-called food vacuole , enters the cell interior through the cytostome . There the vacuole circles once through the entire cell body on a fixed path, while it is acidified by acidosomes and supplied with hydrolases by lysosomes . Inside, the food is broken down. The vital substances are absorbed into the cytoplasm and the residues are excreted in a kind of cell extractor, the cytopyge . The cyclic process is also called cyclose .

The ciliata living in freshwater also have one, two or more contractile vacuoles , which fulfill the function of an osmoregulatory drainage system. For this purpose, microtubule filaments lie in associations around a type of collecting channel that runs through the entire interior of the cell. The collected water escapes through an excretion porus. How exactly this device works has been controversial so far. However, its osmotic function is clear, since this device only occurs in freshwater species and there reacts to changes in the osmotic pressure with pulsating changes in contraction. This is so important because the lower ion concentration in the external medium allows the water to easily pass through the membrane into the interior of the cell and thus cause the cell to burst if it is not constantly transported to the outside through a contractile vacuole. 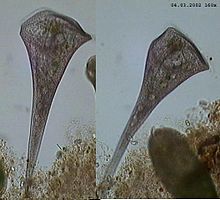 Who studied the longest and frequent Ciliata are the paramecium ( Paramecium ), the Stentor ( Stentor ), the arms animals ( Stylonychia pustulatae ) and the vorticella ( Vorticella ).

The systematic classification of the eyelash animals is still mainly based on the comparison of morphological characteristics. By improving microscopic technology (e.g. by scanning electron microscopy ), the structure and shape of the oral apparatus, the macronucleus and other organelles of the unicellular organisms can be used to classify the various groups in ultrastructural research . To differentiate the species, but also on a higher taxonomic level, the silver line system (neuroformative system) is made visible by impregnation with silver nitrate . This is the only way to prepare the system of lines and points that surround the entire body of every eyelash animal.

Here is an overview of the systematic classification of ciliates according to Adl et al. (2005):

A kind of uncertain systematic position is Arachnidiopsis paradoxa .

The oldest reliable fossil evidence of ciliate animals comes from the Devonian (possibly also Silurian ) and belongs to the Spirotrichea. Fossils are particularly common and widespread in Tethys deposits (Upper Malm to Upper Cretaceous ).