Time series recordings of a cell division of Dictyostelium discoideum , a slime mold . The division of animal cells is similar.
(Time in seconds relative to the beginning of the anaphase; scale above: 5 µm)

The cell division or cytokinesis , and cytokinesis (of Alt Gr. Κύτος kytos , cell 'and κίνησις kinesis , motion'), the biological process of the division of a cell . The plasma and other components of the mother cell are divided among the daughter cells by drawing in or forming cell membranes between them . This usually creates two, sometimes more, daughter cells.

Since in many eukaryotes the daughter cells have to receive copies of all essential cell components, cell division is strongly regulated. In particular, it must be ensured that the genome has been fully replicated . In organisms with cell nuclei , the eukaryotes, cell division is usually linked to a nucleus division ( mitosis or meiosis ) that takes place immediately beforehand in terms of time and regulation. Cell division can be initiated while the nucleus is dividing. Nuclear division and cell division are combined to form the cell cycle .

Cells that are part of the cell cycle , in which cell growth and cell division are constantly alternating, are called proliferating. The number of cell divisions per unit of time is the rate of division. It is specific for the respective cell type . In the case of single-celled organisms, the time between two divisions corresponds to the generation time . Cells of eukaryotes that no longer divide after differentiation are called postmitotic , such as neurons .

Examples of cell division that is not part of the normal cell cycle are budding and schizogony .

Since the prokaryotes , which include bacteria and archaea , do not have a nucleus , mitosis does not take place here. Here, after replication , the bacterial chromosomes attach themselves to the cell membrane , and a constriction of this membrane causes division, which creates two daughter cells. These are usually the same in size and shape. In some species , however , cells divide by budding (also: sprouting) in such a way that a small daughter cell, the bud, is created and a larger one, which receives the main part of the original cell.

In eukaryotes, cell division usually begins during the later phases of nuclear division, i.e. anaphase or telophase (see figures). However, it does not have to take place directly after a mitosis or meiosis. Renewed replication of the genetic material , i.e. the DNA , can also take place in certain cases without intermediate cell division, for example in the case of polytene chromosomes .

Animal tissue with proliferating cells.
Right in the center of the picture: Cell with the onset of cell division towards the end of a previous nuclear division - the chromosomes are still visible condensed in the telophase of mitosis. Beginning of cytokinesis with constriction of the plasma by the contractile ring.

In the fruit fly Drosophila melanogaster there are exceptions to the rule that a duplication of the genome is followed by cell division. At the beginning of the embryonic development, there is a rapid succession of synchronous mitotic nuclear divisions without cell membranes forming between the nuclei. The nuclei migrate to the surface and a "syncytial blastoderm " forms. Syncytium describes a multinucleated cell. After a few more nuclear divisions, cell membranes are finally formed between the nuclei and the next development phase, gastrulation , begins. In the larvae of the fly polytene chromosomes develop , in which the genome is multiplied within a cell nucleus.

Not all syncytia arise from nuclear division without cell division. For example, muscle fibers are created through the fusion of mononuclear cells while all nuclei are preserved.

In plant cells, cytokinesis occurs when a new cell wall is formed. This is done by fusing Golgi vesicles in the division plane from the inside outwards, progressing through a vesicular intermediate stage, the phragmoplast . A new cell membrane is created parallel to the cell wall. In both, however, small gaps, the plasmodesmata , remain, through which all the cells of the plant remain connected to one another in the so-called symplast and a distribution of substances through all cells is possible. 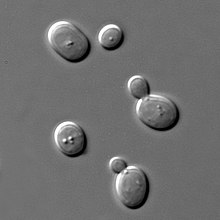 Baker's yeast cells: the sprouts of a daughter cell can be seen at the top right.

Depending on the great variety of fungi, different cell division mechanisms occur here. In the baker's and brewer's yeast Saccharomyces cerevisiae , also called scion yeast , a daughter cell is created by sprouting from the mother cell. In the case of the fission yeast Schizosaccharomyces pombe , on the other hand, the division takes place by splitting into two cells of the same size. In the slime mold Dictyostelium discoideum , a contractile ring constricts the daughter cells of the same size from one another, similar to animal cells.

The German doctor Robert Remak is considered the founder of modern embryology . In 1842 he described the three cotyledons ectoderm, mesoderm and endoderm. Before Rudolf Virchow and Theodor Schwann, he recognized the cell nucleus as the basic structure of cell division. Remak described the basic structure of the axon and the Remak ganglion. Later he worked in the field of galvanotherapy.