The title of this article is ambiguous. Further meanings are listed under Damnation (disambiguation) . 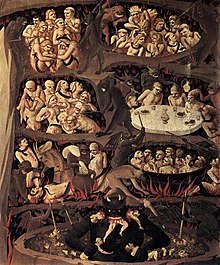 The damned in hell, detail of the Last Judgment by Beato Angelico , around 1431

Damnation (Old High German firdammon ; from Latin damnare , "to atone", "condemn", "discard"; from Latin damnum "penance", "loss", "damage"), also in the extension eternal damnation , means being rejected before God and the condemnation to the agony of a hellish punishment for acts committed. One who has literally “fallen into condemnation” is believed to be either in hell, not in the state of grace, or rejected by God.

Christianity teaches the existence of a hell . Hell is considered a place of eternal damnation, to which the souls of those who die of their own free will in mortal sin arrive after the particular judgment. The punishment is completed in the last judgment , "for after him the wicked are tormented in body and soul at the same time". Hell is in contrast to a place of absolute bliss ( paradise , eternal life, heaven ). The purgatory ( purgatory ) as the place of the final purification of the soul is completely different from the punishment of the damned.

In Islam there is also the idea of ​​an eternal damnation of the unrighteous in hell, which is called jahannam .

In ancient Egypt, for example, there was a belief in the Hetemite extermination site . In the 13 beliefs of the eminent Jewish scholar Moses Maimonides there is also the idea of ​​the destruction of the souls of the damned.

Within Hinduism , Madhva , the only Hindu philosopher, takes the view of an eternal damnation of the completely unrighteous in a hell known as Andhatamas ("blind darkness"). In some other religions, however, including some Christian groups, there is the annihilationist idea of ​​the annihilation of the soul.