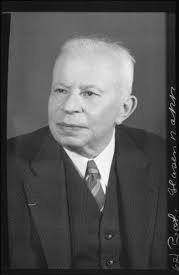 Otto Max Helmuth von Glasenapp (born September 8, 1891 in Berlin ; † June 25, 1963 in Tübingen ) was a German Indologist and religious scholar who taught as a professor in Königsberg (1928–1944) and Tübingen (1946–1959). Some of his books, with which he also addressed a broader audience, are still considered standard works today and are repeatedly reprinted in several languages.

From 1910 to 1914 Glasenapp studied Sanskrit , Pali and general religious studies at the Eberhard Karls University in Tübingen , the Ludwig Maximilians University in Munich , the Friedrich Wilhelms University in Berlin and the Rhenish Friedrich Wilhelms University . In 1914 he was in Bonn at Hermann Jacobi with a dissertation on the doctrine of Karman in the philosophy of Jain doctorate . During the First World War he was an employee of the Foreign Office in its newly founded intelligence center for the Orient . Due to his expertise in the Punjabi and Hindi languages , he also became part of the Royal Prussian Phonographic Commission . The aim of the commission was to record the approximately 250 languages ​​spoken among the internees of the German prisoner-of-war camps.

1918 habilitation he did in Bonn with a thesis on Madhva's system of Vishnu faith and held in May 1918 his inaugural lecture, but could not record teaching due to the chaos of war and finally in April 1920 to Berlin umhabilitiert where he was until 1928 a lecturer taught. In 1927/28 he traveled to India with his cousin Udo von Alvensleben .

In 1928 Glasenapp was appointed to the extraordinary professorship for Indology at the Albertus University in Königsberg , which he held until the end of the war, as the successor to Rudolf Otto Franke . On May 6, 1946, he received the chair for Indology and Comparative Religious Studies of his former teacher Richard von Garbe in Tübingen, which had become vacant due to Jakob Wilhelm Hauer's discharge . In 1959 he was retired ; yet he held until his death in 1963 further lectures , especially in the field of religious studies, while the field of Indology by his successor Paul Thieme was acquired.

Glasenapp traveled to India for the first time in 1927 and undertook numerous other study and lecture trips to various countries in the Orient and to Africa in the decades that followed.

Remained unmarried, succumbed to v. Glasenapp at the age of 72 the consequences of a traffic accident. He found his final resting place in the Bergfriedhof (Tübingen) . His autobiography was published posthumously in 1964 under the title Meine Lebenreise. People, countries and things that I saw.

In addition to numerous individual historical and philological studies on works of Sanskrit literature and German translations of classic Sanskrit poetry, Glasenapp published a number of comprehensive overview presentations on the religions Hinduism , Jainism and Buddhism and their respective philosophies, some of which are still considered standard works today, and which have seen numerous new editions in various languages met with wide reception in India. Glasenapp also examined in several publications the relationship between German intellectuals like Immanuel Kant or Johann Gottfried von Herder and Indian philosophy. 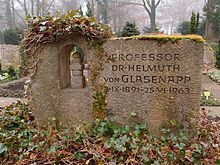 In his will, Glasenapp ordered the establishment of a foundation through the Deutsche Morgenländische Gesellschaft , which he endowed with 150,000 Deutsche Mark share capital and all future royalties from his publications, combined with the condition that the proceeds should be used exclusively and directly to promote German India research. The non-profit foundation was constituted in 1964 and has its seat in Wiesbaden . After Wolfgang Voigt (1964–1980), Heinz Bechert (1981–1987) and Claus Vogel (1988–2012), it has been headed by Harry Falk since 2013 .