Hawaiki is the Māori name for the mythical land in which some Polynesian cultures see their origin and origin.

Hawaiki has a second meaning in many Māori stories, the name for the underworld . In the Mangaia language of the Cook Islands , Avaiki always refers to the underworld.

The Māori name Hawaiki is particularly found in the legends that describe the arrival of the Māori in Aotearoa ( New Zealand ). There are very similar legends in other Polynesian cultures and languages, for example as Hawaiki, Havaiʻi, ʻAvaiki. The term Hawaiki has established itself in English.

The Samoans , one of the oldest Polynesian cultures, no longer have any legends about their origin from elsewhere, but the name of the largest Samoan islands, Savaiʻi , suggests a connection to Hawaiki. It is the same with the name of the most famous Polynesian island of Hawaii . The ʻOkina (ʻ) marks a very short end of the larynx and replaced the k in some Polynesian languages .

Other words related to Hawaiki are saualiʻi ("spirits" in Samoan ) and houʻeiki ("chiefs" in Tongan ). Some scholars have come to the hypothesis that the word Hawaiki (and accordingly the words Savaiʻi and Haiwaiʻi) originally does not necessarily have a reference to a geographical location, but rather refers to ancestors in general and to tribal chiefs, such as those in the pre-colonial social structures of Polynesia were common.

Legend has it that Polynesians colonized the Pacific Ocean from Hawaiki in open canoes that differed little from today's Polynesian canoes. The Māori of New Zealand say that their ancestors arrived in groups in around 40 different canoes ( waka ), and to this day they still call them waka when they introduce themselves.

Other Polynesian legends report that the souls of the deceased return to Hawaiki. In New Zealand, such journeys begin back to the origins in Spirits Bay, Cape Reinga or the Three Kings Islands in the far north of the North Island . This at least suggests the direction of Hawaiki. 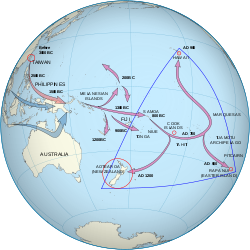 Probable migration of the Polynesians

Anthropologists have long had doubts that it would be possible to voluntarily wander the Pacific in canoes . Rather, it was believed that the migration movements were more of a coincidence, for example through involuntary drifting of canoes in the direction of uninhabited land. In 1947 Thor Heyerdahl sailed with his Kon-Tiki , a raft made of balsa wood , from South America towards the Pacific islands to show that it was possible in principle for the South American cultures to sail the Pacific from the Pacific using simple techniques and sailing with the wind to colonize the eastern shores.

DNA tests later suggested that Polynesians settled from East Asian islands in the Pacific, such as Taiwan . This theory is supported by linguists who classify the Polynesian languages ​​as a major subgroup of the Austronesian languages and see their common origin in Asia.

On the other hand, such a settlement would have to have taken place "against the wind" and therefore not involuntarily and accidentally. It is believed that pre-Polynesian and Polynesian navigators may have followed the directions of birds to find islands beyond the horizon.

The possibility in principle of such a voluntary migration movement has been proven in the last decades by boat builders of the Polynesian Voyaging Society . Canoes suitable for the ocean were built using historical materials and techniques and driven to the corresponding islands using historical navigation methods on the assumed hiking routes.