In 1947 the ideological differences between the emerging Eastern Bloc and the western world became clearer. In the first few months after the end of the war, the commonalities of the four victorious powers in regulating the post-war order were still in the foreground, but the emerging Cold War increasingly divided the previously united war coalition of the Allies. This is particularly clear in the Truman Doctrine , in which the US President warns against "direct or indirect aggression" by "totalitarian regimes" - the Soviet Union is not named, but the reference is obvious.

In the states of central and south-eastern Europe, the communist party was initially only one political force among several; the office of head of government lay in the hands of a bourgeois politician who led a Popular Front government in which the communists were mostly responsible for internal security.

With the help of the Soviet occupying forces, the CP now manages to seize political power in Poland , Hungary , Romania and Bulgaria , using a mixture of legal means and threats; It is not uncommon for the political opponent to be denigrated as fascist and subjected to reprisals. In Czechoslovakia , the communist Klement Gottwald holds the post of head of government, but he first has to consider the twelve middle-class ministers in his government.

Tito in Yugoslavia , on the other hand, leads a socialist people's republic that managed to liberate itself from German occupation to a large extent and can therefore appear self-confident in relation to the Soviet Union and the emerging Eastern bloc .

In the Soviet Occupation Zone (SBZ) the development towards a reorganization of society also continues. The communist-oriented SED has been the dominant force in the country since the forced unification of the SPD and KPD to form the SED in April 1946. In 1947, important points were also set in the economic field; thus the German Economic Commission is set up, which controls economic life in the SBZ centrally from East Berlin.

Since meanwhile economic life is being rebuilt on a capitalist basis in the western zones of Germany, a uniform economic policy for Germany is increasingly becoming impossible. Offers by the USA to also support Eastern European states and the Soviet Zone with Marshall Plan aid are viewed by the Soviet Union as Western propaganda; the Soviet Union forces Czechoslovakia to revoke the announced acceptance of aid. The conference of the prime ministers of the four zones of occupation ( June 5th and 6th, 1947 in Munich ) is broken off without result. On January 1, 1947, the British and US American zones were merged into the Bizone ; this appears as a further step towards the division of Germany .

The hunger winter of 1946/47 is extremely cold; there is a lack of food, fuel and much else. At the beginning of May 1947, the ration cards stated a thin slice of bread every day and 210 grams of fat every month. The summer becomes extremely hot (summer of the century ); there are crop failures . Many people die from malnutrition and infectious diseases. Another very cold winter of 1947/48 further aggravated the situation.

The Truman Doctrine referred to specifically refers to the states of Greece and Turkey , to which Truman promised aid of 400 million dollars.

In March 1946 , communist insurgents started the Greek Civil War in Greece . They are supported by communist neighbors Albania , Yugoslavia and Bulgaria . Great Britain supported the Greek army with weapons and military advisers until March 1947 and then asked the USA for support. The US supported Greece under the Truman Doctrine beginning March 12, 1947.

Malta is granted self-government as a parliamentary democracy by Britain.

The influence of the Soviet Union in Iran can be successfully pushed back. In Iran, with the help of Soviet troops, the Kurds and Azerbaijanis had their own state system directly on the Turkish border (see Iran Crisis ); these will be reintegrated into the Iranian state after the withdrawal of the Soviet troops (more here ). 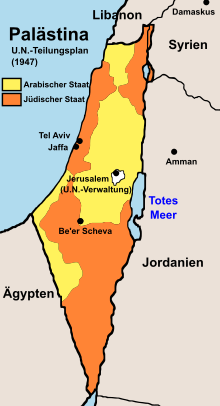 Meanwhile, tensions in Palestine have less to do with international bloc formation than with religious differences. In Palestine, the immigration of Jews has assumed increasingly dramatic proportions. The sending back of the “Exodus” refugees to Europe, even to the hated Germany, caused an international sensation and documented for many that the British authorities were overwhelmed with the problem. The question of how to proceed after the planned end of the British mandate in Palestine in May 1948 is also a concern of the UN, which is drawing up a partition plan, which, however, has met with fierce criticism from Jewish extremists and on the Arab side. The attacks on the British occupying power and the incidents between Jewish settlers and Palestinians are becoming even more acute.

In the Republic of China , the advance of the communist troops under Mao continues slowly without any significant breakthroughs in the civil war there.

British India gains independence in August and is divided into two independent states , India and Pakistan , under the Mountbatten Plan . More than ten million people are resettled in the other country. Tensions between Muslim Pakistan and Hindu India immediately erupted over the question of which of the two new states Kashmir should belong to. The population of this principality is religiously mixed. Maharaja Hari Singh 's decision to join India prompts Muslim militias, backed by Pakistan, to begin operations in western Kashmir on October 22. Indian troops then land in the Kashmir valley and the First Indo-Pakistani War ensues . This ends on January 1, 1949 with an armistice (without a peace agreement) with a de facto partition of Kashmir.

In Japan, under the American occupation government, the post-war constitution is enacted, which contains some unique formulations such as Article 1, the tennō as the "symbol" of the state, and Article 9, the renunciation of war.

With the February 28 incident , a popular uprising begins. 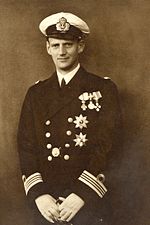 In Thailand , influential army officers stage a coup against the civilian government of Thawan Thamrongnawasawat