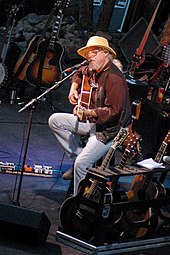 Arlo Guthrie with the Thuringian Symphony Orchestra under the direction of Oliver Weder at TFF.Rudolstadt , 2010

The composer, singer and guitarist is the son of folk legend Woody Guthrie (1912–1967) and the dancer Marjorie Mazia Guthrie (1917–1983). His sister is the record producer Nora Guthrie. The parents of the two were Protestant (father) and Jewish (mother). Arlo initially grew up Jewish (one of his religious teachers was Rabbi Meir Kahane ), converted to Catholicism in 1977 and later professed an interfaith faith.

Arlo Guthrie graduated from Woodward School in Clinton Hill, Brooklyn, the first eight grades and in 1965 attended the Stockbridge School in Massachusetts. He was also briefly enrolled at Rocky Mountain College in Billings, Montana. He received an honorary doctorate from Siena College in 1981 and the same honor from Westfield State College in Massachusetts in 2008.

Arlo Guthrie made his first appearance at the age of 13 and continued the musical tradition of his father. In addition to his father, Pete Seeger was one of his teachers. His musical development also influenced Leadbelly , Cisco Houston , Ramblin 'Jack Elliott , Sonny Terry and the Weavers , who were known to the family.

Arlo Guthrie has four children, including daughter Sarah Lee and son Abe , with whom he toured with Gordon Titcomb . His wife Jackie, with whom he was married for 43 years, died of cancer on October 14, 2012 at the age of 68.

On the 40th anniversary of the Woodstock Concert in 1969, Arlo Guthrie gave the New York Times an interview in which, among other things, he revealed that he had become a member of the Republican Party years ago .

Guthrie's career began in 1967 at the Newport Folk Festival with the 18-minute Alice's Restaurant Massacree . The bureaucratic and military-critical story, presented in chant , is about Arlo's visit to the hippie couple Alice and Ray, his conviction for illegal garbage disposal and the exemption from military service as a result. Since the trigger for the decommissioning occurred on Thanksgiving Day , the extra-long piece is still played on this day by radio stations in the USA. In 1969 the song by Arthur Penn was filmed with Arlo in the lead role as Alice's Restaurant .

By the age of 20 Guthrie toured overseas and in 1969 he performed at the Woodstock Festival . There he performed his version of Amazing Grace and Bob Dylan's Walking Down the Line . With the exclamation “The New York State Thruway is closed, man!” After Coming into Los Angeles , he caused cheers in the audience; due to the large crowd, there was a traffic chaos on an important interstate highway . Around 1972 Guthrie introduced Steve Goodman's City of New Orleans , included on the LP Hobo's Lullaby , in Germany. Even 40 years later, the song with the line Good Morning America is regularly played overseas / in Europe.

In 1991 Arlo Guthrie bought Trinity Church, known from the film Alice's Restaurant, and set up an intercultural and interfaith Guthrie Center in it . In 1992 he was nominated for a Grammy Award for the album Woody's 20 Grow Big Songs , which he had recorded with his sister Nora, the director of the Woody Guthrie Archives, and his brother Joady . Another Grammy nomination for Best Children's Music Album in 1997 was This Land Is Your Land . Guthrie has mastered a variety of instruments, has appeared as an actor and has authored an award-winning children's book Mooses Come Walking . Even now the folk singer is on tour almost every year. In Germany, Arlo Guthrie toured several times with Hans-Eckardt Wenzel , with whom he also recorded a CD together in 2010 ( Every 100 Years live on the Wartburg). In 2011 he also performed songs on a summer evening with Hans-Eckardt Wenzel .