Alice's Restaurant is an American movie from 1969, which on the song Alice's Restaurant Massacree of Arlo Guthrie is based. This tragicomic music film was directed by Arthur Penn , who also wrote the script together with Venable Herndon . The film had its world premiere on August 20, 1969 in the USA. In Germany he was first seen in the cinema on February 19, 1970. 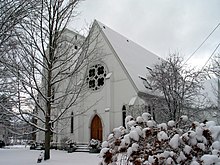 The church, the site of the story, is now the seat of the Guthrie Center

In the late 1960s in the United States: To provisionally from military service to be exempt, enrolls Arlo Guthrie for a college -Studies one. Of course, the sensitive but also rebellious boy doesn't last very long there. After his first warning for alleged damage to property (in reality, Arlo was provoked into a fight by a group of " rednecks ") he voluntarily packs his things and returns to New York .

After a visit to his terminally ill father Woody Guthrie , he hitchhiked on to Alice and Ray, hippies and friends of his who bought a church to build a home for themselves and a meeting place for like-minded people. In order to be able to finance herself, Alice opens a restaurant with the help of her friends and is soon overwhelmed because she does not have enough time to be there for her friends, to pursue her own interests and to run a restaurant at the same time.

Another problem is Shelly, an ex- junkie who lives with Alice and Ray to stay clean with them far from the big city . Soon more develops between Alice and Shelly, which in turn leads to tension in the community.

The end of the film is relatively open; after Alice and Ray get married a second time, it becomes apparent that their relationship lacks harmony and cohesion. The last scene shows Alice in her wedding dress, her face doubtful.

The film magazine VideoWoche said the film was a critical and largely melancholy hymn to the hippies and their communities.

The evangelical film observer has a less positive opinion : "Despite all the advance praise, it is only moderately entertaining, not provocative for anyone, and at best unconsciously addresses the reasons for the end of the hippie movement."

The lexicon of international films, on the other hand, judges quite differently : "Narrated in the wistful tone of a retrospective chronicle, but funny, original and staged with gentle anarchist humor by" New Hollywood "director Arthur Penn".

Arthur Penn was nominated for Best Director at the 1970 Academy Awards, but had to admit defeat to John Schlesinger ( Asphalt Cowboy ) . Arlo Guthrie received a nomination for the British Film Awards for Best Score .

At the 1970 Laurel Awards , Alice's Restaurant was ranked 3rd in the Best Comedy category . The Writers Guild of America nominated Venable Herndon and Arthur Penn for Best Original Screenplay in a Drama .

One must believe in it | Light in the dark | Mickey One | A man is being hunted | Bonnie and Clyde | Flesh and Blood | Alice's Restaurant | Little Big Man | Munich 1972 - 8 famous directors watch the games of the XX. Olympics | The hot trail | Duel on the Missouri | Four friends | Target | Dead of Winter | Death show | The Portrait | Lumière et Compagnie | In the face of freedom