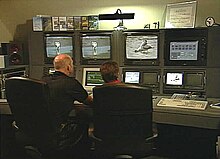 A film editor or editor (older names: cutter , cutter ) is a person who at the filming resulting raw material of a film or television production by the section and the mounting designed. The editor selects suitable settings , arranges them dramatically and rhythmically effectively in sequences , adds sounds, music, effects, graphics and animations and gives the film its final shape. Film editors are thus among the co-authors of an audiovisual work.

The technical and creative demands on the job are constantly changing; Video editing and digital media in particular led to upheavals in the job description. The job title has also changed: since the beginning of the 21st century, the term film editor and editor has been used increasingly in Germany, Austria and Switzerland , displacing the formerly more common terms cutter and editor .

The editor carries out his work in consultation and cooperation with the film director and / or the editor and the producer . His work (the editing room Engl. "Edit suite / room" or "Cutting Room"). Was this used to be a place for the mechanical Editor on cutting table , his equipment has changed fundamentally, through to computer-based, non-linear digital editing . The diverse areas of work in which film editors work include: feature films and documentaries for cinema and television, work in the field of film journalism (current TV reports , news or magazine articles ), television series , business films , advertising , music videos , educational films and Internet-based media. Due to the different requirements in the individual sectors, editors are usually specialized in a few areas, often also in certain technical systems.

An editor combines the staged or documentary image and sound material into a coherent unit by means of rough cut and fine cut . In doing so, he interprets the imagery of the camera and discusses the content and design options with regard to the requirements of the author or filmmaker. The editor knows the technical guidelines of the broadcasters and is guided by the design specifications of the individual television formats .

Several film and television academies and journalism schools offer courses or training and further education in the field of editing / editing and digital media production. Bachelor courses in audiovisual media , media technology and media production have emerged at some universities of applied sciences . In order to do justice to the increasing digitization in the media production process, there have also been apprenticeships for film and video editors and media designers since 1996 . See also training in post-production .

Editors have to train regularly in the different software and hardware products, as these are continuously developed.