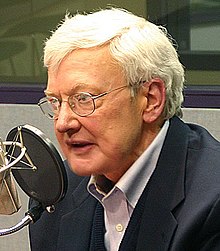 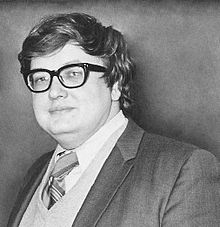 Roger Joseph Ebert (born June 18, 1942 in Urbana , Illinois , † April 4, 2013 in Chicago , Illinois) was an American film critic and screenwriter . He wrote for the Chicago Sun-Times and was considered the most important film critic in the USA. In 1975 he received the Pulitzer Prize, which was awarded for the first time that year for film reviews .

Roger Ebert grew up as the son of Walter H. Ebert and Annabel Ebert in Urbana, Illinois. His ancestors on the paternal side were immigrants from Germany, on the maternal side they come from the Netherlands and Ireland. As a student at Urbana High School, he took an interest in journalism and wrote his first sporting articles for the News Gazette in Champaign , Illinois. With articles in science fiction fan magazines, such as Richard A. Lupoff's Xero , he began a career as a writer and, towards the end of his school years, was co-editor of the Echo , the newspaper of his high school. In a competition with (simulated) radio broadcasts, Ebert won the 1958 Illinois High School Association State Speech Championship . In addition to the University of Illinois , Ebert briefly studied at the University of Chicago and the University of Cape Town. His doctoral thesis remained unfinished due to the double burden.

Ebert had been employed by the Chicago Sun-Times since 1966 and took on the position of film critic there the following year, which he held until his death. In addition to the Chicago Sun-Times, around 200 newspapers worldwide regularly printed Ebert's reviews in the 2000s. In 1975 he was the first film critic to receive the Pulitzer Prize for Reviews . In the same year he started the television program Sneak Previews with his colleague Gene Siskel from the Chicago Tribune on the local television station WTTW . The show quickly gained popularity and from 1977 it was broadcast across America by the PBS station. In this roughly half-hour weekly program, they discussed films - mostly currently in cinemas. The show made Ebert and Siskel very well known. In 1982 they changed the production studio and from then on ran the program At the Movies , which was based on the same principle. Siskel died in 1999. He was succeeded in September 1999 by Richard Roeper of the Chicago Sun-Times . The show was called Ebert & Roeper and ran until August 2008.

Every year Ebert published a book with the previous year's film reviews. He has also published a book on film clichés and books with his top and worst rated films. He also hosted the annual Roger Ebert's Overlooked Film Festival in Champaign.

Since July 18, 1992, Ebert was married to the lawyer Charlie "Chaz" Hammel-Smith. In early 2002 he developed papillary thyroid cancer , and in 2006 he lost the ability to speak, eat and drink during the course of treatment. Since then, he has been fed a tube and used a voice computer . Despite further health problems in the following years, he worked as a film critic until his death. On June 23, 2005, he was the first film critic to receive his own star on the Hollywood Walk of Fame at 6834 Hollywood Blvd. Roger Ebert died of cancer on April 4, 2013 at the age of 70.

Style and views on the film industry 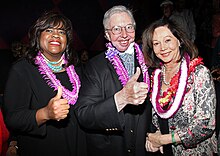 For decades, Roger Ebert rated his films on a four-star scale, with four stars being the maximum. However, he always pointed out that the points awarded are never absolute and always reflect his opinion in relative terms. He represented quite unpopular opinions, popular films like Blue Velvet and Die Hard received negative reviews, while films with scathing reviews like Speed ​​2 - Cruise Control and The Hot Spot - Play With Fire were positively rated with three stars by him. He usually wrote negative reviews with a biting sense of humor. He often brought personal anecdotes into the reviews, occasionally he also abandoned the normal text form and reviewed e.g. B. in the form of songs, poems, open letters or dialogues.

Ebert's taste in film ran throughout film history and all genres, he reviewed both undemanding blockbusters and arthouse films. Ebert Orson saw Welles ' Citizen Kane (1941) as the most important film, but his personal favorite was The Sweet Life (1960). At the other end of the scale was Rob Reiner's film North , which Ebert didn't even award a star. Although Ebert rejected lists of the best films, he published his four-star films in several volumes under the title Great Movies . In other books his review also appeared with a maximum of two stars. Ebert's favorite actors were Robert Mitchum and Ingrid Bergman . Ebert also formulated the Stanton-Walsh rule , according to which a film in which Harry Dean Stanton or M. Emmet Walsh play a supporting role cannot be completely bad.

Ebert was an outspoken opponent of the Motion Picture Association of America's film rating . He repeatedly criticized the age recommendations she gave as too low. Ebert also regularly complained that cinemas outside of major cities also only showed typical Hollywood films instead of taking local interest into account. This makes it almost impossible for most American moviegoers to see valuable independent films or foreign films.

Roger Ebert was a proponent of the Maxivision -48 process, in which the film shows 48 instead of the usual 24 frames per second. He was against the practice of lowering the light intensity of the projectors in cinemas in order to extend the service life of the lamps. According to Ebert, this has little effect and also makes it more difficult for the viewer to perceive the film visually. However, he was skeptical about the return of the 3D films , he found them unrealistic, almost always too darkly photographed and confusing.

Ebert was an avid hobby cook and in 2010 published The Pot And How To Use It, a book with recipes for the rice cooker .

In addition to seven nominations for an Emmy in the Outstanding Informational Series category , Ebert received the following awards: