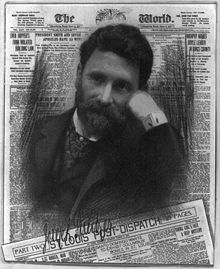 The Pulitzer Prize , officially the Pulitzer Prize , is an American media award for outstanding journalistic , literary and musical contributions. Since it was founded in 1917 by Joseph Pulitzer , the award has enjoyed a similar reputation as the Oscar in the film industry. With its awards for novels and non-fiction books , it is the most important contemporary American literary award . There are also reports excellent, photos, cartoons, poetry, plays and musical recordings.

Every year, the Pulitzer School of Journalism at Columbia University in New York announces the winners, who are selected by a jury made up of American journalists and publishers . The prize money is approximately $ 15,000 per category . The most prestigious award is the award of the gold medal to outstanding newspaper houses for service to the public , officially the Pulitzer Prize for Public Service .

The winners are usually announced at the end of April. The award ceremony takes place about a month later during lunch in the Columbia University library.

In 2010, the prize was awarded to an online publication for the first time. Journalist Sheri Fink ( ProPublica ) won the Investigative Journalism category for an article about the work of a hospital in New Orleans after Hurricane Katrina .

In response to the often criticized low consideration of minorities in awarding the award, the African-American author Ishmael Reed initiated the American Book Award in 1980 , which is donated annually by the Before Columbus Foundation .

Over the years, Germans also received the Pulitzer Honor. The first well-known German award winner was the photographer Anja Niedringhaus , who won the 2005 award in the “Breaking News Photography” category. Another German winner is Daniel Etter , who was also one of the 2016 winners in the “Breaking News Photography” category. In 2017, the two German investigative journalists Frederik Obermaier and Bastian Obermayer stood on the stage of the award ceremony at Columbia University and accepted the award - as members of the Panama Papers team - in the "Explanatory Reporting" category. As another author named in the ICIJ texts submitted, the German journalist Petra Blum is one of the direct winners.

This article or section needs to be revised: In some categories the reasons given by the jury as to why the winners were recognized are missing. (See: English / French / Spanish Wikipedia)
Please help to improve it , and then remove this mark.

The most important of the award categories is the public service , whose winners have received the Pulitzer Gold Medal since 1918 in addition to the prize money.

The Pulitzer Prize is currently awarded in the following 23 categories (including the Special Prize):

Several categories have been discontinued, expanded or renamed over the years: