Pasteurization [ ˌpʰa.stø.ʁiˈziː.ʁʊŋ ] or pasteurization describes the brief heating of liquid or pasty foods to temperatures of at least 60 ° C (classic Pasteur process) to a maximum of 100 ° C ( high pasteurization ) to kill the vegetative phases of microorganisms . It serves z. B. to make food, including milk, fruit and vegetable juices and liquid egg , gently durable (low in germs).

The short, 15 seconds to a few minutes of heat exposure and the moderate temperature change the nutritional value, taste and consistency of the food only insignificantly and yet most food spoilers such as lactic acid bacteria and yeasts as well as many pathogenic bacteria such as salmonella are reliably killed. Heat resistant bacteria spores like those of botulinum Clostridium , the causative agent of paratuberculosis and spores of some fungi survive this treatment at least partially. For this reason, the microorganism content of the raw material should be kept as low as possible.

Since they are not germ-free, pasteurized foods usually have to be stored in a cool place and can then be kept for a few days to a few weeks. This should be distinguished from sterilization at temperatures of over 100 ° C, which also kills heat-resistant bacterial spores. Sterilized food can be stored much longer and without refrigeration than pasteurized food, but it loses its nutritional value and taste more when it is heated.

The pasteurization process was named after the French chemist Louis Pasteur and developed in 1864. Pasteur recognized that briefly heating food and other substances would kill most of the microorganisms contained in them. If substances treated in this way are in a closed area, no new microorganisms can penetrate into them. With the help of a specially made glass flask , the Pasteur flask , this method was demonstrated very impressively. This can significantly increase the shelf life of foods. At the same time, the spontaneous generation thesis was refuted with this attempt . 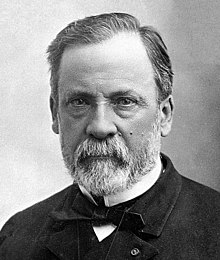 As early as 1795, the cook, confectioner and inventor Nicolas Appert used heat preservation in the form of boiling . Pasteur's proof that food spoilage is clearly caused by living things and is not an abiotic process, as many of his contemporaries assumed, is a preliminary attempt to develop a systematic application of this process in the 1860s. To prove this, he filled two glass flasks with freshly cooked bouillon . He left one of them unlocked, and placed an S-shaped curved glass tube on the other, which allows the gas pressure to be equalized between the fermentation chamber and the environment, but prevents particles from penetrating (so-called fermentation tubes ). He boiled the bouillon again in both glass flasks and then observed the development of the contents of both flasks over a longer period of time. The contents of the unsealed flask spoiled more quickly, while the bouillon in the flask with the fermentation tube remained edible for a longer time.

Pasteurization of milk and dairy products

The best known is the pasteurization of milk , which is heated to 72 to 75 ° C for 15 to 30 seconds and then immediately cooled again. Pasteurized milk, stored unopened at 6 to 7 ° C, remains almost unchanged for about 6 to 10 days.

In high pasteurization, milk is heated to between 85 and 134 ° C. The resulting "highly pasteurized milk" is almost sterile and has a much longer shelf life than the usual pasteurized milk (in the refrigerator at 5 ° C for about 2 weeks). It has also been offered as ESL milk in Germany since 1990 . Pasteurization at temperatures above 135 ° C is called ultra-high temperature and leads to long-life milk .

In the European Union , according to Regulation (EC) No. 853/2004, heat treatment is required by law for all traded milk types with the exception of raw and preferred milk . Milk products that are packaged and intended for sale to consumers are referred to as “ ultra-high temperature” when they have been heated to temperatures of 135 to 150 ° C and “heat treated” when they have been heated to temperatures of at least 50 ° C. Raw milk cheese must be labeled as such and should be avoided as a preventive measure by pregnant women and people with a weakened immune system . In Australia and New Zealand , with a few exceptions such as Roquefort , only pasteurized or thermized dairy products have been allowed on the market since 1994 .

The pasteurization of milk and milk products does not go back to Louis Pasteur, but was only realized later by Franz von Soxhlet .

Open eggs are perishable foods that can be preserved by pasteurization. As with milk, the heating can be carried out in the flow process with plate or tube heat exchangers, but also in batches for smaller production quantities in containers with, for example, 60 or 120 liters. One problem is that liquid egg is not very heat-resistant, but rather coagulates at low temperatures: egg white at 62 ° C, egg yolk at 68 ° C, whole egg at 66 ° C. For this reason, only continuous heating at lower temperatures is possible. Possible process parameters for pasteurizing liquid egg are, for example:

(Other sources give different values, for example for whole eggs: 65 ° C, 5 min.) When sealed, pasteurized eggs can be kept for a few days to a few weeks at temperatures of up to 4 ° C. After opening, there is a risk that the egg will come into contact with microorganisms again and be colonized by them (recontamination). Therefore, pasteurized liquid egg must be kept cool after opening and consumed within a day.

Other foods such as wine , fruit juice or beer are also often pasteurized by the food industry or made from pasteurized ingredients and placed on the market. In these areas, the treatment is usually referred to with the abbreviation KZE (short-term heating). In combination with pasteurization, acidic products with a pH value of less than 4.5 can be preserved in such a way that refrigerated storage is not necessary. This group includes many fruit and vegetable juices or preserves and u. a. Lemonades and energy drinks.

In addition to food, other products can also be pasteurized, for example sewage sludge or liquid manure .

Other methods of preservation are