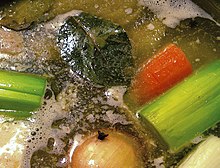 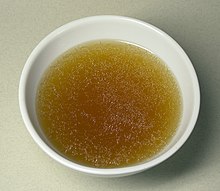 Broth ( mhd. Brüeje "hot liquid"), called (clear) soup in Austria , bouillon in Switzerland , mainly in the German kitchen language water, the food cooked in it, such as meat or vegetables, with flavors , minerals and fats is enriched. Broth is used as a basis for soups , sauces and as a cooking liquid for meat , poultry , fish and vegetables ; Food that is cooked in it remains tasty, as the broth already contains flavors and minerals, some of which are transferred to the food, and do not remove such substances alone.

To make a broth, vegetables, bones, meat, poultry or fish, also in combinations, are used depending on the purpose. The fats and proteins contained in it are dissolved by heat and other substances get into the liquid by osmosis . In order for a broth to be particularly aromatic, the ingredients should already be put in cold water and only salted towards the end of the cooking time - the osmotic gradient is particularly high and more substances diffuse into the water. In order to protect volatile flavors, broths are not boiled in a bubbly manner, but just heated to the boiling point.

During cooking, especially shortly after the boiling point has been reached, skimmings of coagulated protein form, which should be removed. If the broth is ready after about one to three hours, depending on the ingredients, it can be clarified ; it removes unwanted suspended matter. For this purpose, beaten egg white is boiled in the previously sieved broth, which binds the suspended matter to itself when it coagulates. The broth is then filtered through a hair sieve or a cloth. Finally, if necessary, the broth is defatted. This can be done by carefully skimming, vacuuming with kitchen paper or by cooling the broth and then removing the solidified fat.

In addition to the respective basic ingredients, soup greens , onions and spices such as peppercorns , cloves and bay leaves are usually also cooked.

Strongly boiled down broths are generally called fond . They serve as a classic sauce base.

The commercially available concentrates for broth, such as stock cubes or granular broth, usually consist predominantly of salt, fat, seasoning , flavor enhancers and spices and contain little or no meat or vegetables and are not a substitute for a manually prepared broth; The funds available in liquid form are also composed similarly and only differ in their water content (“liquid stock cubes”).

Meat extract is an exception .