The title of this article is ambiguous. Further meanings are listed under sauce (disambiguation) .

Sauce is a redirect to this article. For the Qatari sprinter and hurdler, see Kenza Sosse . 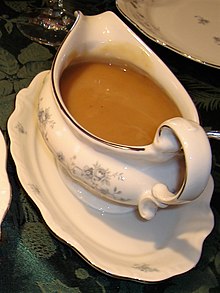 Sauce or gravy (from French sauce , also dunking , broth ; from Latin salsa , `` salted broth '') is a spicy addition to warm and cold dishes , salads and desserts with a liquid to creamy texture .

Already in ancient times there were spicy sauces as garum and its precursor, the elaborately prepared and for many dishes were used. The recipe collection Maestro Martinos from the 15th century, an important source for the food culture in the Middle Ages , mainly describes sauces. The current system of sauces and their use in haute cuisine goes back to French cuisine . In modern kitchens, sauces complement dishes such as fish , meat or pasta to round off or contrast the taste and to increase enjoyment . In ragouts and some salads , they are the connecting element of various solid ingredients. In many cases, the respective dish is also nicer to look at. In addition, they sometimes stimulate the appetite and aid digestion.

Sauces are generally based on aromatic liquids such as funds , wine , oils or dairy products , which are bonded by various methods and thickened (see also setting ). Typically flour ( roux ), starch , egg or cold butter are used for this . Due to the changed consistency, the other food components are combined and ingredients are combined directly with them.

Since the sauce through the combination of ingredients and concentration contained the flavors significantly determined the character and flavor of a court in which it is kitchen staff the position of Sauciers usually the most experienced chef busy.

The Duden recommends the spelling of the loan word “sauce”, while the use of sauce predominates in the German-language specialist literature .

Basic sauces serve as the basis for numerous derivations that result from the addition of seasonings , flavoring ingredients and other foods. They are differentiated according to color, raw material and manufacturing method. The concept of basic sauces originated in classic French cuisine and is still a standard in international gastronomy today. Main ingredients from scratch sauces are depending on bone and Parüren , broths or funds , root vegetables , tomatoes , tomato paste , flour , butter , milk and cream .

A basic distinction is made between warm and cold basic sauces, with the latter only counting mayonnaise . Warm basic sauces, in turn, are divided into white and brown basic sauces and the whipped (warm) basic sauce:

The tomato sauce is often considered one of the basic sauces, while other classifications they regard as self-sauce.

With the so-called independent sauces, only minor modifications are possible. These include: tomato sauce , paprika sauce , and warm English sauces.

Cold sauces are seen as part of starters, salads, entrees and desserts. They are of particular importance in the individual design of buffets , where they enrich the offer with taste and color combinations. Many classic sauces are offered by the food industry as ready -to- eat convenience products, some are even only available in that form (for example, seasoning sauces such as Worcestershire sauce ). Thickened cold sauces, mayonnaise mixes and cheese creams are called "dips" . These are used for dipping ( English to dip , North German stippen ) small snacks and starters .

Dessert sauces are served with desserts such as pudding , flammeri , pastries , sweet casseroles, poached fruits, red fruit jelly or ice cream. The basis is often fresh or frozen fruit, jams , fruit juices and chocolate . Often cream and milk, eggs and sugar syrup are also used. Liqueurs and spirits are used for flavoring. Dessert sauces can be served cold or warm.