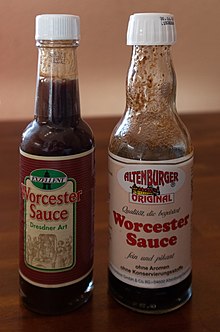 Worcester sauces based on a GDR recipe

The original product from England consists of vinegar , molasses , sugar , salt , anchovies , tamarind extract, onions , garlic , various spices and natural flavors and matures over several years in closed containers. The exact composition and the procedure are a company secret. It is clearly the result of a fermentation process as a thin, dark brown and aromatic extract.

Compared to the original Worcestershire sauce, the other products offered mostly consist of vinegar and soy sauce as a base and can also contain water, mustard , pepper , chilli , fruit pulp and other spices. Often these products also contain artificial flavorings, preservatives and thickeners and therefore differ in taste from the original.

According to legend, the sauce goes back to an Indian recipe that the ex-Governor of Bengal , Lord Marcus Sandys, brought to England in 1835.

The Lord allegedly had this recipe made in the drugstore of John Lea and William Perrins in Worcester . However, the result tasted too hot and was rejected as inedible. According to legend, a barrel of the mixture that Lea and Perrins would have made for themselves was stored in a cellar. When this barrel was opened after half a year, the contents had matured into a spicy sauce. Lea and Perrins then started production.

In reality, however, there was never a governor or other colonial official of that name; Rather, the recipe came from a noble woman, whose mentioning on the label would have violated the rules of propriety at the time, according to Lea & Perrins .

In 2001, however, a company spokesman for the then still independent company Lea & Perrins admitted that all of these legends were the manufacturer's PR inventions by stating that it was probably not the full truth (“God's own truth”) ). The prescription should therefore have been thought up by the two pharmacists themselves. Worcestershire sauce has been in production since 1838 and was initially touted as a digestive aid in the early years .

In contrast to Western Europe, after concentrating on a few manufacturing companies in the GDR, this sauce was mainly produced industrially by the “VEB Exzellent Dresden”. The offer included two products with different recipes with different names:

In view of supply bottlenecks, both variants were not always available to the population, so one of the two names was used for the one available depending on tradition.

The “Worcester Sauce Dresdner Art” is still produced by the successor company of the “VEB Exzellent Dresden” (status: October 2019).