This article covers the region, for the people see Bengal (people) . 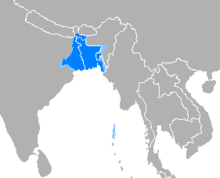 Bengal ( Bengali বাংলা / বঙ্গ : Bānglā / Bôngô ) describes a geographical region in the northeast of the Indian subcontinent with an eventful history. In today's linguistic usage, it is usually understood to mean the Bengali language area , while the borders of the region are not clearly defined. Historically (at the time of British colonial rule) adjacent parts of Bihar , Jharkhand and Odisha were also counted as Bengal.

After the partition of Bengal in 1947 in the course of India's independence from British colonial rule, the Indian states of West Bengal and Tripura were formed in the west of Bengal, and the state of Bangladesh was established in the eastern part in 1971 .

The extremely fertile, stone-free alluvial land region is the namesake for the Gulf of Bengal to the south , a marginal sea of ​​the Indian Ocean .

Bengal became a unified settlement area in the 6th century; the first independent king of Bengal has been handed down from around 606 AD.

The first Buddhist king of Bengal was appointed in Gaur in 750 . The most powerful kings in the subsequent period were Dharmapala (ruled 775–810) and Devapala (ruled 810–850). They united Bengal and made the Pala - Dynasty one of the main ruling families in India the 9th century. Disputes and administrative mismanagement led to their decline under Narayanpala (r. 854–908). A brief revival of the kingdom under Mahipala I (r. 977-1027) finally ended in a war with the powerful southern Indian kingdom of Chola . The Chandra dynasty coming to power in southern Bengal contributed to the further decline of the Pala kings, and in 1161 the last king of the Pala dynasty died.

The Malla dynasty in Bengal had already matured in the 7th century, but did not reach its heyday until the 10th century under Jagat Malla , who moved his capital to Bishnupur . Unlike the Buddhist palas and chandras, the Hindu mallas worshiped Shiva as their main god. During their reign, they built many temples and exceptional religious monuments in Bengal.

Under the Sena dynasty , which ruled from 1095 to 1260, the Bengali language became a separate and important language in northern India and Hindu customs increasingly replaced Buddhist practices.

In the early 13th century, northern India (including Bengal) was conquered by the Muslim Ghurid dynasty . The Sena king Lakshmanasena was defeated in the capital Nabadwip in 1203/1204 by the conquerors under Muhammad bin Bakhtiyar Khilji . The last of the Hindu rulers in Bengal, the Deva dynasty , ruled East Bengal for a short time, then the entire region came under the rule of the Sultanate of Delhi , which gradually became weaker and weaker. In 1352 Shamsuddin Ilyas Shah founded the Sultanate of Bengal , which existed until 1576. This also included parts of Odisha and Bihar at times.

In the 16th century, the Mughals took power in northern India. In 1526, the 1st Mughal Mughal Babur (ruled 1526–1530) defeated Ibrahim Lodi's troops , the last sultan of Delhi, in the First Battle of Panipat . Initially, however, nobody cared about the distant provinces such as Gujarat and Bengal, in which independent sultanates had emerged.

In 1534 the Afghan Sher Shah Suri (or Farid Khan ), a man of high political and military skill, succeeded in defeating the superior forces of the Mughals under Humayun (r. 1530–1540 and 1555/6) at Chausa (1539) and Kannauj Defeat (1540). Sher Shah went on the offensive and conquered both Delhi and Agra and established a rulership that stretched from Bengal to well into the Panjab area . The only five years of his reign (he died in 1545) had a major impact on society, politics and the economy of the Indian subcontinent.

The successors of Shah Suri lacked his administrative skills and they fell out over the continuation of the Bengali Empire. Humayun , who ruled a remnant Mughal state, saw the opportunity and recaptured Lahore and Delhi in 1554. After Humayun's death (1556), Akbar I (ruled 1556–1605) took power, the most important of the Mughal rulers, who defeated the Karani rulers in Bengal in 1576 and transferred rule to governors ( subahdars ). Under Akbar's progressive work, Bengal and northern India enjoyed a period of prosperity in trade and development.

Bengal's trade and prosperity impressed the Mughal rulers so much that they called the region at that time the "Paradise of the Nations". The governor's administration (1575-1717) under the Nawabs of Murshidabad enabled Bengal to achieve limited independence, which was respected by the Mughals in Delhi.

With the advance of the British East India Company , the rule of the Nawabs was decisively weakened. On June 23, 1757, the British defeated the Nawab's forces at the Battle of Plassey and set up a dedicated Nawab for Bengal while expanding their influence to the south of the country. The famine in Bengal in 1770 claimed an estimated ten million lives. It is mostly attributed to the rule of the East India Company.

In 1817, in Bengal, cholera first became epidemic in a new way and began to spread pandemically .

With the fall of the Mughal Empire in northern India, the center of culture and trade moved from Delhi to Kolkata ( Calcutta ). After the uprisings of 1857 , the East India Company was dissolved and Bengal was placed directly under the British Crown. Politically, Bengal was part of the Bengal Presidency under British rule . Queen Victoria received the title Empress of India by the Royal Titles Act 1876 and was proclaimed Empress on January 1, 1877 in Delhi ; the British declared Calcutta the capital of the crown colony of India .

Bengal has always been a center for the cultivation of rice and high quality muslin - cotton , as well as the world's largest producer of jute fibers. Since the 1850s, the country developed into one of the most important industrial centers in India. These were concentrated in the capital, Calcutta, and in its rapidly emerging suburbs. The majority of the population remained dependent on agriculture , however , and so there were a number of severely underdeveloped districts, especially in the western parts of the country, although Bengal as a whole always played a leading role in Indian politics and culture. The forced cultivation of indigo led to the first significant unrest of the rural population against the colonial economic system ( indigo unrest ) in 1859–1862 .

East Bengal with Assam after the partition, map from 1907

On October 16, 1905 India's most populous province (one of the most active in the liberation struggle) was divided by the British - into a western part of the country as the Province of Bihar and Orissa with a largely Hindu population and an eastern part of the country as the Province of East Bengal and Assam with a clear Muslim majority ( Partition of Bengal in 1905 ). Indian nationalists saw this division as a means for the British colonial rulers to sow discord among the Bengali people, who had always formed a unity in language and history. After several violent riots, the British revised the partition of Bengal in 1912. Until the political end of British India, Bengal had the status of a province.

Three to five million people are said to have died during the famine in Bengal in 1943 .

In the course of the division of the former British colony of India according to the Mountbatten Plan in 1947 into a Hindu part and a Muslim part, Bengal was again and still today divided along almost the same border lines as in 1905. The Indian state of West Bengal and the Pakistani region of East Bengal were created. which was renamed East Pakistan in 1958 .

In the period that followed, East Pakistan rebelled against West Pakistani military rule . The resulting struggle for independence led to the Bangladesh War and then in 1971 to the establishment of the independent Republic of Bangladesh .

The Bengal temples, almost without exception made of bricks , with their drawn-down roof ends , differ significantly from the temple architecture of North and South India. Important temple cities are Bishnupur , Antpur , Bansberia , Kalna , Jiaganj (West Bengal) and Puthia (Bangladesh). There are individual buildings in many places in the region.

The Bengali language and literature (mainly represented by Rabindranath Thakur ) is considered to be one of the most beautiful and expressive in all of India.