The title of this article is ambiguous. For the Persian diplomat, see Hussein Kuli Khan Nawab . 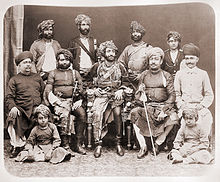 Bahadur Khanji III. (Center), the Nawab of Junagadh (around 1880)

Nawab ( Urdu : نواب; Hindi : नवाब , Navāb ; Bengali : নবাব , Nabāb ; derived from the Arabic word Nāʾib (نائب / 'Deputy, governor'); entered into German in the figurative sense as Nabob ) is a historical title of ruler on the Indian subcontinent (especially in the area of ​​today's India , Pakistan and Bangladesh ).

In the Mughal Empire , the word originally meant an emissary from the emperor or a viceroy; later the title was given the meaning "provincial governor". During the fall of the Mughal Empire in the first half of the 18th century, many provincial governors were able to establish their own hereditary princely dynasties, but retained the title of "Nawab" and continued to rule in the name of the Mughal emperor in order not to challenge the legitimacy of their rule. Then “Nawab” became the typical title of a Muslim ruler on the subcontinent . However, there were also other titles of Muslim provincial rulers such as the Nizam of Hyderabad in particular . Non-Muslim princes were titled as Rajas , Raos or Maharajas .

The name given to the wife of a nawab or other woman of high rank is Begum .

Based on this meaning, a second metaphorical meaning has emerged: According to this, a “nabob” is someone who returns to Europe from the Far East after having made a large fortune there, sometimes with questionable methods, or simply just one Man of great wealth and influence.