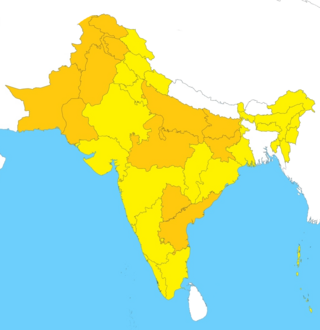 Urdu is the national language as well as the official language in Pakistan and some Indian states with a high proportion of Muslims . In Pakistan only about 7% speak it as their mother tongue , i.e. about 14 million inhabitants. These are descendants of Muslims who immigrated from India, so-called muhajirs . However, in addition to English , Urdu is increasingly being used as the lingua franca between the individual regional languages , is well represented in the media and is a compulsory subject in all schools. As a result, the majority of Pakistanis speak Urdu as a second or third language.

In India it is one of the 22 officially recognized constitutional languages and is spoken mainly in the regions of Delhi , Telangana , Uttar Pradesh , Uttarakhand . In Afghanistan , the majority of the population speaks Urdu because of the great popularity of Indian and Pakistani films. In addition, several million war refugees who lived for years in Pakistan and learned Urdu there have returned to their Afghan homeland. Urdu is also used in poetry in Afghanistan and is taught as a foreign language in Afghan schools. In East Pakistan, now Bangladesh , Urdu was the official language alongside Bengali. Since the population did not want to identify with Urdu as a language, the “anti-Urdu protest” in Dhaka, which in 1971 led to the country's independence, triumphed. Urdu is offered as a school subject in Bangladesh. In addition, a minority of former refugees from Bihar who moved to what was then East Pakistan in the course of the partition of India, speak Urdu as their mother tongue in Bangladesh.

In Great Britain, a large proportion of the 1.2 million British Pakistanis speak Urdu, and most of the approximately 900,000 Muslims of Indian descent also speak . Migration from Pakistan and India also made Urdu one of the most widely spoken languages ​​in the United Arab Emirates.

There are around 95 million native Urdu speakers worldwide, with second speakers the number increases to up to 250 million. Estimating second language speakers is difficult because Urdu and Hindi are almost identical on a simple everyday language level and the 370 million native Hindi speakers understand Urdu on this simple level without having to learn it. In Pakistan, the number of second speakers is difficult to estimate, as the literacy rate is only 56.4% and there are no figures available that adequately speak Urdu.

The term “Urdu” is of Turkish origin and related to Turkish “Ordu” (“army”).

Urdu emerged as an educational language at the time of the Sultanate of Delhi and the Mughal Empire on the South Asian subcontinent (today: Pakistan, India, Nepal, Bangladesh, Maldives, Sri Lanka and parts of Afghanistan) as the Perso - Arabic writing style of the standard language of the Hindustani dialect continuum . The focus of development was the rule of Akbar (1556–1605), in whose huge migrant farms and field camps (up to 70 km in circumference) a multi-ethnic mix of Persians (Persian, the official language of northern India for 300 years during the Mughal period ), northern Indians ( Panjabi , Hindi ), Mongols ( Mongolian ), Turks ( Turkish ) etc. moved.

Political consequences of the introduction as an official language in Pakistan

The decision of the Pakistani government to use Urdu as the only official language led to resistance in what was then East Pakistan (now Bangladesh ), where almost exclusively Bengali was or is spoken, and to the emergence of the oppositional Bengali language movement . On February 21, 1952, an anti-Urdu demonstration in Dhaka claimed several lives when police fired into the crowd. The Feb. 21 was subsequently amended by UNESCO for International Mother Language Day explained.

Relationship between Urdu and Hindi, script

Urdu and Hindi are sociolects or situolects (formal or informal idiom ) of one and the same language, Hindustani , which has developed in northern India since the 13th century in a complex process that has lasted centuries from elements of indigenous prakritic languages as well as a Persian, sometimes Arabic and Chagataisch-Turkish superstrat developed.

A secondary process of differentiation began in the 19th century, during which the social elite resorted to Sanskrit or Persian vocabulary depending on the situation . As a result of the state division of British India into India and Pakistan (1947), this differentiation continued in an intensified form, so that Urdu and Hindi are to be viewed as independent extension languages from an ethno-political point of view .

Hindi is written in Devanagari script and from left to right, Urdu in Arabic-Persian script (for example Nastaʿlīq ) and from right to left.

Traditionally, Urdu is considered to be the “more sophisticated” of the two languages ​​and is also known as the “language of poetry”. (For the differences between Hindi and Urdu, see Hindustani .) In conversations in everyday life, the differences do not cause any significant communication problems even today, not least because Hindi speakers often prefer words of Persian or Arabic origin to neologisms adopted from Sanskrit in everyday use.

Urdu contains a large proportion of loanwords from Persian , Arabic and Portuguese . From Portuguese come e.g. B. the words cabi (from "chave": key), girja (from "igreja": church), kamra (from "cámara": chamber), almari (from "armario": cupboard), sabun (from "sabão" : Soap), balti (from "balde": bucket), qamīz (from "camisa": shirt), mez (from "mesa": table). Over time, Urdu has continued to incorporate loanwords from Turkish and English .