The title of this article is ambiguous. For the British actress of the same name, see Archie Panjabi . 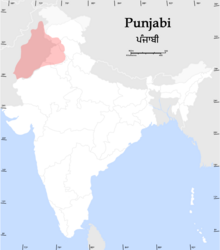 Panjabi , also Punjabi or Punjabi (پنجابی/ ਪੰਜਾਬੀ IAST panjābī [ pʌnˈʤɑːbiː ]) is a language spoken in Pakistan and India . It belongs to the Indo-Aryan branch of the Indo-Iranian subgroup of the Indo-European languages .

Punjabi is spoken in the Punjab region, which is divided between Pakistan and India, and in the worldwide diaspora. There are at least 115 million native speakers of Punjabi worldwide. In Pakistan, according to pre-published results of the 2017 census, almost 81 million people were spoken as their mother tongue. With a share of 39 percent of the total population, Punjabi is the largest single language in Pakistan. In the most populous province of Punjab , Punjabi speakers make up the majority of the population. In India, according to the 2011 census, Punjabi has around 33 million native speakers. Most punjabi speakers live in Punjab state , where they make up the majority of the population. Panjabi-speaking minorities are also found in Haryana , Rajasthan, and Delhi . Due to migration, there is a large Punjabi-speaking diaspora in North America , Europe and the Gulf region . Larger numbers of punjabi speakers live in Canada (430,000), the United Kingdom (270,000 in England and Wales alone ) and the United States (250,000) , among others .

In Pakistan, punjabi has no official status, despite its large number of speakers, and is rarely used as a written language. Urdu serves as the official and educational language . In India, however, Punjabi is recognized as one of 22 constitutional languages ​​and is the official language in the state of Punjab.

The distinction between dialects and individual languages ​​is not always clear in the case of Punjabi. Thus Lahnda or Westpanjabi , a group of more than 20 dialects (u. A. Shahpuri , Multani , Saraiki , Hindko , Pothohari ), although it is a separate language from a linguistic point of view, often seen as a Punjabi dialect. The area of Jammu in the Indian union territory of Jammu and Kashmir spoken Dogri was classified by the Indian government also formerly called Panjabi dialect, since 2003, but it is in the Indian Constitution recognized as a separate language.

Punjabi literature dates back to the 12th and 13th centuries, but didn't really take off until the 17th century when punjabi became the language of Sikhism .

A phonological peculiarity of Punjabi is that it is a tonal language . The stressed syllable can be spoken in three different tones - the constant normal tone, the falling-rising low tone and the rising-falling high tone. In terms of language history, the tones go back to the influence of an aspirated consonant (still present in writing) or an h-sound. Compare:

Punjabi is usually written in its own script called Gurmukhi . To distinguish themselves from the Panjabi-speaking Sikhs, Hindu Punjabi speakers in India sometimes also use the Devanagari script . In Pakistan, Punjabi is written in the Nastaliq -ductus of the Persian-Arabic script , called Shahmukhi , although the written use is rare there.