The state covers the eastern part of the greater Punjab region, which is divided between India and Pakistan . The main language of Punjab is Punjabi , the majority of the population belongs to the religious community of the Sikhs . The capital Chandigarh is also the capital of the neighboring Haryanas , on whose border it lies, and is administered as a union territory by the central government in New Delhi .

Most of the Punjab consists of relatively flat, fertile alluvial land ( Alluvium ). The climate is semi-arid and the whole country is criss-crossed by a large number of irrigation systems and canals. The Punjab can be divided into three major regions: 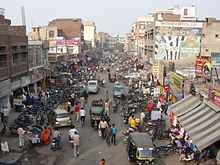 Audience at the flag retrieval at the border crossing in Wagah

According to the 2011 Indian census, the state of Punjab has a population of 27,743,338. This makes Punjab one of the medium-sized Indian states. In terms of population, it ranks 16th among the 29 states of India. With 551 inhabitants per square kilometer, the Punjab is more densely populated than the Indian average, which is 382 inhabitants per square kilometer. Between 2001 and 2011, the population grew by 14 percent and thus a little more slowly than the national mean (18 percent). 37 percent of the state's residents live in cities. The degree of urbanization is thus slightly higher than the national average of 31 percent. The gender ratio is unbalanced: there are only 895 women for every 1,000 men, while the corresponding figure for India as a whole is 943. Among the 0–6 year olds there are only 846 (India: 919).

Punjab census population (within today's boundaries) since the first census in 1951.

The main language of Punjab is Punjabi , which, according to the 2001 census, is spoken by 92 percent of the state's residents as their mother tongue. The state got its current borders in 1966 after the language borders of Punjabi. In addition to the Indian state of Punjab, Punjabi is also spoken in the Pakistani part of Punjab. In contrast to Pakistan, where a variant of the Arabic alphabet is used, the Punjabi in India is written in its own script, Gurmukhi .

Punjabi is the only official language of Punjab. As in all of India, English is widely used as a lingua franca and education.

The Golden Temple in Amritsar

The Punjab is the center of Sikhism : The religion originated in this region and has its most important sanctuary here with the Golden Temple of Amritsar. According to the 2011 census, three quarters of all Indian Sikhs live in the Punjab. With a population of 58 percent, the Sikhs form the majority in the state. The second largest religious community in Punjab are the Hindus , who make up 39 percent of the population. Muslims , on the other hand, are only a small minority at just under 2 percent, as are Christians at just over 1 percent.

Around 1900, the proportion of the population of Muslims in what is now the state of Punjab was almost 40 percent. As a result of the violence that followed the partition of India, the Muslim population was almost entirely driven out of eastern Punjab. At the same time, almost all Sikhs and Hindus fled from Pakistan's western Punjab to India.

Territorial development of the Punjab in independent India (PEPSU = Patiala and East Punjab States Union ). Since the Punjab Reorganization Act of 1966, the boundaries have not changed.

For the prehistory before 1947 see ( Article: Punjab in the section "History" )

With the independence and partition of India in 1947, the western, predominantly Muslim part of the former British-Indian province of Punjab became part of Pakistan, the eastern part, predominantly settled by Sikhs and Hindus, became part of India. During the time of British India , the members of the religious community of the Sikhs had always sided with the Hindus in the conflicts between Hindus and Muslims , without, however, denying their distinct identity. As a result of the division, there were massive violent clashes. Hundreds of thousands of Sikhs and Hindus fled Pakistan to India or were killed. On the other hand, many Muslims from the eastern Indian part of Punjab fled to Pakistan. Lahore , the old capital, fell to Pakistan when this territory was reorganized, whereupon India decided to establish a new seat of government for the state of Punjab. The location chosen was an area at the foot of the Himalayas immediately adjacent to the village of Chandigarh, the name of which was transferred to the new capital.

The massive displacement and displacement resulted in considerable demographic shifts. While the Sikhs had nowhere to form a majority in the old Punjab province apart from a few areas before the partition, they now constituted the clear majority of the population in some western areas of Indian Punjab. The political representatives of the Sikhs, who gathered in the Akali Dal party , demanded the formation of a state in which the Sikhs should have a majority and the recognition of Punjabi as the official language of Punjab. The reason given was that only in this way could the Sikhs preserve their independent culture in relation to the large Hindu majority. Punjabi was recognized as one of the then 14 main languages ​​of India in the Indian constitution, which came into force in 1950. However, the newly formed state of Punjab also included a large number of Hindi speakers who insisted that the state be bilingual. To the disappointment of the Sikhs, their demands for a state of their own were neglected by the States Reorganization Act 1956, which redrawn the boundaries of the states.

Finally, under the government of Prime Minister Indira Gandhi, the Punjab Reorganization Act , which came into force on September 18, 1966, separated the non-Punjabi-speaking areas. A part was annexed to the neighboring union territory of Himachal Pradesh and from the rest the new state of Haryana was created . The common capital of Punjab and Haryana was and still is the city of Chandigarh, which was converted to a Union territory . The Sikhs now formed the majority in the newly reduced state. However, other issues remained. Sikh politicians were partly not satisfied with the new demarcation and, for example, claimed Chandigarh entirely for the Punjab.

Fatalities in violent clashes in Punjab from 1981 to 2000

In the 1970s and 1980s, radical political currents demanding more autonomy for the Punjab gained weight among the Sikhs. Some called for the establishment of its own independent Sikh state " Khalistan ". In 1984, after serious unrest between Hindus and fundamentalist Sikhs , the then Indian Prime Minister Indira Gandhi stormed their highest sanctuary, the Golden Temple of Amritsar , which had been occupied by armed Sikh extremists. The central figure of the fundamentalist Sikhs, Jarnail Singh Bhindranwale , was killed in the process. Over 250 civilians were killed in the storm and the temple was badly damaged. On October 31, 1984, Indira Gandhi was murdered by her Sikh bodyguard . As a result, this led to pogrom-like riots against Sikhs all over India, which killed several thousand people. The state of Punjab fell into a state of emergency in the following years and had to be administered directly by the central government for many years, as the regional government could no longer control the violence. Both parties to the conflict (Sikh extremists and security forces) showed little consideration for the civilian population, who were the main victims of the conflict. It was only after elections were held in the Punjab in 1992 under massive security measures and a local, elected civilian government was reinstated that the violence subsided.

The Punjab State legislature consists of a unicameral parliament , the Punjab Legislative Assembly or Punjab Vidhan Sabha . The 117 members of parliament are elected by direct election every five years . The parliament has its seat in Chandigarh , which is the common capital of the states of Punjab and Haryana and which is itself administered as a union territory directly by the Indian central government.

The Punjab's Chief Minister is elected by Parliament. But is appointed by the President of India Governor (at the head of the State Governor ). Its main tasks are to appoint the Chief Minister and to entrust him with the formation of the government.

The highest court in Punjab is the Punjab and Haryana High Court in Chandigarh, which also has jurisdiction over the neighboring state of Haryana.

Politics in the Punjab is shaped by the Sikh regional party Shiromani Akali Dal (SAD) and the Indian National Congress . Since the late 1960s, these two parties have taken turns in virtually every government election. 2012, the SAD was first time in alliance with its coalition partner, the Hindu nationalist party Bharatiya Janata Party (BJP), repeat their electoral success. As a result of the election, Shiromani Akali Dal and BJP had 56 and 12 seats in parliament, respectively, and jointly had a majority in parliament. The Congress Party was in opposition with 46 seats. Parkash Singh Badal from Shiromani Akali Dal, who had been in office since February 2, 2007, remained Chief Minister . The parliamentary election on February 4, 2017, however, was won by the Congress party. In this election, three large groups faced each other: the congress party, the previous government coalition of BJP and SAD and the "anti-corruption party" Aam Aadmi Party (AAD) in alliance with the small Lok Insaaf Party (LIP). Amarinder Singh (INC) became the new Chief Minister on March 16, 2017 . 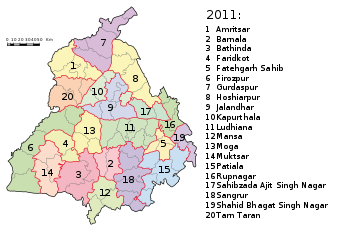 The state of Punjab is divided into 22 districts (data from 2011 census):

In early 2016, there were 10 municipal corporations in Punjab . 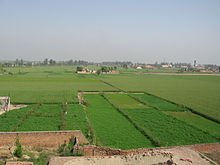 Agriculture in the Punjab

The economy of the state of Punjab is traditionally shaped by agriculture and the medium-sized tool industry . Especially around the capital Chandigarh a belt of z. B. bicycle manufacturers , weaving machine manufacturers , auto suppliers , food processing industry, etc. settled.

But the office and computer industries also settled in Punjab, B. Dell , Hitachi , Fujitsu , Kenwood , Motorola , Olivetti and Quark Inc.

With a per capita gross domestic product of 92,350 rupees (2,026 US dollars ) in 2015, Punjab was 10th out of 29 Indian states. The state's development indicators are generally above the Indian average, with the rate of malnutrition at 2.2% of the population, the lowest in all of India.

For several years now, massive drug use among adolescents and young adults has become a major social problem . According to a comprehensive official government study from 2015, around 860,000 people in Punjab used opiates at least temporarily for the purpose of intoxication. Of these, an estimated 230,000 were opiate addicts (around 1.2% of the population; Indian average around 0.7%). About half of these people used heroin , a third used opium, and the remainder used various drugs. One third of the addicts were intravenous drug users. The typical drug addict was characterized as "young, male (over 99%), Punjabi-speaking, and from the lower middle class". The cited study also found sobering that - although urgently needed - there are hardly any facilities for the treatment of drug addicts in Punjab. The source of the opium and drugs derived from it is Afghanistan. Sophisticated smugglers' networks smuggle drugs across the Indian-Pakistani border - e. B. in the form of drug-laden, floating car tires on the rivers.